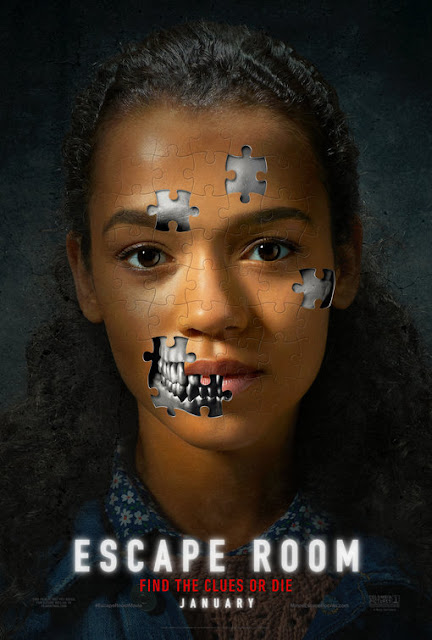 Six strangers have all been given an invite to try out a new escape room. If they can manage to get out, they'll get $10,000. The eclectic group of individuals includes timid college student Zoey Davis (Taylor Russell), arrogant rich guy Jason Walker (Jay Ellis), stockroom worker Ben Miller (Logan Miller), veteran Amanda Harper (Deborah Ann Woll), chipper Mike Nolan (Tylor Labine) and escape room expert Danny Khan (Nik Dodani). Though Danny's gone through numerous escape rooms in the past, he's never seen anything like the one he and the other five characters must endure. The challenges here are frighteningly real and the consequences of not following all the clues properly are deadly.

Who exactly will make it out of these escape rooms and who won't isn't exactly difficult to parse out right from the very start of Escape Room. The screenplay plays things broadly with its characters, shades of grey really don't belong here save for internally tortured Ben Miller. The arch nature of things is even found in the assortment of supposedly difficult riddles meant to lead characters to important clues that even a dumbo like myself was able to figure out long before in-movie figures caught on. There's little in the way of extreme innovation going on in Escape Room in terms of its characters but there is quite a bit of solid competence, at least most of them have, for instance, coherent backstories which is an outright revelation to see in a horror movie dropped in the first weekend of January

Plus, the characters are brought to life by an assortment of TV and character actors that actually deliver fine work in their roles, particularly Taylor Russell in the lead role of a bookworm so nerdy and timid that she makes Rick Moranis look like Jason Momoa. The various players in the story also work well in their function as entities to be terrified by the various escape rooms well. If there's something this film manages to nail down, it's the sequences involving the escape rooms themselves. Director Adam Robitel relies heavily on fun doses of tension rather than bloodshed in these set pieces which also tend to work better than expected because of editing and writing that ensures that each of the six characters always has something to do in any given escape room, nobody in the case is just sitting on the sidelines waiting to get slaughtered.

The characters aren't at all three-dimensional but at least they serve a purpose when it comes time to figure out how to escape a spooky room. Said spooky rooms are brought to life by some nifty-looking sets, the best of which is an upside-down tavern that houses the best scene of the film as the characters try to figure out a password as the "floor" vanishes beneath them while the Petula Clark song Downtown (what a fun needle drop choice) plays on repeat in the background. It's a truly well-done scene that serves as the apex section of Escape Room whose only drawback is that it comes too early in the overall film, after this the more budget-conscious sets, like a grimy hospital wing and an abandoned warehouse, just stick out like a sore thumb due to their lack of innovation.

Escape Room's closing scenes register as underwhelming beyond just its sets though since the film makes the odd decision to close things out on a bunch of clunky scenes that serve as merely belabored sequel set-up. These kinds of scenes need to be saved for either during or after the credits, not at the tail end of the actual film where it ends up leaving a sour taste in one's mouth. Much of Escape Room delivers some alright suspense thrills that help make its boilerplate narrative tendencies easier to swallow, but that ending really is just poorly executed.  Then again, there are worse ways to close out a horror movie opening in the first weekend of January. They could have, for instance, just cut abruptly to black and then had some on-screen text urge viewers to go check out some website.
Posted by Douglas Laman (NerdInTheBasement) at 2:53 PM