I Laughed, I Cried, Terms of Endearment Moved Me Bob 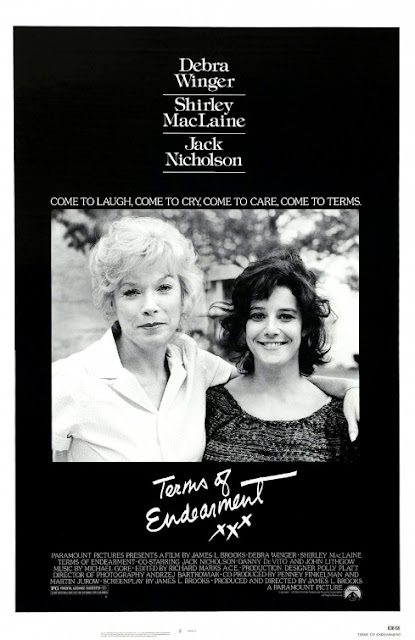 Isn't it such a glorious experience when a movie that's garnered all kinds of hype manages to still take you by surprise with just how good it is? Terms of Endearment, the directorial debut of James L. Brooks, has generated no shortage of praise since its initial theatrical release in 1983, including winning the Academy Award for Best Picture, it's clear a beloved feature even if it isn't quite as widely talked about in modern cinematic conversations as other classic Best Picture winners. Maybe the fact that it isn't so rampantly discussed in the present day world is why Terms of Endearment took me by surprise or perhaps the fact that I was more restrained in my praise of fellow beloved James L. Brooks movie from 1980's Broadcast News is why I was so surprised that I fell head over heels for Terms of Endearment.

Those two elements could possibly factor into my adoration of the film but I'd personally say the reasons why I so thoroughly enjoyed Terms of Endearment are solely related to the virtues of the feature on its own terms. The numerous positive facets of Terms of Endearment come within a story that chronicles the relationship of mother Aurora Greenway (Shirley MacLaine) and her daughter Emma (Debra Winger) over the span of a decade or so, starting off with Emma deciding to get married to Flap (Jeff Daniels). Aurora disapproves of the union, but Emma is not one to simply bow down to the wishes of her mother.

Emma and Garrett proceed to carve out their own life, complete with two kids, while Aurora finds herself becoming enamored with her washed-up astronaut neighbor Garrett (Jach Nicholson). It's an intimate story about two women trying to find their own place in the world through all kinds of mundane obstacles, one that gets so much entertainment out of its vividly realized characters. The screenplay by James L. Brooks pulls off the impressive feat of managing to make hordes of characters with such pronounced dispositions while maintaining a down-to-earth sensibility in the overall story. Since the individual characters are so deeply rooted in recognizably human motivations, desires and personalities that call for them to be realized in a prominent fashion (are individuals like Aurora ever constantly subtle?), Terms of Endearment still maintains a foot firmly in reality while containing an entertaining gaggle of characters that could have easily become one-note caricatures in a weaker movie.

It also helps that the script finds plenty of instances to engage in well-executed subtlety, for instance, a number of key characters moments (like Emma's young son silently going out to the porch to play while his parents argue) are done without the aid of dialogue while the impressively talented cast tends to incorporate subtle elements in their dialogue deliveries or body language that help make their characters feel so very human. There's a fantastic balance between the pronounced and subdued throughout Terms of Endearment, a balance that feels reminiscent of how reality can swing on a dime from being all restrained to being off-the-wall over-the-top madness.

Beyond its intricately realized balance between those two contrasting elements, much of what makes Terms of Endearment work so well are the simplest things. Debra Winger's performance, for instance, is constantly entertaining to watch, there's a genuine outspoken eagerness in her depiction of Emma that can't be taken out completely even by how many struggles she faces in her adult life. Meanwhile, Shirley MacLaine plays the exact opposite kind of character in her terrific performance that sees her getting some great opportunities for deadpan line deliveries, particularly in her scenes with Jack Nicholson's character. Nicholson, for his part, puts his trademark berserk on-screen persona to clever use here as he plays a slimeball who thinks he's got all the charm of Cary Grant.

Watching Nicholson and MacLaine play off each other as their polar opposite characters is a thrilling delight, their humorous back-and-forth exchanges provide some of the best moments of the film as well as chances for both MacLaine and Nicholson to shine as performers. The all-around excellent work from the cast, combined with the engaging screenplay, make a third act heavy on big emotional beats feel emotionally powerful instead of just devolving into a non-stop barrage of schmaltz. Here again Terms of Endearment's keen tendency to know when to break out subtlety comes in handy, as Emma has a number of big emotional sequences that rely on emotional intimacy rather than grand sweeping details to tug on the viewer's heartstrings.

This is especially true in perhaps the best scene of the whole movie, a pivotal climactic emotional sequence that sees Emma talking to her two children in a hospital bed. Michael Gore's score has gone quiet here and the camera movements are limited, it's all coming down to the dialogue and the performances of Debra Winger and the two actors playing her children. Relying on just these elements works spectacularly well, especially in regards to how Winger portrays a woman saying good-bye to her young children while trying to not let them in on the full gruesome nature of the scenario. Her character doesn't linger on what put her in the hospital here, but rather, she emphasizes to her oldest son that, despite his distant attitude towards her, Emma knows that he still his mom. It's a scene that was just staggeringly emotional to watch and it wouldn't have worked so well if Terms of Endearment hadn't been so good at making these characters both entertaining and easy to get emotionally invested in.
Posted by Douglas Laman (NerdInTheBasement) at 10:45 AM