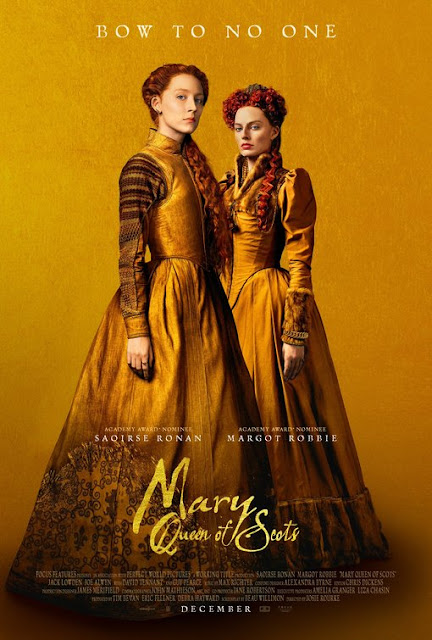 In 16th century Europe, Mary (Saroise Ronan) took up the throne of Scotland, a move that put her as the next in line to inherit the throne of her cousin, Elizabeth (Margot Robbie), the queen of England. Mary's status as a ruler generates plenty of controversies, whether it comes from Elizabeth and her confidantes not wanting her to ascend to the position of Queen of England or it's enraged male members of Scotland society who don't like that a woman is holding a seat of such massive power. Mary's tenure as a leader is full of rebellion and destruction of the norms, but it's also a constant fight for her to be seen as a rightful queen by subjects far and wide and it's a fight that she's more than willing to fight for years on end.

I am no history buff but I do know plenty of them and according to them, Mary Queen of Scots deviates from real-world historical events it's based on to an immense degree. I bring this up not to be the umpteenth reviewer to critique how Mary Queen of Scots doesn't quite adhere to reality but as a way to note how this element contrasts with how the film makes a pointed effort to reflect realistic diversity in a manner that most similar European period piece costume dramas don't ever think to. There are a number of people of color in both supporting roles and in background extras while other players in the story are members of LGBTQA+ community as well as non-binary in their gender identity.

These individuals have always existed throughout history but tragically, many films set in these time periods deliberately choose to eschew representing them, a trend Mary Queen of Scots impressively bucks. Its level of historical accuracy may be askew but at least Mary Queen of Scots is conscious of reality in other ways. That's one of the best aspects of Mary Queen of Scots and indicative of how the best parts of this movie tend to be ones that see it standing apart from similar period piece dramas. The fact that the story is primarily about how societies tend to subliminally pit women against one another is another one of these unique facets of its story that ends up being one of its most distinctive traits.

That part of the story also heavily informs the second and third acts that frequently play like an exciting 16th-century conspiracy thriller with all kinds of double-crosses and uncertainty over who Mary can trust. This bold way of telling this particular historical story is especially entertaining to watch since it allows for some of the best moments of Saroise Ronan's performance in the entire movie. Ronan has excelled in portraying normal human beings in Brooklyn and especially her phenomenal work in Lady Bird and her range as a performer is reinforced here as she naturally emanates a tenacious inspirational quality in her performance of Mary that makes it crystal clear how much of a fight this ruler is.

Margot Robbie, meanwhile, is doing solid work in the role of Elizabeth but she's hampered by Beau Willimon's screenplay that constantly renders sequences focused exclusively on Elizabeth feeling like they're too detached from the primary storyline. The fact that Mary and Elizabeth are residing in different countries was always going to present a challenge in how to make Elizabeth an organic part of Mary's story but there had to be a more satisfactory way of presenting her subplot than scenes cutting back to Elizabeth and her woes that just feel like interruptions in the primary storyline rather than natural extensions of it.

The script also falters in the first half-hour of the story which far too often introduces key characters and plot details in a static fashion that leaves one wondering if they should be taking notes rather than being absorbed by the characters. Once you get the earlier scenes though, Mary Queen of Scots becomes something much more entertaining as director Josie Rourke seems far more comfortable handling the extremely pronounced performances (Ronan is so entertainingly fierce here!) and political thriller vibes that populate the later portions of the story rather than the early clumsy introductory sequence. Though it may have as much to do with actual European historical events as Gymkata, Mary Queen of Scots, once it kicks into high gear, is better than usual costume drama fare with some truly admirable qualities.
Posted by Douglas Laman (NerdInTheBasement) at 12:07 PM