Some Thoughts On The Bonkers Spoilers of Serenity (What A Twist!) 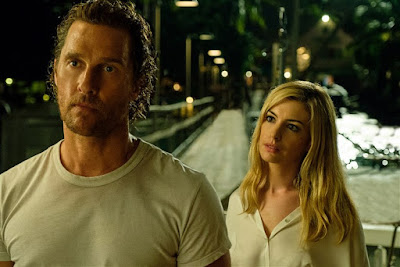 
Serenity is not playing it subtle with its eventual twist considering how often we cut back to Baker Dill's young son Patrick fiddling away with some kind of computer video game throughout the early scenes of the movie. We're told early on that Patrick is obsessed with computer games, particularly one about fishing, and that Patrick has told Karen that he can communicate with his dad through his computer. Such odd details had me guessing what would eventually become the actual twist of Serenity: the remote island Baker Dill is on is actually a creation of Patrick who has created an expansive video game that he can get lost in to escape his abusive parents. The real Baker Dill died in the Iraq War years ago, none of what we've seen is real and serves as an outlet for Patrick to deal with the rage he feels against his stepdad.

It's a ludicrous plot twist that sounds like the basis for a Futurama episode rather than the twist ending in a super serious neo-noir but Serenity just embraces the gimmick whole hog, to the point that an in-game human manifestation of the game's rules, Reid Miller (Jeremy Strong), explains that peculiar habits in Baker's life are actually mini-games in the video game. Making Baker Dill's entire world a video game that his son created only, to quote Futurama character Hermes Conrad, "raises further questions", mainly in why Patrick would make a game where he could play as his Dad porking his Mom. That's just a creepy overtone that this movie never decides to come around to addressing.

That's one of a number of odd plot elements that either never get resolved properly or just end up having no impact on anything. A great example of this is how Duke pays a guy to break Frank's arms so that Frank can't go out to the boat that Baker plans to kill Frank on but such injuries don't really hinder Baker's plans at all, the story just keeps moving along with a nutso climax that manages to wrap up both of Baker's storylines (his desire to catch the fish Justice and his quandary over whether to kill Frank) and has a sequence intended to be moving featuring Patrick killing his stepdad off-screen.  If you thought The Book of Henry was too cowardly in only depicting a kid planning to kill an abusive adult rather than outright showing a kid carrying out said act, good news, Serenity has got you covered. Patrick has murdered a man, still hasn't confronted the heavy undercurrent of incest in his video game and has also somehow called his in-video game father. The last half-hour of Serenity is utter madness, a batshit insane stream of storytelling that's somehow meant to be emotionally moving. As Statler and Waldorf might put it, "Serenity will move you alright...to hysterical laughter!"
Posted by Douglas Laman (NerdInTheBasement) at 8:23 PM

Email ThisBlogThis!Share to TwitterShare to FacebookShare to Pinterest
Labels: Serenity, What A Twist!