Ben Is Back Has Good Performances But Derivative Screenwriting

MILD SPOILERS FOR BEN IS BACK BELOW 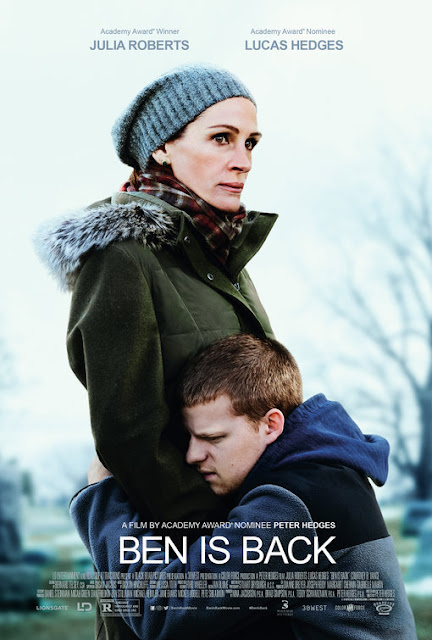 On a seemingly routine Christmas Eve, Holly Burns (Julia Roberts) returns home to discover that her son, Ben (Lucas Hedges), has come home. Ben, the titular lead of Ben is Back,  has been away at a rehab center trying to get clean from his drug habit and now he's returned out of the blue into Holly's life. Holly is at first overjoyed just to see her son back in her life but Ben's siblings and Holly's husband, Neal (Courtney B. Vance), don't like this situation and want Ben to return to the rehab center. Holly proceeds to make her son a deal: he can stay with the family for the next 24 hours but she'll watch him like a hawk, he is to never leave her sight. A task already immensely difficult only increases in how arduous it is as the 24 hours march on and some figures from Ben's past re-emerge to threaten Ben and his family.


Plenty of jokes (including a rejected Golden Globes bit) have referenced the overlap in subject matter and titles in the various films Lucas Hedges and Timothee Chalamet have starred in during the Fall of 2018, specifically in regards to how both Hedges and Chalamet have headlined tales about young men grappling with addiction (the latter did so with Beautiful Boy) in attempts to tackle heady material as dramatic actors. The crew behind Ben is Back, which includes writer/director Peter Hedges, clearly share the same ambition for embracing complex & dark material as lead actor Lucas Hedges, though such ambition doesn't translate into a terribly unique presentation of the experiences of someone suffering from the illness of addiction.

Too often, Ben is Back feels too generic and struggles to put its own spin on familiar storytelling terrain. This is especially noteworthy in the antagonistic drug dealers that eventually become our villains, though they don't have much in the way of screentime, once they arrive in the second half of the story they feel like they've waltzed in from a wholly different film. What's previously been a more grounded drama now has run-of-the-mill baddies from a TNT crime show causing trouble for our lead characters and the portion of the story detailing them having Ben do a job for them while a distraught Holly tries to track down her son is the weakest part of the whole film, especially since it doesn't offer Ben much to do as a character.

The third act dovetailing into a derivative crime thriller is a major part of Ben is Back's struggle to establish its own identity, though at least the earlier parts of the movie tend to be restrained character interactions that do allow the lead actors plenty of time to shine. Lucas Hedges is doing yet another tormented teen role here but he smartly differentiates the part of Ben from his prior performances by making sure there's a well-realized bit of a darker edge to this character. Even in moments of total bliss, Ben is always struggling with his addiction and Hedges communicates that subtly throughout his performance.

Julia Roberts gives one of her strong turns in a blue moon as the mother of Holly. Though her character gets stuck with too many flashy grandiose moments (namely an awkwardly placed visit to a graveyard with her son), Roberts manages to rise above those flaws by bringing both no-BS tenacity and some appropriate realistic weariness to the part. Though his part is small in terms of overall screentime, it's also great to see Courtney B. Vance do well in a surprisingly complex supporting role as Holly's husband and Ben's step-dad, a guy who could have been a one-note villain in another movie but is here rendered as a stern but well-meaning guy that Vance portrays wonderfully.

The performances are the primary stand-out element in Ben is Back while the weakest element has to be the camerawork. Cinematographer Stuart Dryburgh films things in a digital format (I can't seem to find what camera he specifically filmed with) that renders everything on-screen with a weird visual look reminiscent of late-2000's SNL Digital Shorts. It's a distracting trait, particularly when it makes things look like they're moving at a higher frame rate for no reason, that serves no real purpose to the overall movie. Aside from the lackluster camerawork, the rest of Ben is Back is adequate enough that one can enjoy the two exceptional lead performances in a painless manner but one wishes Ben is Back had the guts to explore its lead characters and their complex situation in a more distinctive manner.
Posted by Douglas Laman (NerdInTheBasement) at 12:22 PM