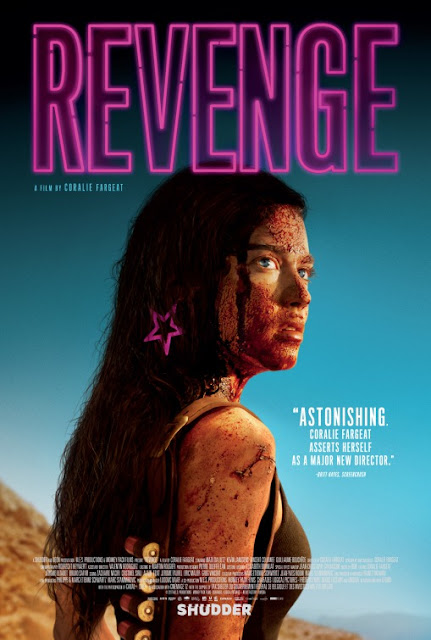 
If you've ever seen any movies from all over the world made since the dawn of cinema, then the sight of a pivotal female character being raped as a way of motivating a male protagonist won't be anything new to you and just typing out that sentence makes my skin crawl. The experiences of people who suffer like this shouldn't be just a throwaway narrative detail, but that's just how it's been treated in movies occupying as diverse of genres as midnight grindhouse fare to classy dramas, mostly due to, among other critical factors, the dominance of men in major filmmaking positions, leaving the perspective of women who might object to how the sexual assault of women is handled in a movie completely absent.

Coralie Fargeat's directorial effort Revenge is a refutation to this creepily common element in cinema in the form of a revenge action movie told from the perspective of a sexual assault survivor whose eventual vengeance is so violent that it makes those middling Taken movies look like The Oogieloves. Fargeat's screenplay doesn't reveal that this is its modus operandi right from the get-go though as it begins the proceedings by acting like any normal male-directed genre movie, complete with shots, taken from the perspective of the stories three male characters, ogling the form of Jen (Matilda Lutz) that are meant to emulate the male gaze that runs rampant through cinema as a medium. This isn't just cut-and-dry mimicry, Revenge is already slyly lampooning elements viewers just go along with in other similar movies, like any of the numerous instances of the camera lingering over Megan Fox's being in the Transformers movies.

These initial sequences, in addition to subtly setting up how Revenge will undermine the status quo, also allow us to get to know Jen and her dreams of moving to Los Angeles before she is sexually assaulted by Stan (Vincent Colombe), a friend of her boyfriend Richard (Kevin Janssens). In a deviation from the films its a response to, Revenge does not depict the actual sexual assault of Jen, though we do get plenty of glimpses into how disturbed she is afterward, a sensation that is only increased once Richard's response to her being sexually assaulted is to try and keep her quiet by way of killing her before Richard, Stan and Dimitri (Guillaume Bouchede) go off on their hunting trip.

Turns out, though, Jen has survived and the creatures that are about to get hunted are these three men, each of which represents a different type of male personalities that are indifferent to the anguish of women. For instance, the frequently silent Dimitri is the type of man who may not punch or rape women himself but he does nothing to stop those who do, he is more interested in his own comfort than helping those in need. Meanwhile, Stan is the sort of guy who believes he's owed women as a prize, women are not people but objects to be obtained once you do a certain amount of good deeds. Finally, Richard is the type of man who seems to be on the up-and-up but will become selfish at the slightest hint of danger to himself, the prospect of his own reputation getting harmed (he's cheating on his wife and reporting Jen's sexual assault would mean that secret would go public) is more important to him than the livelihood of a human being.

Fargeat's writing of these antagonists as human manifestations of various forms of male indifference to female anguish is utterly brilliant and she shows a similar level of remarkable insight when it comes to depicting the interior psychological state of Jen. Though she gets to dish out violent revenge in the second half of the story, Jen does not become invincible after her sexual assault experience. One of the most harrowing sequences of the film depicts Jen in a seemingly never-ending dream filled with reminders of the viciousness she's survived, no matter how many times she's seemingly woken up, she cannot escape the horrors that fill her mind. Surreal editing choices punctuate a haunting sense of searing psychological agony in this well-realized sequence.

The lead performance from Matilda Lutz also excels in this particular scene while she strikes an impressive balance between conveying her character's unrelenting thirst for vengeance with vulnerable humanity in the various gruesome action scenes that make great use out of showing Jen get blood-drenched revenge (hey, that's the name of the film!) on the three men who treated her as an object and not as a human being. Jen isn't just lashing out at Richard, Stan and Dimitri in these sequences, it also feels like Coralie Fargeat fighting back against the default norms of cinema that undermine the experiences of female sexual assault survivors. Hopefully Revenge gets people to reconsider using that trope, it's certainly concievable that a film this good does have the potential to be widely impactful like that.
Posted by Douglas Laman (NerdInTheBasement) at 12:23 PM