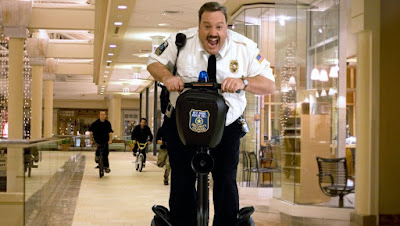 A peculiar observation? Perhaps. But it's also a trait that makes it immediately stand out from other Happy Madison comedies (most of them starring Adam Sandler) like Jack & Jill, Grown Ups and the like. Farts are the bread & butter of these yukfests, so you'd think the first Happy Madison vehicle solely headlined by Kevin James would be packed to the gills with flatulence. Why, the main character's last name even rhymes with farts for God's sake! But in a twist so shocking it might as well have come out of an M. Night Shyamalan movie, not a single soul passes gas in the 2009 Steve Carr directorial effort Paul Blart: Mall Cop, nor are there any other traces of bathroom humor, making one wonder if this really is a Happy Madison production from the 2000s.

There are many ways in which Paul Blart: Mall Cop differentiates itself from its Happy Madison brethren but one element it had in common with the most lucrative of the Happy Madison productions was the ability to generate massive box office. Paul Blart: Mall Cop debuted in theaters on January 16, 2009 and was not expected to do well, with many expecting it to lose family audiences to that weekend's fellow new release Hotel for Dogs. Turns out people were far more interested in Kevin James as John McClane On A Segway than they were in pampered pooches. Paul Blart: Mall Cop managed to exceed all expectations with a $31.8 million opening weekend, at the time the third-biggest opening weekend ever in January (only behind a 1997 re-release of Star Wars and the 2008 feature Cloverfield). Its eventual domestic gross of $146.3 million surpassed all but three of Adam Sandler's starring vehicles at the time and the 19th biggest movie of 2009 domestically.

Ten years later, these numbers are still staggering and beg the question of how this movie managed to resonate so much with general audiences to the point that it's still the source of internet memes in 2019 (more on those later). Well, one can never underestimate the enduring appeal of slapstick comedy, the very type of humor that served as the crux of silent comedies back in the day was still being utilized heavily by the likes of Jim Carrey and Will Ferrell in the '90s and 2000s. This broad format of humor is one of those things that transcends age and class, everyone can understand why the sight of Kevin James absent-mindedly riding his segway into a pillar is humorous. But perhaps there was some deeper catharsis to be found in Paul Blart: Mall Cop for January 2009 moviegoers, catharsis tied into the then-recent economic decline.

The American economic crash of 2008 left, among numerous other consequences, countless people who lived paycheck-to-paycheck out of work. As unemployment lines grew and grew, Americans looked for escapism entertainment that offered up some light-hearted amusement, but they were also seeking the reinforcement of the importance of the kind of minimum-wage workers that had been left in chaos in the wake of recent economic developments. Paul Blart: Mall Cop and its balloon animal duels certainly had the light-hearted amusement part covered but it also managed to fulfill the latter element totally by accident. Though made 10 months before the economic crash began, Paul Blart: Mall Cop's entire story about a plucky mall cop being the last hope to save hostages in a mall was tailor-made for America circa January 2009.

Paul Blart may be a goofball who gets into wacky antics in his day-to-day job but he's never someone the film is explicitly mocking. The guy's optimistic attitude and dedication to doing his job well is clearly shown to be a good attribute that only antagonistic characters mock while his extensive knowledge of every nook and cranny of the mall is shown to be a crucial part of why he ends up saving the day. Here was a chance for moviegoers everywhere, who saw all their hard work amount to only a pink slip, to see an everyday human being save the day aided not by science-fiction abilities but by the down-to-Earth traits that had made him a good employee in the first place. It was a cathartic viewing experience in addition to being a humorous one

It's doubtful, even outright impossible, that writers Nick Bakay and Kevin James himself realized when they were writing this film that the broad narrative elements related to an underdog protagonist would end up being inadvertently relevant in an urgent way to audiences in January 2009 but art does tend to take on unintended levels of meaning (sometimes for good, sometimes for ill) given whatever timeframe it's released in. Outside elements helped ensure that Paul Blart: Mall Cop, however inadvertently, ended up becoming more relevant to January 2009 audiences than anyone could have expected.

Of course, that's merely one theory (and a tenuously posed one at that) as to why Paul Blart: Mall Cop resonated so deeply with people. The fact that it was a better-than-average live-action family movie comedy probably didn't hurt things either. Paul Blart: Mall Cop has directing & cinematography that isn't all that memorable while the script is riddeled with weird tangents (like a recurring gag with hot sauce) that don't go anywhere. That being said, the fact that it doesn't have a mean-spirited bone in its body actually is a point in its favor, this is quite an agreeable to film to watch that manages to avoid disrupting that amiable nature with an awkward demeaning gags. Plus, Blart deviates from many grating Happy Madison protagonists in being an actually pleasant fellow to be around and much of that comes from Kevin James making for a fine lead for this motion picture. Subsequent Kevin James vehicles like the dismal Zookeeper that had James solely doing a warmed-over Paul Blart impression call into question if this guy had the chops to be a comedic movie leading man, but for this sole motion picture, he works at being an endearing protagonist who really does just wanna help his mall and his crush.

The screenplay makes some smart moves that also help the film exceed (undeniably low) expectations doesn't overstay its welcome at only 90 minutes while the plot isn't overly convoluted and actually finds some solid ways to pay off previously established gags in the third act. Admittedly, most of these compliments see Paul Blart: Mall Cop rising to competency rather than delivering something truly exceptional, but compared to Grown Ups 2 or Pixels, the competency of Paul Blart: Mall Cop practically looks like a Juzo Itami movie! Plus, Paul Blart: Mall Cop is pretty amusing overall, which sees it succeeding on its primary goal of delivering some light laughs. Also helping one to appreciate the virtues of Paul Blart: Mall Cop is the fact that we have a dismal sequel that shows the world just how bad this Kevin James vehicle could have been!
Rising to the level of decent isn't the only reason Paul Blart: Mall Cop has managed to stick around in modern-day pop culture though, no, the Paul Blart: Mall Cop memes also have a lot to do with why this 2009 comedy is still a topic of discussion in 2019. The most popular of these memes sees the distinctive DVD cover art for Paul Blart: Mall Cop, as well as its title, getting warped and rearranged to frequently humorous and even more frequently disturbing results. That's not the only way the internet has gotten amusing memes out of this film though, not even close. YouTube comedian Brock Baker created a video that sees him chanting "Paul! Paul Blart! Mall Cop!" to the tune of the opening of Bastille's Pompeii while film critic Eric Allen Hatch has used Paul Blart so many times in hysterical memes that have been posted to his Twitter feed that his Twitter profile picture contains a picture of Blart with glowing red eyes riding on his segway right next to a figure from the 2010 Apichatpong Weerasethakul film Uncle Boonmee Who Can Recall His Past Lives.

Between the real-world circumstances of 2009 that made Paul Blart an urgently relevant lead character for American moviegoers, the massive domestic box office of Paul Blart: Mall Cop and the widespread modern-day use of the character as a meme, the only constant in the life of Paul Blart: Mall Cop is that it's always going in unexpected directions. Just as Paul Blart never could have imagined he would be called upon to save the day, none of the people behind Paul Blart: Mall Cop could have predicted what kind of future laid in wait for their low-budget comedy. Maybe that's an appropriately arbitrary outcome for a comedy that also tended to go in unexpected directions in comparison to other Happy Madison comedies. Just as shocking as the fact that a Happy Madison comedy like Paul Blart: Mall Cop features no flatulence is how the films lead character has managed to score such meme-driven longevity in pop culture.
Posted by Douglas Laman (NerdInTheBasement) at 6:00 AM