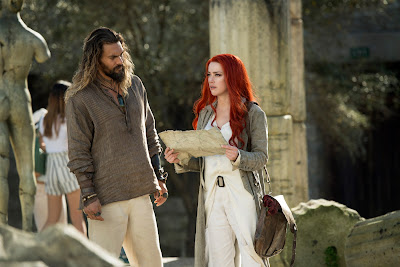 The 2019 domestic box office kicked off in fine form this weekend as the sole new wide release opened above expectations while the holdovers in the marketplace had remarkably strong holds. One of those holdovers demonstrating some box office sea legs was Aquaman, which dropped 41% this frame to add $30.7 million to its massive domestic haul that now stands at $259.7 million.  This will become the 25th superhero movie to crack $300 million domestically in no time and also seems to be on track to handily surpass $1 billion.

The first weekend of January has been the go-to place to release a horror/thriller movie for well over a decade now (Hostel cemented it as the place to be back in January 2005) and Escape Room continued to show what a great slot it can be to launch scarier cinema. Opening to $18 million, that bow surpasses the opening weekends of recent early January horror fare like The Bye Bye Man, The Forest and The Woman In Black 2: The Angel of Death and already doubles the movies $9 million budget. Memorable marketing materials and a smartly chosen release date that made it the first big horror title in nearly three months, Escape Room seemed to be poised for sleeper hit status and that's just what happened.

Having the second biggest weekend-to-weekend drop in the top ten was, surprisingly, Mary Poppins Returns, which fell 44% this weekend for a third-weekend gross of $15.7 million for a $138.7 million domestic gross to date. That's a bigger first weekend of January drop than the ones seen by comparable titles like Into The Woods but at least the film is still set for a solid $170-180 million final domestic total.

Spider-Man: Into The Spider-Verse grossed another $13 million this weekend, a 31% dip from last weekend, a better fourth-weekend hold than Alvin and the Chipmunks at the same point. With $133.8 million accumulated domestically so far, there's a chance this one could still surpass Hotel Transylvania 2 to become the biggest Sony Pictures Animation film ever at the domestic box office. Also holding well this weekend was Bumblebee, which dropped 39% this frame to gross another $12.7 million for a $97.1 million domestic gross. Will this one end up surpassing the $130.1 million domestic gross of Transformers: The Last Knight? Hmmmm, still hard to say. The Mule kept on chugging along with a fantastic 26% fourth-weekend decline this frame. Grossing another $9 million, The Mule has now grossed $81 million and is set to have a final domestic haul north of $100 million, making it only the sixth Clint Eastwood directorial effort to clear that threshold.

All the adult dramas like The Mule held really well this frame, which was good news for distributor Annapurna, as the trio of releases they currently have in the marketplace (all of them adult-skewing dramas) continued to do solid business. Once again, the biggest of these three Annapurna movies was Vice, which dipped just 25% to gross another $5.8 million, a great hold for a movie that's been so divisive in word-of-mouth. This Adam McKay directorial effort has now grossed $29 million domestically and should be able to get past $50 million domestically if it can score some high-profile Oscar nods. Second Act dipped only 33% to gross another $4.9 million for a domestic cume of $32.9 million. Continuing to save some face after its severe fifth-weekend drop, Ralph Breaks The Internet dipped only 30% this weekend to gross another $4.6 million for a domestic gross of $187.1 million. It's gonna need to have similarly strong dips over at least the next two weekends, but if it can do that, Ralph should be able to crack $200 million domestically. Rounding out the top ten was Holmes and Watson, which fell 54% to gross another $3.4 million for a domestic gross of just $28.4 million. After 13 days of release, the film has still made less than the $30.9 million opening weekend of Step Brothers.

Though it fell out of wide release this weekend for the first time since its limited release opening weekend, Green Book dipped just 3% this frame to gross another $1.8 million, giving it a current domestic total of $35.2 million. The word-of-mouth on this title is clearly outstanding and it'll be interesting to see what kind of business it does if it manages to score a bunch of high-profile Oscar nods. Meanwhile, On The Basis of Sex held exceptionally well in its second weekend as it expanded into 112 locations and grossed $1.6 million for a per-theater average of $14,920 and a current domestic total of $3.7 million. One of the few wide release holdovers that had a severe drop this weekend was The Grinch, which, thanks to Christmas now being in the past, fell 72% to gross another $1.1 million for a still massive domestic gross of $269.6 million.

Creed II fell 38% this frame, allowing it to add $973,111 to its domestic haul that now stands at $114.3 million. Still in wide release in its eighth weekend of release, Instant Family dipped just 25% this weekend, grossing another $710,000 in the process for a domestic total to date of $66.2 million. Another one of the few holdovers that saw a massive decline from last weekend was Welcome To Marwen, which plummetted 70% for a third-weekend gross of $673,000 and a domestic total of only $10.3 million. Holding far better this weekend was Destroyer, which took in another $110,000 from 6 locations this weekend for a per-theater average of $18,000, about even with its opening weekend per-theater average, which bodes well for its prospects in the weeks to come. Destroyer has now grossed $259,776 domestically. Also in its second weekend of limited release this frame was Stan & Ollie. which grossed $96,173 from 8 locations for a per-theater average of $12,022 and a domestic total of $243,159. Interestingly, Cold War improved on its per-theater average from last weekend despite adding locations, a good sign for the kind of word-of-mouth its generating. Grossing $93,000 from 6 locations this weekend for a per-theater average of $15,500, Cold War has now grossed $274,355 domestically.

The top 12 movies this weekend grossed $122.7 million, which is only the tenth biggest first weekend of any given year and down 19% from this same weekend last year when Jumanji: Welcome To The Jungle topped the box office for the first time ever.
Posted by Douglas Laman (NerdInTheBasement) at 10:41 AM