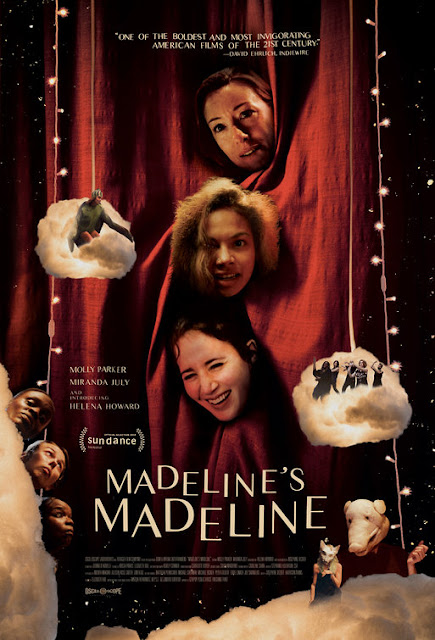 SPOILERS FOR MADELINE'S MADELINE FOLLOW
In a Performances In Historical Context class I took last Fall, we learned about a form of theater storytelling known as Immersive Theater. Emerging in the 21st century, this format of theater broke away from traditional norms of stage performance to rely heavily on audience participation, allowing for the creation of a one-on-one experience between audience members and performers, while such shows also tend to incorporate social elements into the proceedings and take advantage of whatever environment the performance takes place in. Theater groups like Punchdrunk and Third Rail are probably the most famous examples of this format of theater storytelling that ensures that no two performances of any given show will be quite the same.


Much of Madeline's Madeline seems like it's taking more than a page from the aesthetic of Immersive Theater as a way of plunging the viewer into the mindset of its lead character, Madeline (Helena Howard). Madeline has begun to warm up to and work with a theater troupe led by Evangeline (Molly Parker) and among this gaggle of performers and especially with Evangeline she begins to feel like she might have an outlet to express all of her internal frustrations. Much of this internal turmoil comes from Madeline's abusive mother Regina (Miranda July), who keeps strict and physically abusive control over Madeline. Regina ensures that all of Madeline's personal feelings are all bottled up inside, there's nowhere Madeline can express herself until she begins to learn under the direction of Evangeline.

This story about a young woman learning how to use art to convey her own personal struggles is told through frequently avant-garde sensibilities that are quickly established through an early scene showing Madeline doing on a dead-on impression of a cat for a prolonged period of time. The unorthodox touches don't end there, far from it, and while I'm sure they'll put off some audiences, I for one was totally entranced by how Madeline's Madeline's explores its lead characters journey through such unusual means. As someone who loves and works in the world of theater performance, I know firsthand how absurd it can be, why, warm-up exercises alone, divorced from any greater context, would look like some kind of cult ritual to outsider viewers.

Keeping that in mind, it feels like a brilliant move for writer/director Josephine Decker to use similarly heightened dream-like elements to convey Madeline's experiences with discovering this artistic outlet for her own personal angst. Seeing a bizarre image of Madeline as a turtle-like being on a beach, for instance, conveys in a distinct fashion just how deeply Madeline is getting into the exercise of imagining herself as an animal (that's also why she was acting like a cat at the start of the story). Surrealism is something Madeline's Madeline does quite well and there's plenty of it throughout the movie, though starkly realized reality, like Regina catching Madeline watching an adult film with two dudes, is captured in a similarly effective way.

The contrast between those grounded sequences set at Madeline's home and the theater scenes that tend to have more heightened elements helpfully convey why our titular protagonist would find such salvation in the company of Evangeline and the other performers. Perhaps the best example of how Madeline's Madeline uses surrealist elements to explore its lead character comes in an outstandingly realized climax that see's a spurred Madeline, once again seeing how she's being used by a mother figure in her life, taking control of an immersive theater experience to send both Evangeline and the viewer on an unpredictable that intentionally disorients the senses. For so long, Madeline has been at the mercy of others, but now she's taking autonomy of this performance, and by proxy, her own life as well.

So much of the last five minutes of this movie that's solely dedicated to this immersive theatrical performance had me spellbound with its visual inventiveness and there are tons of other similarly powerful images and scenes throughout Madeline's Madeline that get an impressive amount of power out of contrasting everyday reality with more surreal camerawork and editing. A staunch commitment to this unusual artistic endeavor can especially be seen in the gung-ho performances from the cast, particularly an impressive lead turn from Helena Howard, who makes her characters tormented spirit palpable no matter how detached from reality Madeline's Madeline's visuals become. If actual Immersive Theater is anywhere near as exceptional as Madeline's Madeline, then I should probably try to see some of it in person!
Posted by Douglas Laman (NerdInTheBasement) at 1:39 PM