Regina Hall Shines In Support the Girls, A Charming & Heartfelt Ode To The Underappreciated 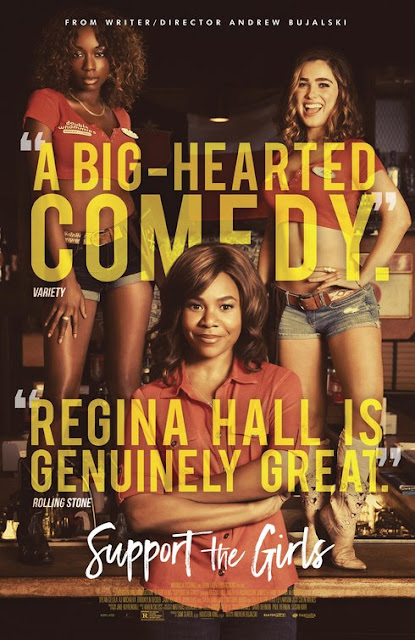 If you read Barack Obama's list concerning his 15 favorite movies of 2018, you might have understandably wondered what Support the Girls was. Considering it got only the briefest of theatrical releases back in August, it's likely the film flew under many people's radars, though the endorsement of a former President of the United States should boost its profile nicely. Though I'm nowhere near as influential as Mr. Obama, allow me to reaffirm that Support the Girls is indeed something special and should be getting even more attention. This newest film from writer/director Andrew Bujalski is a humorous and heartfelt feature about people just trying to help other people and make it through another day.


The main character of Support The Girls is Lisa Conroy (Regina Hall), the manager of a Hooter's-esque eatery known as Double Whammies. This story concerns primarily a single day in her life (there's a brief time jump for the ending scene) as she tries her best to welcome in some new employees, help out any of her co-workers and raise some money through a car wash. Lisa is the kind of person who puts everyone else first, she's selflessness personified, but the world she inhabits is far from similarly impeccable. She's gotta deal with all kinds of problems like rowdy customers, a troubled marriage, an irritating boss and so much more during the course of the eventful day that makes up the runtime of Support The Girls.

Something that doesn't get touched on much in American cinema are the day-to-day lives of people who work part-time jobs like waiters, cashiers and other gigs. Typically, they're only seen in a A Star Is Born/La La Land situation when it's to show a character having dreams of bigger aspirations before they go on a journey that involves fame and fortune. There's nothing wrong with those movies or those type of stories but that's also not the reality of most people who have to work multiple jobs just to keep a roof over their hood. Support the Girls is one of those rare movies that dare to focus on the lives of normal people living paycheck-to-paycheck working in part-time jobs and the way the movie so frequently echoes reality makes it clear that Andrew Bujalski is looking to do a humanizing portrait of the workers at Double Whammies rather than turn them into shallow caricatures.

Like writer/director Bujalski, our lead character, Lisa Conroy, see's the assorted waiters and staff members at Double Whammies, even a cook who aided a burglar to some degree or another, as human beings deserving of being treated with empathy, a view that her manager and other people running similar eateries clearly do not share. The character is portrayed by Regina Hall, a performer who has absolutely astounded me with her versatility in recent months. Between July 2017 and October 2018, Hall has appeared in Girls Trip, Support The Girls and The Hate U Give and in each of them, she brings a totally new performance to the table that always registers as both complex and recognizably human. What an effortlessly malleable actor!

For Support the Girls, Hall delivers what may be her best work yet as a performer as she adopts an authentic Southern twang for a character who's able to convey being kindhearted while managing to be similarly believable as someone who can get things done as the manager of a busy restaurant. It's just as heartwarming to see Hall portray Lisa Conroy being a compassionate companion for a crestfallen waiter as it is moving to see her depict Conroy in a moment of vulnerability. It's a rich performance that embraces the complexities of an ordinary human being rather than running from reality, a trait shared in exceptional supporting turns by Shayna McHayle and Haley Lu Richardson.

McHayle and Richardson's characters are one of a number vibrantly realized characters (which include regular customer Bobo played delightfully by Lea DeLaria) scattered throughout Support the Girls that make the down-to-Earth universe of the film so much fun to watch. If that's where much of the entertainment emerges from, then the effective heartwarming nature of Support the Girls comes from how both the story and characters are constantly reaffirming the value of treating both themselves and the women around them as human beings. The unique nature of Support the Girls is impressive all on its own but even beyond that aspect of the production, the movie is so entertaining & sweet, not to mention containing an impressive lead performance from Regina Hall, that it's easy to see why Barack Obama was singing its praises.
Posted by Douglas Laman (NerdInTheBasement) at 11:07 AM