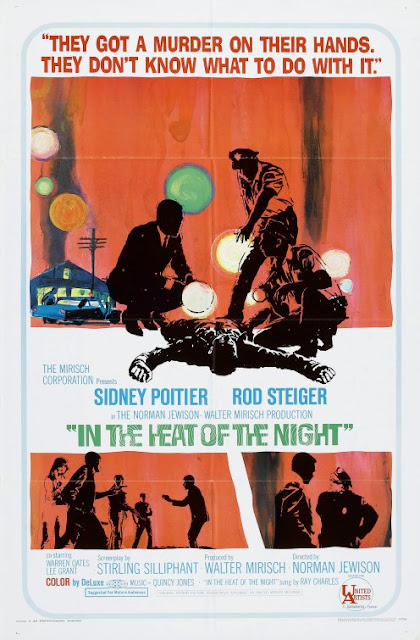 There's plenty to unpack in the 1967 Best Picture Oscar winner In the Heat of the Night, including the fact that this is just an all-around excellent motion picture but something that stood out to me was how a number of crucial aspects in regards to how the feature treats the topic of American racial tensions between black and white citizens stand out as being completely different, in a good way, from how many modern high-profile American films treat the same subject. For one thing, In the Heat of the Night is set in what was then the modern-day world, it doesn't try to set its story in the past as a way of portraying racism as only a thing that happened in yesteryear America.

For another, it's told through the lens of a black protagonist instead of the white savior approach that many modern American movies covering similar themes (albeit, the stories between individual movies are vastly different) like Green Book or The Help choose to take. It also doesn't grind its story to a halt to reassure white audience members that there are good white people that exist in this world, bigotry exhibited by white individuals towards Virgil Tibbs (Sidney Poitier), our lead character, is primarily used as a method of exploring his perspective. Sometimes with older films you have to grit your teeth and cringe through outdated material, but In the Heat of the Night actually teaches modern films dealing with American racial turmoil more than a thing or two on what type of storytelling mechanics can be used to make narratives that explore this matter in a successful fashion.

In the Heat of the Night explores the experiences of being a Black man in Sparta, Mississippi in the mid-1960s through the prism of a mystery thriller. A wealthy man who was set to bring numerous jobs to this Southern town has been mysteriously murdered and Virgil Tibbs, who's just passing through this unfamiliar town, is the prime suspect for the crime. Tibbs is able to eventually prove his innocence and decides to further investigate this mystery. Though he's got more wits and brainpower than anyone else in this town, Virgil's mere presence has gotten local townspeople, including local police chief Gillespie (Rod Steiger), in a racist fury.

Much like the modern-day True Detective, the mystery at the heart of In the Heat of the Night is less of a whodunit fixated on setting up clues for the audience and characters to follow and more of a way to explore the lead characters and their turmoil. Also like True Detective, In the Heat of the Night serves as a showcase for the acting talents of its leading man, with this Norman Jewison directorial effort allowing Sidney Poiter to really shine in the role of Virgil Tibbs, a man who constantly has to be on his toes just when walking down the street, let alone when trying to solve a murder, in a town that needs his wits to solve this crime just as much its townsfolk despise him.

The dichotomy there is utterly fascinating on a conceptual level and Poiter uses such a dichotomy as a fascinating base for his performance. Poiter's work as Tibbs gives the character a composed demeanor, one that conveys a sense of confidence in his skills in such subtle ways, but the character isn't just a stoic figure lurking in the background, the character of Tibbs is also one who fights back against disrespect in ways both subtle and overt. One of these overt moments comes in the iconic "They call me Mr. Tibbs!" line, which may have been parodied to death by now but still registers as a powerful piece of dialogue in the stand-alone context of this film thanks to Poiter's masterful delivery of the line that sees the actor commanding so much authority and power in without raising his voice above the level of reasonably stern.

Poiter's work here maintains the composed nature of Virgil Tibbs while also portraying the character as one who will stand defiantly in the face of oppression, whether it's through lines like "They call me Mr. Tibbs!" or cleverly executed moments where we see Tibbs manipulate local white townspeople to do just what he wants. It's an impressively realized performance that, like Humphery Bogart in Casablanca or Katherine Hepburn in Bringing Up Baby, serves as a shining example of why a legendary movie performer earned such a celebrated status as an actor. Though his work isn't as good as Poiter's (though that's a high bar to clear), Rod Steiger also delivers strong work here as his decision to portray Gillespie as not a buffoon but rather a terrifying malicious figure works extremely well.

Legendary cinematic figures can be found throughout In the Heat of the Night even beyond just the cast list. Three years prior to his directorial debut, Hal Ashby served as the editor of In the Heat of the Night and he does some great work here, the editing shines when accentuating certain moments of levity (like Gillespie's defiant refusal to accompany Tibbs on an investigation being abruptly interrupted by a buzzsaw) but truly excels when it comes to more intense sequences, such as a scene showing Tibbs being chased by local racist hooligans. In this sequence, every cut to a new shot feels like it has a purpose, this car chase that eventually turns into a foot chase is rendered visually fascinating thanks to the brilliant sense of timing in Ashby's exceptional editing.

The direction from Norman Jewison is similarly top-shelf, particularly in how well he directs his actors and the subtly creative camerawork and blocking he employs throughout. If we're praising crew members of In the Heat of the Night, special compliments must be given to the screenplay by Stirling Silliphant (which is based on a book by John Ball). The script here is thoroughly exceptional from the memorable dialogue to the well-realized characters to a tense climax that skilfully goes from an intimate conversation between Tibbs and a backdoor abortionist (played by Beah Richards in a great one-scene performance) to a larger-scale confrontation between Tibbs and a mob without missing a beat. Such a conceptually tricky finale is the sort of element In the Heat of the Night pulls off without breaking a sweat, one of the numerous impressive accomplishments that this movie manages to achieve so effortlessly.
Posted by Douglas Laman (NerdInTheBasement) at 11:39 AM