In Laman's Terms: Sometimes, There Aren't Two Sides To An Issue 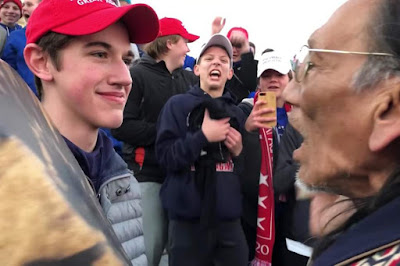 EDITED TO ADD: Just before this article was published, I learned that a Louisville, Kentucky PR firm called RunSwitch PR has been instrumental in mounting a comeback narrative for these Covington Catholic school students.

On January 19, 2019, a group of Covington Catholic School students, adorned in Make America Great Again hats and attending an anti-abortion March For Life ceremony, harassed 88-year-old Vietnam Veteran Nathan Phillips with racist chants and behavior while teenager Nick Sandmann stared down Phillips. Yes, there was a rival group (also filled with cruel people) also at the event causing trouble between themselves and the Covington Catholic School students and yes, Phillips approached the students first in an attempt to de-escalate what was already a tumultuous situation. None of that changes the fact that these students bellowed "BUILD A WALL!!" at a peaceful individual simply because of the color of his skin, a racist practice consistent with actions like blackface that are considered alright at their school.


Of course, in the days since, there's already been a predictable turnaround in trying to frame the teenagers as poor victims as outlets like CNN put out stories from the perspective of white reporters trying to posit the story not as a demonstration of full-blown racism but as an example of people rushing to judge a group of teenage boys. A great essay by Laura Wagner published on The Concourse last night compiles many of these apologetic new pieces that try act like there's more going on in a thoroughly cut-and-dry demonstration of bigotry. The President of the United States, and also the man who falsely claimed the innocent Central Park Five were guilty in October 2016, Donald Trump, has even taken to his garbage fire Twitter account to twice tweet out support for the boys and even inviting them to the White House, not once offering any support to Nathan Phillips. This tactic of twisting racist acts into ones where white people are actually the victims is not a new one for Trump, who tried to play off the Charlottesville Nazi marches as an issue "on both sides" of the political spectrum and this practice of trying to brush under the rug any overt public instance of modern-day racism is similarly far from new for white people in general.

There's a tendency in predominately white individuals, both in America and abroad, to frame any modern-day instance of overt racism as not despicable acts of aggression against oppressed populations but merely nuanced scenarios where, at best, both sides are at fault and more frequently, the side white people are on is actually the one getting oppressed. It's a way of approaching racist interaction as if the matter of people of color getting harassed is the same type of complicated issue with many different answers as, say, deciding what your favorite Star Trek TV show is. This is primarily because that's a way easier way to digest clear instances of racism than having to deal with the fact that racism is still rampant in our world, that it's not something that vanished in the 1960s but rather persists in ways both big and small to this very day. The same white individuals in the modern era who would likely say, without hesitation, that segregated water fountains in the 1960s were bad, no question, can also be the same people whose first reaction upon hearing news of an unarmed black person being shot by a white police officer is to figure out ways that the unarmed black person could have been at fault in the scenario. Confronting racism in the modern era where you might have to grapple with your own part in perpetrating said racism, even on an unknowing level, is far more daunting than just viewing all instances of racism through a prism that shifts blame to both sides or even just to the side of marginalized communities.

But examples of societally ingrained racist behavior were bad then just as racist behavior in the modern age is bad now, pure and simple. Such a concept eludes people as well as the general mindset of American media institutions that bend over backward to excuse racist behavior and the people who perpetrate it, that's how Nicholas Sandmann gets to have a cozy interview with The Today Show while Nathan Phillips and his perspective are ignored by outlets like The Today Show. Putting Sandmann on a pedestal while outright ignoring the man he harassed is another side effect of constantly defaulting to believing acts of racism are a problem with both parties instead of just the people being racist. Such an approach typically involves rampant attempts to dehumanize people of color who have experienced race-based hardship or violence. Just think about how often one would get reminded via news pieces and social media posts about how Trayvon Martin was"no angel", for example.

This constant method of dehumanizing people of color while also bending over backwards to paint racist white people as woebegotten martyr figures is why the oft-repeated notion that we must treat the Covington Catholic students with only civility rings hollow to me. The idea of extending humanity to all people is a noble one in theory and certainly, any death threats sent to these teenagers is a bridge way too far, of course. But when applied to the specific circumstances of understanding public displays of racist behavior, trying to act like there's greater nuance behind these kinds of individuals who commit said racist behavior is just an awful idea from every angle. When people see racist behavior, they should speak out and call other people out on it, not cower away in the name of so-called "civility" that only benefits the more powerful populations in America society. By always defaulting to understanding the humanity of racist individuals like the Covington Catholic school boys, the humanity and hardship of the people of color they harass and marginalize gets lost in the process. When one tries to paint nuanced portraits for despicable individuals, people think they're engaging in so-called civil behavior but there's nothing civil about minimizing and even outright erasing the experiences of individuals like Nathan Phillips.

These behaviors that have informed a new media narrative, one endorsed by the President of the United States (who, lest we forget, was charged with having a racial bias against renting to apartments to black tenants in the 1970s), that Nathan Phillips himself challenged in a statement yesterday where he refused a call by the students to just break bread and make peace. In his own words, he saw the scenario as "...destruction from a terrible storm tearing apart the fabric of my America...I saw racism and bigotry." His words and perspective serve as a proper demonstration of actual civility as well as reinforcing that our empathy should lie with men like Phillips and not with racist bullies like Nick Sandmann and his classmates. The thoughts of Nathan Phillips should be defining this story, not predominately white reporters trying to minimize the racist actions of students like Nick Sandmann who made their intentions towards protestors of color clear just by wearing those wretched Make America Great Again hats. Nuance is a helpful vital in many situations but not when it comes to instances of racist behavior, that is the time to stand up and speak out against oppressors of marginalized groups.

Martin Luther King Jr. put it best when it comes to the kind of people trying to create excuses for Nick Sandmann and the other Covington Catholic students in a passage from Letter from a Birmingham Jail:

"I must make two honest confessions to you, my Christian and Jewish brothers. First, I must confess that over the past few years I have been gravely disappointed with the white moderate. I have almost reached the regrettable conclusion that the Negro's great stumbling block in his stride toward freedom is not the White Citizen's Counciler or the Ku Klux Klanner, but the white moderate, who is more devoted to "order" than to justice; who prefers a negative peace which is the absence of tension to a positive peace which is the presence of justice; who constantly says: "I agree with you in the goal you seek, but I cannot agree with your methods of direct action"; who paternalistically believes he can set the timetable for another man's freedom; who lives by a mythical concept of time and who constantly advises the Negro to wait for a "more convenient season." Shallow understanding from people of good will is more frustrating than absolute misunderstanding from people of ill will. Lukewarm acceptance is much more bewildering than outright rejection."
Posted by Douglas Laman (NerdInTheBasement) at 6:55 AM