Serenity Provides Tons of Entertainment, But None of It Is Intentional 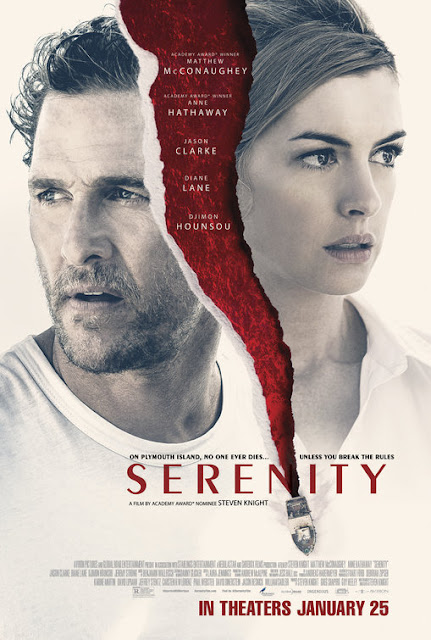 What madness hath thou wrought.

I cannot believe that Serenity thought that its plot executed in this manner was actually going to work as an effective drama. This new Steven Knight directorial effort wants to be the landmark neo-noir movie for a whole new generation, but instead of evoking The Maltese Falcon, Serenity just channels memories of something like Little Boy in being off-the-rails storytelling that's far too convinced it's something profound. As a neo-noir thriller, it constantly comes up short but as an unintentional comedy, the movie actually works more often than not. Seeing so many big-name talented actors working taking this schlocky material so seriously is an entertaining sight. It's an experience akin to watching Renaissance painters working their asses off trying to make the most emotionally stirring piece of finger paint art.

Baker Dill (Matthew McConaughey) is a reclusive fisherman living on an isolated fishing island who has become obsessed with catching a fish he's named Justice. Like many noir protagonists, Baker Dill is a morally flawed soul, though whereas the likes of Sam Spade were more nuanced in their morally complex nature, here we know Baker Dill is a jerk because, in the first ten minutes of Serenity, he threatens to cut a tourist with a knife and tells his first mate Duke (Djimon Hounsou) that the passing of Duke's wife is why they haven't been able to catch Justice. Baker Dill's behavior in these opening sequences is indicative of how all the characters of Serenity are archly drawn as clear-cut good guys and bad guys, a feature that goes directly against how noir movies typical noir movies involve characters who can't be easily put into boxes like that.

Anywho, walking back into Baker Dill's life one day is Karen Zariakas (Anne Hathaway), our femme fatale for the piece. She's come back into Baker Dill's life so that she can ask him for a favor: could he take her abusive husband, Frank (Jason Clarke), out to the ocean and feed him to the sharks in exchange for $10 million? Such a quandary challenges Baker Dill considerably and the rest of the plot concerns him trying to figure out whether or not to follow Karen's wishes as well as coming to terms with a big plot twist that takes a movie from just being simply peculiarly off to being totally and completely off-the-rail madness.

The aforementioned defect of the characters being so broadly drawn is a key part of why Serenity is hard to seriously as a straightforward drama. Take Karen, for example, as a character you could invest in or even just be intrigued by, she doesn't work, all she's got to her name is an aura of mystery and a hokey backstory connecting her and Baker as teenage lovers. She's better off than her husband Frank though, who has all the subtlety of a LazyTown villain and less menace than those antagonists. Clarke is just stuck blabbering around all kinds of laughably odious dialogue in a similarly comical thick New England accent. Serenity wants to be a thoughtful contemplation of good & evil, the motivation of man and other high-concept ideas but that goes completely against the performances & characters who are more suited for a movie that would be featured on Mystery Science Theater 3000 (come to think of it, Mitchell does seem like an inspiration for Clarke's performance here).

Steven Knight's screenplay is as short on thematic depth as the performances, the specific storyline that ends up getting rather existential for Baker Dill just doesn't stimulate the mind all that much and feels derivative of other movies. It's also terrible on a story structure level and, worse still, the dialogue in here is frequently terrible, the first act is full of characters speaking only in shallow exclamations providing clumsy exposition while the dialogue in subsequent portions of the story have a remarkable ability of constantly eliciting the complete opposite response they were supposed to garner. Comical lines fall flat, remarks meant to be sexy are hilarious (anything Anne Hathaway says in her big sensual scene with McConaughey is a hoot) and pieces of dialogue related to explaining the various shocking twists in the story confuse more often than they enlighten.

Put simply, Serenity is a broken movie. But like I said earlier, it does work on one front and that's as a comically inept movie. For aficionados of trash cinema, watching Serenity is like dropping into a goldmine, chock full of hammy moments destined to become widely shared GIF's and lines of dialogue that will be etched ironically on T-shirts. I found myself constantly going "WHAT??" and "ARE YOU KIDDING ME??" throughout its runtime, it's such a bizarre creation that gets only more and more peculiar as it goes along. As a serious neo-noir, Serenity is a failure, but as a piece of unintentional comedy you could watch on Netflix and laugh at with friends, it'll provide tons of entertainment and that's certainly saying something considering how many terrible movies can be outright torture to sit through on any level (oh, hello Welcome to Marwen and Fantastic Beasts: The Crimes of Grindelwald).

Wanna know more about my thoughts on the twists of Serenity? Some brief spoiler-filled thoughts can be found here.
Posted by Douglas Laman (NerdInTheBasement) at 8:22 PM