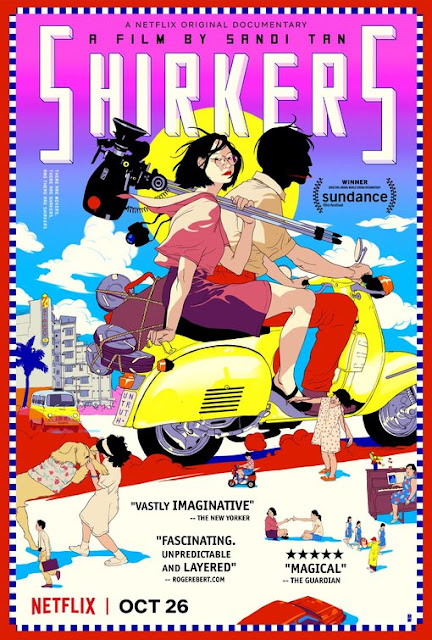 I've mentioned before how Netflix really did just crush it in terms of the quality of their original movie output in the last three months of 2018 and easily rising towards the top of that stellar crop of movies (which really is quite the feat!) is the documentary Shirkers. Directed by Sandi Tan, the feature is named after a motion picture she made with her friends and a film teacher mentor, Georges Cardona, in Singapore in the early 1990s. She poured her heart and soul into this film, all of her passion for cinema drove her to complete something that hadn't really been seen before in the film industry of her home country of Singapore.


Once filming was completed, tragedy struck as Cardona made off with all of the footage and was never heard from Sandi Tan or her two friends ever again. All of that hard work for nothing. The documentary Shirkers sheds light on how Sandi Tan came to become so close to both movies and Cardona, the process of making Shirkers and the bizarre journey to try and reclaim the footage that she lost all those years ago. Like fellow 2018 documentary gems Three Identical Strangers and Minding the Gap, Shirkers is a documentary whose various twists and turns are so riveting and unexpected you can't believe that this is actually real life and not a fictitious script. Sometimes life is a lot more like a movie than the movies we set out to make!

Early scenes showing Sandi Tan's childhood show her to be, like many devotees of cinema, a bit of an outcast in both her family and in Singapore society in general. There are so many strict rules to adhere to in her world, it's no wonder that she and her two best friends, Jasmine Ng and Sophie Siddique, gravitated towards more anarchic creative outlets to express themselves. These fascinating sequences explaining just what informed Sandi Tan and who she is are paired up with well-chosen visual aids like magazines the trio wrote for and rebellion-inspired drawings that Sandi Tan inspired her young relatives to draw that show how a sense of defiance always manifested in a visual form in her life.

These formative sequences do a great job filling out what informed Sandi Tan and why she would be so enamored with Georges Cardona, a man who actually embraced the very rebellious tendencies so many others wished to squash out. One of these tendencies was making an unconventional independent feature unlike any other made in Singapore up to that point and it's fascinating to watch behind-the-scenes footage of them all making this movie with what little resources they had as well as hear stories from these main players as well as other crew members about what a rocky production this was on. Such stories allow for one of the most unexpected but also one of the most intriguing parts of the documentary Shirkers which concerns how Tan uses this documentary as a way to reflect on her behavior towards her friends in this period of her life.

Though with the benefit of hindsight she can see now the extremely puzzling behavior of Cardona during the making of this film, which included putting together an elaborate flight sequence that wasn't in her script, but at the time, she ignored that as well as some of the wishes of her two closest friends. This documentary allows for a wistful look into a movie that never managed to exist as well as regrets of Sandi Tan's past that very much existed.  So much of the past, primarily the film she lost, haunts Sandi Tan and Shirkers allows her a chance to both explore that past and comes to term with it and both missions are fascinating to watch unfold, particularly when it comes to how her exploration of answers as to what Cardona did with her footage takes her to other people that factored into Cardona's life.

You really won't believe what kind of tales these people recount from their experiences with Cardona, I was totally transfixed by their tales that carry so much aching melancholy to them in terms of just how far-reaching and impactful this man's selfish actions were. Also transfixing are accounts from both local Singapore film critics and Tan herself how the unique vision for the movie Shirkers ended up being a precursor to late 1990s and early 2000's indie darlings like Rushmore or Ghost World. Getting these interviews to add a sense of context for how just how ahead of its time this film was allows one to appreciate how Sandi Tan had used her art to tap into something that "your kids are gonna love" much like Marty McFly did when playing Johnny B. Goode at a 1950's prom in Back to the Future. It's a tragedy the original movie did not get to be properly realized in the 1990s but at least it inspired Shirkers, which is yet another top-notch documentary from 2018.
Posted by Douglas Laman (NerdInTheBasement) at 10:27 AM