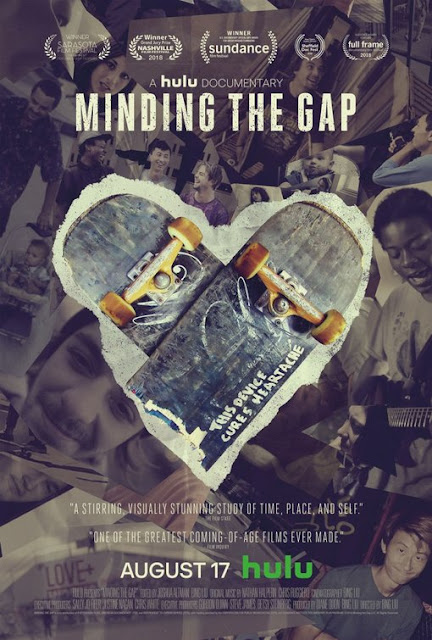 When director Bing Liu set out to make Minding the Gap, his primary goal seemed to be to look at the abusive childhoods that he and his two best friends had endured and how that abusive behavior had impacted their modern-day lives. It's hard to imagine that director Bing Liu ever thought, in the process of filming the everyday lives of his childhood pals, hed end up with something that has such precise build-up and tragic pay-off's that it feels like it could belong in a traditional narrative feature. In the confines of a film, these turn of events would be held back by the fact that they are, after all, fictional, just performers reading a script, whereas Minding the Gap is capturing reality itself, complete with raw revelations about the complicated lives of Bing's best friends.


The basic premise of Minding the Gap concerns three childhood friends, Bing, the film's director and the son of a mother who was physically abused, Zack, a man who suffered abuse from his dad and is now grappling with the responsibilities of being a father himself, and Kiere, an upbeat and hard-working individual trying like hell to get out of Rockford, Illinois. That American city is noted, via voice-over from news reports, to have a high level of domestic abuse and Bing, Zack and Kiere found an outlet of escape from that abuse that infiltrated their homes through skateboarding. The trio of youngsters could discover some sort of release from reality through doing skateboard tricks together, in the process forming unity that was frequently missing from their home lives.

At times, his documentary is almost like a form of therapy for them as it allows this trio of men to confront the hardships that were tragically formative to their childhood. They may be grown, but the pain from their youth still lingers in their minds, as shown by a scene where Bing and his brother return to their childhood home and Bing's brother proceeds to walk around to different locations of the house and point out various spots where he suffered abuse from his father. Though he tries to talk about it in a casual manner, Bing's brother is clearly still shaken up in describing the torment he's experienced and his stories are extremely haunting to hear. Though their childhood home may be empty now, the memories of the abuse that transpired here are as resonant as ever.

Minding the Gap does not hold back in depicting the aftereffects of gruesome daily abuse and part of the reason the film's depiction of this psychological torment is so effective is that it's able to so effectively communicate how abuse can manifest in different forms. Bing Liu compiles interviews with a variety of people who have experienced different kinds of abuse, whether it's from parents or a romantic partner, no two tales of abusive experiences are the same and that also goes for how much variety there is in depicting the psychological after-effects on people who have endured abusive scenarios. This is executed in a masterfully subtle manner, the interview segments are so riveting on a surface level that one doesn't even notice how Liu is conveying that abuse is not a one-size-fits-all scenario, it's something that can take on many different forms.

The assorted interview segments do a great job of rounding out the people in Bing's life as complex human beings, particularly his two best friends who go in polar opposite directions throughout the course of the feature. Kiere, on the one hand, is someone who always has a laugh on the tip of his tongue and is dedicated to saving every penny he can for the purpose of moving out on his own. Though parts of his past may be grim he's a man hopefully looking to the future. There's a sense of dauntless optimism to this man that's immensely endearing while his more vulnerable moments are similarly captivating. That vulnerability informs the best scene of Minding the Gap, which depicts a weary Kiere realizing that, because it's Monday, he doesn't have to go back into work later that day and proceeds to break down in a tired expression joy.

If Kiere is someone who has confronted his past while gazing to the future, Zack is someone who has difficulty opening up about his experiences in his abusive childhood and just can't handle what the future, specifically a child and all the responsibilities therein, bring to his life. His story ends up being a tragic one as both we and Bing come to realize just how much like his father Zack is becoming. Kiera and Zack are two contrasting portraits of how people shape their future by their ability (or lack thereof) to engage in the difficult task of confronting the past. Following these two characters, as well as exploring Bing's own home life, makes for a phenomenal cinematic experience. Minding the Gap brilliantly uses the prism of documentary filmmaking to allow viewers the chance a raw look inside the complex psyches of Bing and his childhood friends.
Posted by Douglas Laman (NerdInTheBasement) at 1:46 PM