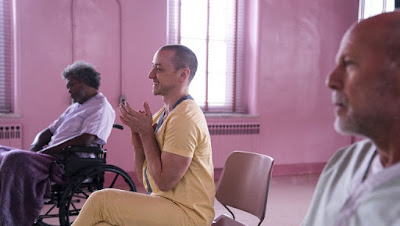 Well, the last weekend of January 2019 was an underwhelming one that was topped by Glass, which saw a 52% drop from last weekend for a second-weekend gross of $19 million. That's a much bigger second-drop than the 36% dip of Split, but given how frontloaded Glass was last weekend, as well as the potentially divisive nature of its story, this is a better than expected hold, being noticeably better than the 67% plunge of The Village. After ten days of release, Glass now has a $73.5 million domestic haul. Even though it, like most releases, will take a hit next weekend thanks to Super Bowl Sunday, it does looks like this one will get past $100 million domestically, which will make it the first movie starring Bruce Willis to clear $100 million domestically since 2007's Live Free or Die Hard. It'll also be the sixth directorial effort from M. Night Shyamalan to cross $100 million domestically.

The Upside is turning into a box office force of nature as it dipped only 18% in its third weekend of release to gross another $12.2 million, which is actually a bigger third weekend gross than the first Ride Along. With a $63.1 million domestic haul to date, The Upside is looking at a final domestic haul of at least $85-90 million and will very likely end up as only the second STX Films title ever, as well as only the fourth live-action Kevin Hart vehicle, to clear $100 million domestically if it holds well throughout February. Also holding well this frame was Aquaman, which dipped only 27% in its sixth weekend of release to add $7.3 million to its massive domestic haul that now stands at $316.5 million. Aquaman is now the biggest DC Comics film ever at the worldwide box office and will soon surpass the likes of Suicide Squad and Batman v. Superman at the domestic box office to become the biggest non-Wonder Woman DC Extended Universe film ever domestically.

It was not a good weekend for any of this frame's two wide release newcomers, with family movie The Kid Who Would Be King being the biggest of the pair but still managing only $7.2 million. That's a dismal bow given that the film apparently carried a reported $50+ million budget and is the worst opening weekend ever for a movie opening in over 3,500 locations. It's also a poor showing for a live-action fantasy movie, coming in behind even the $7.7 million opening of Inkheart from ten years ago. There's really no good news to be found here, despite garnering widespread acclaim from critics and solid word-of-mouth from audiences, the newest Joe Cornish film was a full-on box office bust.

Spending its seventh weekend in the top five was Spider-Man: Into The Spider-Verse, which dipped a measly 18% to gross another $6.1 million, bringing it up to a $169 million domestic haul. Just $700,000 more and it'll dethrone Hotel Transylvania 2 for the title of biggest Sony Pictures Animation title ever at the domestic box office. Meanwhile, hot off the heels of its numerous Oscar nominations, Green Book, finally expanded into over 2,000 locations, 2,430 to be precise, and grossed $5.4 million for a per-theater average of $2,228. Those aren't exactly outstanding figures (for comparison's sake, The Shape of Water grossed $5.9 million from less locations the weekend after its Oscar nods were announced), but that's still its biggest single weekend yet and brings it up to a $49 million domestic total. A Dog's Way Home cracked the $30 million domestic mark threshold this weekend by dipping 27% from last weekend and grossing another $5.2 million for a $30.8 million domestic gross.

Star power does not automatically equal a box office hit. Just ask Serenity, the other new wide release flop of the weekend. Opening to only $4.8 million, that's the worst wide-release opening weekend gross ever for Anne Hathaway and the fifth worst wide release opening weekend for Matthew McConaughey. It also marks the second-straight box office bomb for newbie studio Aviron (they've only released four movies over the span of 17 months) and a terrible start for a movie with a $25 million budget. The advertisements for Serenity promised vague noir shenanigans and lots of McConaughey voice-over work, but had no concrete character or story details to entice audiences. Aviron didn't do much to market the film beyond in-theater promos and slapping the trailer on every movie I saw in the past month, that also didn't help. Given that it scored a D+ CinemaScore and will have to face off against the Super Bowl next weekend, Serenity will likely only make just over $10 million domestically.

Escape Room had an astonishingly small 23% dip this weekend, a clear demonstration that this horror movie is generating much better word-of-mouth among audiences than anyone could have expected. Grossing another $4.2 million, Escape Room has now grossed $47.9 million. Dragon Ball Super: Broly fell a hefty 63% from last weekend to gross $3.6 million but it's already grossed an impressive $28.9 million domestically, it could make only three cents more from here on out and it'd still be a domestic box office game-changer. Just outside the top ten, Mary Poppins Returns fell 40% for a sixth weekend gross of $3.1 million for a domestic gross of $165 million. Also in its sixth weekend this frame was Bumblebee, which fell 38% to add $2.9 million to a domestic cume that now stands at $121.3 million.

Unlike in some past years, the various movies nominated for Academy Awards this year didn't get too much of a box office boost. The Favourite was one exception to this as it scored its second-biggest single weekend gross ever, $2.5 million (a 214% increase from last weekend), at its largest theater count, 1,540, for a per-theater-average of $1,662 and a domestic gross to date of $26.1 million. Bohemian Rhapsody was another Best Picture nominee that saw a weekend-to-weekend increase this frame as it went up 7% from last weekend to add $2.4 million to its domestic gross that now stands at $205.8 million. While we're talking about the box office success of Bohemian Rhapsody, it's worth mentioning that The Atlantic published a piece two days about the films director, Bryan Singer, chronicling the experiences of men who have alleged the director of raping them as teenagers. Fair warning, the piece is full of graphic & disturbing descriptions related to sexual assault.

Moving on, On The Basis of Sex fell 46% this frame to gross another $2 million, taking it to a $21 million domestic total, making it only the seventh limited release of 2018 to crack $20 million domestically. Despite expanding back into 1,557 locations and garnering a whopping 8 Oscar nods, Vice fell 1% from last weekend to gross another $1.7 million. After five weekends of release, Vice has grossed $42 million and will likely make it just over the $50 million mark domestically. Meanwhile, The Mule became only the sixth Clint Eastwood directorial effort to crack $100 million domestically as it grossed another $1.6 million (a 49% drop from last weekend) for a current domestic total of $100.1 million. Stan & Ollie finally expanded into wide release this frame and took in $1.29 million at 725 locations for a per-theater average of $1,786. Though a slightly better wide release opening weekend than The Lady in the Van (whose release Stan & Ollie has been mimicing), that Maggie Smith headlined feature fared far better in its prior weeks of limited release than Stan & Ollie, which has now grossed only $2.2 million after five weekends of domestic play.

The top 12 movies this weekend grossed only $81.3 million, one of the lowest fourth-weekends of any given year in a good long while. This is yet another instance of lackluster new releases being the problem, as past final weekends of January had titles like Hide and Seek, Maze Runner: The Death Cure and The Grey that didn't even generate massive sums of cash but did have compelling premises to lure audiences out of their homes. Next weekend is guaranteed to be a ghost town too, though the arrival of The LEGO Movie 2 in two weeks time will begin a weekly arrival of major 2019 tentpoles that should liven up the box office to a notable degree.
Posted by Douglas Laman (NerdInTheBasement) at 10:46 AM