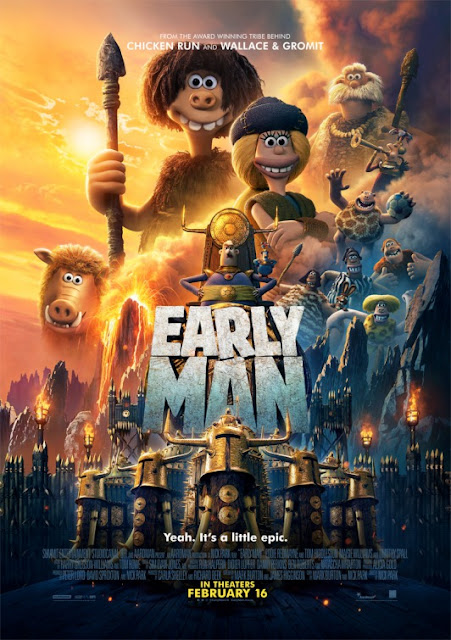 Aardman Animation (the outfit behind Wallace & Gromit and Chicken Run) have been trying to make a caveman comedy for well over a decade now. Back when they had a deal to produce films with DreamWorks Animation, one of their proposed projects was a feature called Crood Awakening that John Cleese had written the script for. Once Aardman left DreamWorks, the latter studio turned the film into The Croods while Aardman finally got around to delivering a caveman project (albeit without the involvement of John Cleese) with Early Man, which was released in the first few weeks of 2018 to underwhelming box office results.


Early Man stars Dug (Eddie Redmayne), a caveman who belongs to a tribe of simple-minded but friendly cavepeople. Their lives of hunting rabbits and enjoying one another's company is upended by the arrival of the far more advanced Bronze Age people led by the nefarious Lord Nooth (Tom Hiddleston) who plans to take the land that Dug and his people call home. Determined to keep his land, Dug challenges Nooth and his people to a game of soccer, the outcome of which will determine who gets to keep the land for themselves. The problem with this challenge is that Dug and his fellow cavemen have no idea how to play soccer so they're going to need some help from kindly Bronze Age shopkeeper Goona (Maisie Williams).

The strangest part about Early Man is how little of it takes advantage of the prehistoric setting, with much of the plot taking place in the Bronze Age environment that could easily come from any particular time period. The few times we see aspects of the production that really take advantage of the possibilities of setting a story in this ancient time period, like a gigantic toothy mallard, are easily the most fun of the entire production. Much as I hate to side with the bigger corporation like DreamWorks Animation over a smaller production company like Aardman, it is hard to forget while watching Early Man just how more creative The Croods was in figuring out fun environments and creatures for the prehistoric lead characters to encounter.

There isn't much in the way of going above and beyond expectations in Early Man, which is strange considering past Aardman movies excelled at surpassing expectations. Who knew a modern-day animated silent movie could actually be pulled off? Who knew Hugh Grant could make such a hysterical pirate? Who knew Wallace & Gromit could actually translate to longer-form narratives beautifully? By contrast, Early Man is a touch too generic, the supporting characters (like Dug's cavemen brethren) never come alive as entertaining figures, the aforementioned inability to truly utilize the prehistoric setting means the animation isn't as memorable as it could be and repeated uses of bathroom humor echo the weakest of mid-2000's DreamWorks Animation fare rather than the works of an animation studio that dropped a Kafka reference into a movie about rats getting flushed down toilets.

That being said, we are still dealing with an Aardman movie, so even though it's weaker than any of their other movies, Early Man can still be counted on for some good laughs. Some fun bits of out-of-nowhere humor (namely Dug's dad revealing his surprisingly young age) get some real mileage out of being the most unpredictable elements around while the animation, though not being as creative as it could be, is still quite charming. There's also some solid uses of celebrity voice-overs through the likes of Eddie Redmayne, Tom Hiddleston and Timothy Spall, all of whom morph their voices to fit their characters rather than just go through the motions in doing their natural voices. The best parts of Early Man tend to go beyond just satisfactory while the rest of it is at least inoffensive but sadly forgettable, especially when one considers just how exceptional past Aardman features have been!
Posted by Douglas Laman (NerdInTheBasement) at 9:34 AM