The Trailer For Paul Feig's Ghostbusters Is Here!! 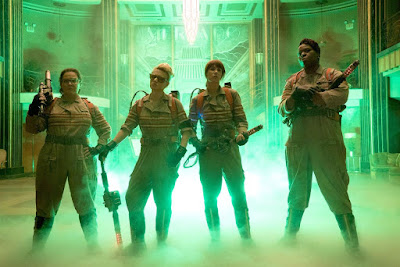 Out of all of this years crop of summer blockbusters, few carry as many question marks as this years Ghostbusters reboot. Can Paul Feig graduate to the realm of summer blockbusters with all the success of Christopher Nolan, the perfunctoryness of Collin Trevorrow or the failure of Marc Webb? Will the new group of Busters (Kristen Wiig, Melissa McCarthy, Kate McKinnon and Leslie Jones) work well as a team? Will whiny Mens Rights Activists ever shut up about the film "ruining" their childhoods? A trailer for the project has arrived today to answer give us a glimpse into the film that may answerr those questions and more.

Something interesting to note about this trailer; it's not insanely beholden to the original 1984 motion picture. Oh, that first movie does get explicitly referenced in the opening text, while Slimer and the Ghostbusters theme pop up, but unlike the nostalgia heavy marketing for, say, Terminator: Genisys, this one doesn't just have Kristen Wiig say "We say, we came, we kicked its ass!" or have Kate McKinnon pop out a Twinkie for the sake of nostalgia points. New jokes and character dynamics are already evident from this trailer, and that's really promising for the movie itself which I hope continues that dedication to coming up with new things rather than solely leaning on the old.

As ofr the rest of the trailer, yeah, I actually really like it. It's not a game-changer in terms of editing style or choice of song, but it more than gets the job done of introducing the characters, ghosts and tone in an entertaining manner. Aside from the final gag (which seemed clumsily edited to me), the rest of the jokes worked quite well for me, and this promising trailer, as well as the high quality of the last Paul Feig feature Spy, have me eagerly awating this production!
Posted by Douglas Laman (NerdInTheBasement) at 8:15 AM