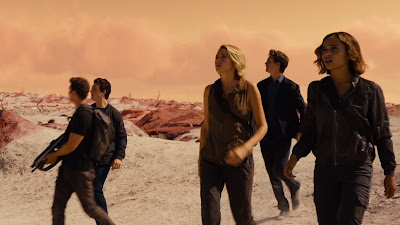 The third entry in the Divergent saga, Allegiant, got started last night with only OK results, taking in $2.35 million, a sharp decline from the Thursday night grosses posted by its predecessors. Divergent grossed $4.9 million at these screenings two years ago while Insurgent made $4.1 million at Thursday night showings just last year. To put that into perspective, that means Allegiant made 52% less than Divergent and 42% less than Insurgent last night. Yikes. Due to its smaller Thursday night numbers, allegiant will likely be less front-loaded than its predecessors, though it'll be interesting to see if it can crack $30 million for the weekend. Either way, it's unlikely to take away the number one spot at the box office from Zootopia, which has been performing like gangbusters all week and brought its domestic haul to $163.8 million yesterday.

This weekend also brings two other new releases, one of which (The Bronze) I doubt will report Thursday night numbers and the other (Miracles From Heaven) has already been playing for two days. Like its spiritual predecessor, Heaven Is For Real, Miracles From Heaven is opening two days prior to the weekend and has nabbed $3.5 million in its first two days of release. which is still $200,000 shy of what Heaven Is For Real took in on its opening day. It's likely that Miracles From Heaven falls somewhere in the $11-13 million vicinity for its opening weekend.
Posted by Douglas Laman (NerdInTheBasement) at 10:10 AM