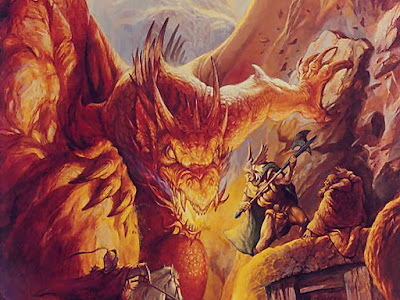 Do you know who Rob Letterman is? Well, if you're familiar with films like Gulliver's Travels, Monsters Vs. Aliens, Goosebumps and Academy Award nominated feature Shark Tale, you know his work all too well. His most recent feature, Goosebumps, was a solid effort, but his DreamWorks Animation efforts were as generic as imaginable while Gulliver's Travels was...the film that cost Emily Blunt the chance to play Black Widow in the Marvel Cinematic Universe.

Letterman was on the shortlist to direct Thor: Ragnarok (he lost the job to Taika Watiti), which was an obvious sign that he was looking to move up in the world of America cinema, and now it looks like he's hitting the big time of sorts, since, according to The Tracking Board he's just signed on to direct the newest film adaptation of Dungeons & Dragons. No word on what the story is yet, but we do know the script will be written by the scribe behind the acclaimed 2012 feature Wrath Of The Titans. According to the report, the project is looking for "a Vin Diesel type" for the lead role, though they may be able to Diesel for this film if they so wish considering the actor is a huuuge dungeons & Dragons player.

Despite being a NerdInTheBasement, I've never once played Dungeons & Dragons, so my knowledge of this franchise is limited solely to the creator of the game popping up on Futurama and the various hammy lines Jeremy Irons uttered in the previous cinematic take on this property (Altogether now: "NOW LET BLOOD RAAAAAIIIINNN FROM THE SKYYYYYYY!!!") However, I do carry a sincere life-long love of dragons (I haven't had enough experiences with dungeons to form a concrete opinion on them), so hopefully this film gives me the kind of dragon action I crave. Let's all also hope that this project is more like Goosebumps and less like Gulliver's Travels in terms of the quality presented in past Rob Letterman films.

I am not opposed to the concept of the climax of this film involving various dragons partaking in an "Oscar-licious" rendition of Car Wash.