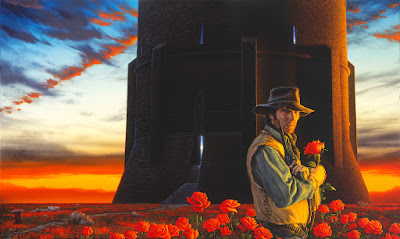 There are movies that spend so long in development hell, one can be forgiven for being more than a tad dubious that such films would ever actually reach the silver screen. Some (like box office smashes Deadpool and Avatar) do eventually get made, while the likes of Hellboy 3 and The Goon are longtime residents of Development Hell, as is The Dark Tower, a feature film adaptation of Stephen King's critically acclaimed novel. Ambitious plans for this film have existed for years now, with various actors, directors and studios circling the project before failing to get it off the ground.

Could this newest attempt at filming the novel be the one that actually comes to fruition? If today's major casting news is to believed, yeah, maybe. While this wouldn't be the first time we've had casting for a Dark Tower movie (Javier Bardem was set to star at one point), it does feel like this project is finally falling into place, even if it's unlikely they'll meet that current Janaury 13, 2017 release date at this rate. Anywho, the casting that's just been announced is that Idris Elba will play the lead role of a gunslinger named Roland, while Matthew McConaughey is playing the bad guy of the motion picture, a sorcerer named Randall Flagg.

Despite being a massive Stephen King fanboy, I'm unfamiliar with the Dark Tower text, though I freely admit I've heard nothing but good things about it. That being said, it's easy for me to get on board with this casting, simply because both actors are that awesome. Elba finally getting a lead role in a high-profile Hollywood blockbuster is great to see, the guy's way overdue for that kind of part. And McConaughey as a spell-dropping antagonist? Oh that could be really fun to see! Danish director Nikolaj Arcel (he's the filmmaker behind the original Girl With The Dragon Tattoo trilogy) is helming this project, which should have an updated release date and further casting news soon.

And now, some awesome tweets courtesy of Idris Elba and Matthew McConaughey themselves where they commemorate this casting news.

.@idriselba come and get me, I look forward to it. #DarkTowerMovie https://t.co/4gxqm2GPo3
— Matthew McConaughey (@McConaughey) March 1, 2016