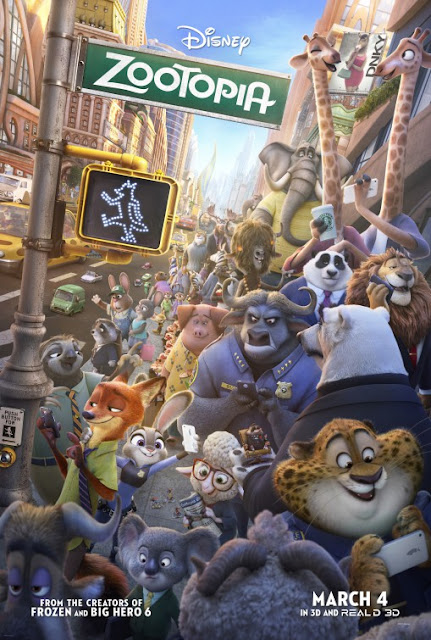 Some of the most loved rhetoric to describe gestating projects by Hollywood producers is "grounded" or "realistic", mainly as a way to give prospective moviegoers the idea that the film in question will be akin to box office hits like The Dark Knight. Typically though, the movies in question end up just diluting the color grading and making everything super gloomy in terms of tone instead of going for the rich characters and thrilling action that made The Dark Knight and other successful "grounded" and "realistic" motion pictures so unique.

Zootopia may seem like, in theory, a strange beast (no pun intended) to drag up the concept of realism considering its a film centered on a city populated by walking/talking animals, but it's kind of the perfect example of how a feature can strive for a more pragmatic storytelling approach without sacrificing all sense of jubilation. For full disclosure, the plot of Zootopia centers around a rabbit named Judy Hopps (Ginnifer Goodwin), who moves from her small town to the big metropolis Zootopia in order to become the very first rabbit police officer. She struggles to find respect among her police brethren, though her undaunted spirit keeps her going in her new position as a meter maid.

While on duty, she stumbles upon fox con artist, Nick Wilde (Jason Bateman), a fellow who just so happens to have crucial information regarding a major case involving a missing otter. As Judy and Nick try to track down the animal (who isn't the only missing critter in the area), they discover a bigger conspiracy behind the disappearing animals. The way the duo discover new information about this case may actually be one of the best charms of the screenplay for Zootopia, as all of the twists and turns they encounter are executed in a natural way that doesn't come across as a desperate ploy to grab the audience's attention via cheap "shocking" plot turns.

Every new expansion of the scope of the plot is delivered in a coherent fashion and it's just one of the many ways Zootopia manages to surprise in its deft writing. Another shining example of why Zootopia excels can be found in its handling of the concept of prejudice, which flourishes among the residents of the titular location, a sharp contrast to the idyllic vision of harmony that Judy has been raised to believe Zootopia truly is.When it comes to the concept of intolerance, Zootopia errs on the side of the abstract and doesn't make one specific animal species representative of specific real life group of impoverished individuals.

That's actually to the film's benefit, and as a good buddy of mine pointed out, it allows the film is to resemble Aesop's Fables in how it uses the guise of an animal-filled children's tale to impart valuable recollections on the idea of prejudice. Now, if this all sounds like too hefty of material for a supposedly comedic feature to grapple with, don't worry, there's plenty of fun to be found in Zootopia as well. The Disney Animation animators have a lot of fun coming up with a tremendous amount of memorable gags from just the designs of the various buildings, automobiles and environments alone. The humor in these cases stems from the way each of the designs of those entities is differentiated depending on what animal is using it (i.e. the door on a train that a giraffe uses is very much different in size for one that a gopher would utilize).

One can also find plenty of humor in the interactions between our main characters, Judy Hopps and Nick Wilde. Their dueling personalities (Hopps is practically fueled by the very essence of tenacity, while the foxy Wilde is a pessimistic as the day is long) make for some of the most entertaining moments of the motion picture. You can chalk that success up to the voice actors behind the characters, with Goodwin beaming with energy in every one of her line deliveries and Bateman exuding a cool as cucumber temperament that manages to get humorously undermined by Hopps endless resolve. In the supporting cast are great turns from Idris Elba, Nate Torrence (playing a peppy pop music and donut obsessed leopard who seems to be the animal incarnation of myself), Jenny Slate, J.K. Simmons, Shakira and story artist Raymond S. Persi as the endlessly amusing sloth Flash.

Of course, like the city it focuses on, Zootopia isn't a perfect film, particularly in one or two story beats (like when Judy returns to her hometown late into the plot) that could have been more emotionally potent if they had more time to simmer and develop. That being said, it's still a pretty top-notch effort from an animation studio that's been on a freaking roll lately, one that gives plenty of nuance and thoughts to its heftier themes as well as its humor. That's the sort of balance that makes any kind of art (family oriented or otherwise) stick around in one's mind and Zootopia certainly does just that.
Posted by Douglas Laman (NerdInTheBasement) at 11:46 AM