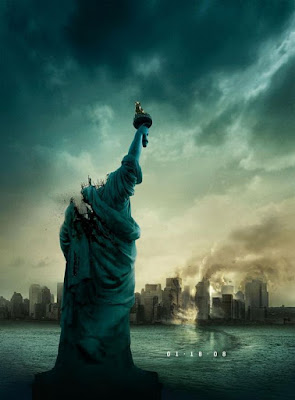 It's almost become a tradition at this point for blockbusters to feature sequences involving large scale destruction, whether you're film made in the 70's (an era where star-studded disaster movies were all the rage) or modern day big-budget efforts involving Superman, Godzilla and Transformers. Nothing wrong with some big scale chaos utilizing crumbling cities, but some of these films seem to forget that there are people living in these areas where such showdowns occur. The domains where flashy climaxes occur become more of a pile of ash by the time the credits than a proper environment for human beings to live in

Cloverfield also brings major amounts of destruction to the table, but it's got its own unique take on how to handle such ruination, specifically by putting the viewer right in the middle of a scenario that would be commonplace in any given blockbuster via the magic of the found-footage style of filming. The story here follow a select few individuals trying to make it out alive, with one such fellow being Rob Hawkins (Michael Stahl-David), a young man whose heading off to Japan for a new job and has been distant to his longtime crush Beth McIntyre (Odette Annable). During a going-away party, the power goes out, the ground rumbles, explosions go off. Confusion soon turns to terror as it becomes clear that a monster is rampaging across the city, destroying all in its path.

In the midst of this mayhem, Rob, with the help of his best friend Hud (T.J. Miller, who films almost all of the movie), his brother Jason (Rob Vogel), Jason's wife Lily (Jessica Lucas) and partygoer Marlena (Lizzy Caplan), is determined to help Beth, who is trapped in her apartment building, The five of them must undertake this all while the military attempts to take down the monster, dubbed Clover by internet fans, in escalatingly drastic fashion.

The idea to focus on the civilians navigating through the destruction caused by a conventional movie monster is quite a clever one, and Cloverfield executes such a promising conceit with notable bravado. Throughout the film, we catch glimpses of the military attempting to take down Clover, actions that would have been the centerpiece of multiple entire scenes in a traditional Michael Bay/Zack Snyder effort, but here only receive a modicum of attention. Such mayhem is always occurring just outside of frame, with the camera being solely concentrated on the normal individuals stuck in this situation.

Cloverfield was released on January 18, 2008, just a few months shy of being unveiled two whole years before Paranormal Activity, the film that would make found-footage the novel way for filmmakers to get their projects made on the cheap. This movie obviously predates such a phenomenon and it also strikes me as one of the few movies in this subgenre that justifies why this specific method of filming is being utilized for this story. For one thing, this filming style puts the viewer directly in the middle of the action, there are no wide shots to be found here to distance one from the turmoil. And let me tell you, that's a seriously terrifying having no info on what's going on as a massive cloud of dust and debris hurdles towards the camera A.K.A. you. To boot, filming the movie through a handheld camera allows for some light to be shed on the psyche of one of the characters (Hud) in the film. At first, Hud lugging around a camera and interviewing the various denizens of Rob's going-away party is just a frivolous activity done for some laughs, but once the monsters descends on the city, it becomes a form of comfort for Hud. Amidst all of this chaos that's far beyond his control or even comprehension, here is a camera that he has complete and utter command over. Basically, him filming the events that comprise Cloverfield's story become a projection of his own insecurity over the devastating events occurring around him.

Delivering some spectacle and mayhem in your average blockbuster is a totally fine idea, but a good chunk of the films that toss in this kind of carnage seem to get too lost in the parade of explosions and lose any regard for characterization. Leave it to Cloverfield to offer a unique perspective on such sequences. Here is a terrifying motion picture that actually took me by surprise in how refined it is in terms of pacing and weaving in more introspective tendencies into its plot. Hopefully the release of 10 Cloverfield Lane this weekend draws more attention to this underrated gem, cause boy howdy does it deserve it.
Posted by Douglas Laman (NerdInTheBasement) at 6:31 PM