The End May Be Near, But The New X-Men: Apocalypse Trailer Is Already Here! 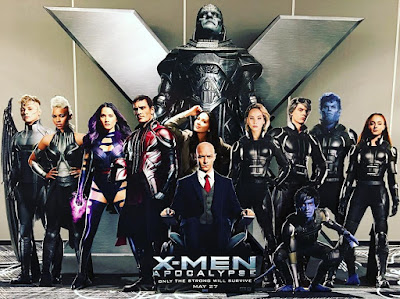 This summer, the X-Men face their greatest challenge yet...trying to get out of Deadpool's shadow. After the levity-driven Deadpool, will audiences gear up for a more somber X-Men adventure? I'd say probably (Days Of Future Past and First Class had plenty of light-hearted moments after all) but it is a good thing to keep in mind. Even after Deadpool's record-shattering box office, 20th Century Fox isn't adjusting the marketing of X-Men: Apocalypse to include more jokes or anything like that, instead continuing the more reserved tone of the teaser with this new trailer that you can watch below.

Hey, uh, I know Mystique says "You're not students anymore...you're X-Men", but how could these students really be X-Men if they're not wearing yellow outfits? C'mon Bryan Singer, a purple/green android with a yellow cape named The Vision is waltzing around in the Marvel Cinematic Universe. People are gonna be cool with the yellow spandex you disparaged 16 years ago.

One big takeaway from this trailer; it looks like Oscar Isaac's voice is being heavily modulated for Apocalypse, a sharp contrast to his vocals in the teaser which were basically Isaac's normal vocals with a slight accent. We also get to see more of Apocalypse in full body in this trailer and I like the way they show off his powers here, such as making all the people in the background around Magneto crumple up and die. There's also some cool action moments (I am loving that Nightcrawler/Angel brawl) present that make me hopeful this series can deliver on some cool superhero hand-to-hand combat in a post-Winter Soldier world.

It's harder to get a read on the emotional parts of the movie that are gonna be crucial to make this whole film work; how can I get invested in new characters (in this prequel saga) Cyclops and Jean Grey fight a God if they haven't been properly developed? Here's to hoping that's one element of this feature they knock out of the ballpark cause man are we overdue for a good film version of Cyclops. Come May 27th, we shall we if the current roll the X-Men movies have been on will come to a halt or keep on chugging.

Posted by Douglas Laman (NerdInTheBasement) at 8:36 AM