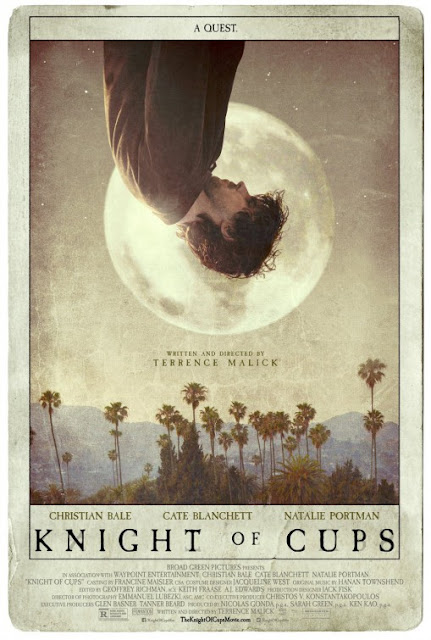 Terrence Malick is a filmmaker whose boldness should be rightfully heralded as a wonderful thing. His audacity to challenge conventional forms of narrative storytelling is something that should be looked upon as something truly exceptional. Here is an artist looking to challenge both himself and the art form he calls home. Malick has my undying respect as a director and I can unequivocally say I'll always be looking forward to his features.

I just hope that future efforts from this man aren't as terrible as Knight Of Cups.

The traits that have come to define Malick's most recent work (loads of landscape shots, non-linear storytelling, an overabundance of voice-overs) appear in an extreme capacity in Knight Of Cups, to the point of pure aggravation. Here is a film that is living and dying by the axiom of "style over substance", but alas, the style just isn't good enough to compensate for the glaring lack of substance. When it starts out, its lack of any true emotional substance of note is only irritating. By the end, that fatal flaw of Knight Of Cups was enough to make me want to avoid seeing another beach or dessert (two locales that figures prominently into the feature) ever again. What we have here is a movie that runs 118 minutes, spans multiple years and yet has nothing to offer besides assuring Exodus: Gods And Kings that it isn't the worst recent movie Christian Bale has starred in.

All of the montages of Christian Bale moping around barren environments (while his own inner monologue refuses to shut up) are hinged around a threadbare premise involving Bale playing a Hollywood screenwriter, named Rick, experiencing crippling depression after the death of his younger brother. To soothe his pain, he decides to fill the hole in his life with excess and women. This could be a great premise for Malick to utilize as a way to utilize his artistic trademarks, perhaps using the visually reliant method of storytelling he's grown so fond of as a way to explore the psyche of Rick through this traumatic period of his life.

Look, as a moviegoer, I don't need a film to hand me everything on a silver platter in terms of characterization. I love subtlety, I love nuance and I understand that Malick is attempting an unorthodox way of approaching this man and his life. But just because you're breaking tradition as an auteur filmmaker does not excuse your movie from having to adhere to the basic concept of good filmmaking. Instead, all of the avant-garde aspects of the production come across as the movie trying to compensate for a lackluster script with lots of unusual quirks and ticks. And even from the perspective of just examining the film's imagery, Knight Of Cups comes up woefully short.

Is it too much to ask for a visually abstract film to at least have noteworthy visuals? Good Lord, how I yearn for the days where the beautiful Emmanuel Lubezki imagery of The Tree Of Life could compensate for the weaker aspects of that 2011 Terrence Malick effort. All of that kind of grandeur has been replaced by shoddily shot sequences brought to life by a GoPro camera that at once induces motion sickness and incoherent shots. It's also worth noting that much of the film takes place in seedy Los Angeles areas as well as interspersed sequences set on a beach and in the dessert. Remember how Tangerine last year made the everyday environments of Los Angeles burst with personality? No such success can be found here, with all of the mundane territories that Knight Of Cups goes through being completely devoid of personality or emotional resonance. The only sequence in the entire film that has some life to it on a visual level is a Las Vegas set rave, though that's mainly thanks to an auditory factor, specifically a melancholy piece of music by composer Hanan Townshed (his score is the only redeeming aspect of the entire production in my book).

Most of the actors (especially Natalie Portman) look as lost as a fish plopped into the middle of the Sahara dessert, while the voice-over narration (which is where the majority of the dialogue comes from) becomes a joke by the time the entire ordeal concludes. Pro-tip; just because you're whispering your inane lines does not automatically give them the thematic heft of a verse penned by William Shakespeare. Even after all of those complaints (and so many others that I just can't fit into this piece, I implore readers to take away this one plea from this review: I hope others find enjoyment in Knight Of Cups. If this feature works for you or resonates on an emotional level for you personally, that's awesome. But for now, we're talking about my thoughts on this particular entry in Terrence Malick's filmography and I..., well, I didn't really care for this movie, in case you couldn't tell. Something else for readers of this piece to take away, Knight Of Cups isn't a bad movie because it's unorthodox, it's a terrible film because it refuses to utilize its unconventional techniques in the service of anything remotely interesting or emotionally involving.
Posted by Douglas Laman (NerdInTheBasement) at 10:59 AM