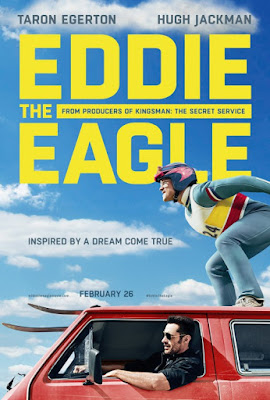 Eddie The Eagle is a feature film adaptation of real life figure Eddie Edwards (here played by Taron Edgerton), whose life-long ambitions to participate in the Olympics seem to have a chance of coming true when he discovers the art of ski jumping. With more than a little help from former athlete Bronson Peary (Hugh Jackman), Eddie hopes to beat the odds and fulfill his sports-related dreams. Basically, what ya have here is the prime premise for a conventional inspirational sports drama, and Eddie The Eagle embraces the conventions of this subgenre with aplomb, flaunting its hokey tendencies the way Jeff Wells parades his own blatantly sexist attitude towards women.

Would you believe me if I told you that the coffee rings left on a table by a young Eddie manage to miraculously look just like the Olympics logo? Or that right next to the business Eddie's dad works for is a ski lift that inspires our protagonist to set forth for the winter games? Or that Eddie has a stern father who just wants his son to give up on his dreams and embrace a more practical occupation? Or that Bronson Peary is a reclusive individual driven more by booze than anything else until a plucky guy named Eddie Edwards shows him how to believe again? Or...ya know what, I think you get the point,

Truth be told, I don't think the constant usage of such well-worn storytelling beats would be that much of a problem if the characters in the film were more nuanced, with the script settling instead for just seemingly making sure that the various inhabitants of this story are as one-note as can be. Eddie and Bronson are one-note personalities, but they get helped by being played by actors giving the characters their all (I'll come back to that point shortly). On the other hand, any figure in this plot that's even remotely antagonistic is so overtly bad/crude/condescending, they'd be too over the top for an episode of the 1980's Transformers TV show, let alone be able to organically exist in what's supposed to be a very down-to-Earth sports drama.

Even with all that being said, it's kind of hard to be too hard on Eddie The Eagle, though the aforementioned shortcomings do also make it difficult to even really like it all that much. Still, it's an endearing-ish film that's handsomely made (the editing in the ski jump sequences is particularly noteworthy) and receives a major boost from its two leading actors. Taron Edgerton takes on playing Eddie, and Edgerton gives some solid humanity to Eddie, which is really appreciated since this feels like a character who could have easily come across as a shallow dweeb with the wrong actor. Instead, Edgerton makes the characters endless determination a lovable trait, while his subtle mannerisms and body language manage to convey the characters awkward demeanor without becoming a distracting presence.

Hugh Jackman, meanwhile, fully embraces his role as the gruff but charming mentor, and he has some solid chemistry with Edgerton that leads to more than few humorous moments. Jackman and Edgerton really come through to make their parts far more engaging that than they would be in other hands, though, to the scripts legitimate credit, I'd be lying through my teeth if I said the climactic ski jump didn't have me a bit on edge in anxiety. It's corny traits keep Eddie The Eagle from being something more, but I have a hunch director Dexter Fletcher and his cast and crew weren't looking to make an all-time masterpiece with this one, they just wanted to make a slice of inspirational cinema. That doesn't excuse the films very obvious flaws of course, but, eh, there are worse things to aspire to be in the world of cinema.
Posted by Douglas Laman (NerdInTheBasement) at 10:21 AM