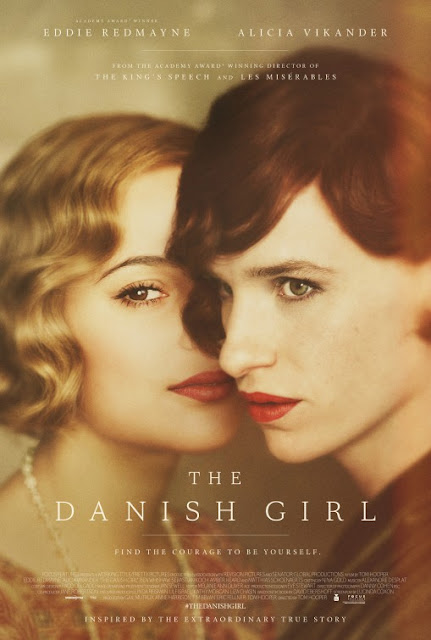 The best thing I can say about The Danish Girl is that the two main characters are in possession of a Jack Russell Terrier and that adorable doggie pops up frequently in the sequences taking place at their humble abode. I couldn't help but laugh at the dog's facial expressions which range from disinterested to distracted and such emotions amusingly contrast with the more stuffy activities occurring around the animal. Alas, the entire movie does not center around this cute canine and instead focuses its efforts on presenting on a laughably by-the-numbers take on real life figure Lili Ebe.

Before she was Lili Ebe though she was painter Einar Wegener (Eddie Redmayne), an individual who has a seemingly content life married to fellow artist Gerda (Alicia Vikander). Everything seems well for the duo until Einar discovers that he is not comfortable in his own body. He desires deeply to be a woman which tosses their relationship for a loop. Probably the best part of the movie, for the record, is that its script makes Gerda an ally to Einar. She stands by her husband's desire to be who she truly is and it's a sweet move on the part of the plot. I just wish the rest of this motion picture was anywhere near that inventive.

Here's the crippling flaw that manages to sink the entirety of The Danish Girl; the script (penned by Lucinda Coxon) seems to have no interest in delving into the psyche of Einar as he comes to grasp with who he truly is.  All of the experiences we witness involving him coming to terms with his identity feel very surface level, which means it's harder to get emotionally invested in his plight that drives the entire dadgum plot. It feels like there's a boundary separating the audience from Einar and all of the characters, a kind of divide that renders all of the individuals in the story as simply old-timey characters instead of fully fleshed out human beings.

Eddie Redmayne finds less success portraying this character than he did for Stephen Hawking back in 2014 though I did get amusement out of how his penchant for whispering recalled his hammy Jupiter Ascending baddie. Alicia Vikander is far more successful as Gerda, even if she's saddled with some ridiculously melodramatic dialogue that seems to have wandered in from a Tropic Thunder parody trailer. Meanwhile, Tom Hooper is the director in charge of this enterprise, and while I liked a number of the color choices present in the feature (loads of bright colors emerge in the environments and especially costumes), The Danish Girl is overall unremarkable on a visual level, no matter how many times Hooper trots out those wide angle shots that are so present in the motion picture they might as well be a character unto themselves.

Among the more disappointing features of 2015, The Danish Girl goes right alongside the likes of Tomorrowland and Joy as movies that could have easily been so much more but failed to capture the quality levels exhibited by past films from their individual filmmakers. There's a truly compelling plot nestled in The Danish Girl that deserved more nuance instead of a by-the-numbers plot that concludes with an ending scene so inappropriately cheesy (a scarf blowing in the breeze becomes a metaphor for how Lili is "free") I'm still not convinced it really happened.
Posted by Douglas Laman (NerdInTheBasement) at 10:16 AM