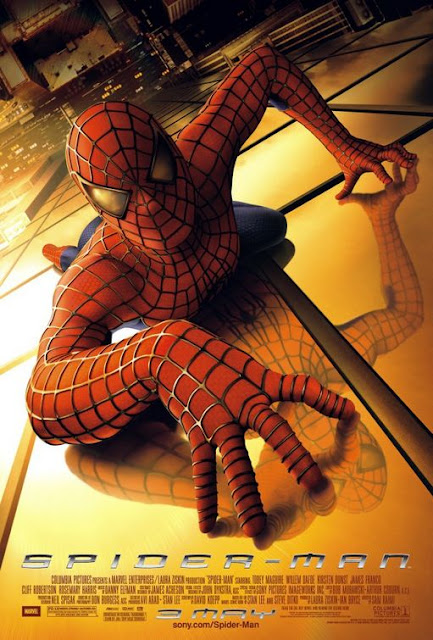 For 50 years, the thought had crept into the minds of everyone across the planet...what would a Spider-Man movie look like? For some, it was just a passing mental diversion, a notion that would fade as quickly as it came. For others, it was a concept that persisted in their cranium, imagining what the web-crawler would look like in the realm of live-action cinema. Considering how much of a grip Spider-Man had had on pop culture, it's understandable why such a proposal would have inhabited the imaginations of billions of individuals around the world. The comic book saga of meek Peter Parker gaining superhero abilities had emerged as one of the great modern-day fictional media creations.

And so, half a century after his debut in the comic book Amazing Fantasy #15, and after over a decade of aborted versions of the project, Spider-Man swung his way onto the big screen. Under the stewardship of Sam Raimi, I can only imagine what it must have been like for moviegoers to experience this film on the big screen for the first time. Honest to God, many were likely in the same position astronaut David Bowman was in at the conclusion of 2001: A Space Odyssey; staring at a force that far exceeded their own understanding. Like blockbusters of the past (such as Jurassic Park, Star Wars and Back To The Future) or tentpole features to come (The Avengers, The Dark Knight, The Return Of The King), here was a movie that delivered not only the kind of imagery we'd only dreamt of, but also tied it all together with extraordinary characters, writing and directing. This was no mere fireworks show looking to briefly dazzle the masses, this was a reaffirmation of what Spider-Man as a character could be.

Right away Spider-Man assures its audience its own good hands. The first six minutes are a master-class in economic storytelling, establishing right away a myriad of characters, dynamics and internal struggles without ever coming across as clunky. Both dialogue and visuals are utilized to convey all of this in such a short span of time, and like I said, it works like gangbusters. You immediately get that Peter Parker (Tobey Maguire) is the down on his luck kid at school whose nerdiness makes Milhouse Van Houten look like he's as suave as Marlon Brando. The brief interaction between Norman Osborne (Willem Dafoe) and his son Harry (James Franco) gets across right away their fractured dynamic as well as the fact that Norman has a fondness for Peter due to the two sharing a love for science.

For comparison's sake, at the same point that this informative and entertaining scene is finished, The Amazing Spider-Man is just now wrapping up the pointless prologue where Peter's parents leave him. David Koepp's screenplay is at once vibrantly fast-paced but also knows when to let the audience take in the nuances of the characters of this world, which, lemme tell ya, is one sublime combo that works perfectly for this story. Amazingly, the rest of the film keeps this balance of pacing and characterization perfectly in check, particularly in Norman Osborne, whose motivations for being a villain are clear (he wants to regain control of his company) and in the romantic scenes between Peter and Mary Jane Watson (Kirsten Dunst). The latter element of the film really took me by surprise in this rewatch, as both Maguire and Dunst do bounce off each other well without Maguire sacrificing the more socially awkward tendencies of his character. Their dialogue is fun, engaging and sweet as a chocolate bar, especially in adorable lines from Peter like the matter-of-factly delivered "I hunch". It's amazing how well pieces of dialogue that may have come across as clunky in other settings work when the viewer really gives a damn about the on-screen characters and their plight. Also, on the subject of the stories central romance, you can see immediately why these two find appeal in each other, even if outside circumstances pull them apart. One must also applaud the film for deftly it weaves in the darker material of Watson's personal life (namely her verbally abusive father) with the more heightened world surrounding such elements.

Since the initial release of these Sam Raimi Spider-Man movies, Tobey Maguire's portrayal of Peter Parker has become a punching bag for many, with sharp barbs and jokes aimed at his "funny faces" or how "he cries weird". It's a reductive view of his performance across all three films (yes, even the heavily flawed Spider-Man 3) that is far more nuanced than one might think on first glance, kinda like how Mark Hamill as Luke Skywalker contains more layers than many give him credit for. Maguire makes the nerdiness of Parker appealing (his passion for telling his pal Harry about the defense mechanisms of spiders in the opening sequence is a noteworthy highlight of this trait) and he's able to make this character feel like an authentic human being instead of a well-worn nerdy stereotype.

Once he gains these spider inspired superpowers, Maguire aces the various stages his character undergoes when adjusting to these newfound abilities. He's able to retain audience engagement even when his cockiness has him acting callously towards kindly Uncle Ben while you can feel his exhilaration when swinging around the city with his webbing. In short, Tobey Maguire deserves more kudos for how well he pulls off this character instead of just being reduced to many middling mocking memes. The rest of our ensemble cast is similarly top-notch, especially Kirsten Dunst as Mary Jane Watson (who makes her characters struggles feel as heartbreaking as possible) and Willem Dafoe as The Green Goblin. Dafoe can do creepy menace like few others, and like Maguire, he's able to pull off his character's gradual transition into superpowered territory with aplomb, though Dafoe's voyage down such a road is full of more evildoing, of course. Oh, and in case you hadn't heard, J.K. Simmons is a scene stealer as J. Jonah Jameson.

I'm sure Spider-Man was a thrilling rush in its initial theatrical release, the kind that instantaneously becomes one of the defining moviegoing experiences for a generation. 14 years later, that magic lives on and then some. Mr. Sam Raimi, I salute you and your cast and crews craftsmanship in this remarkable film. Perhaps the most amazing thing is that, somehow, Spider-Man 2 manages to even exceed this remarkable motion picture. Make no mistake though...Spider-Man is the real deal any way you look at it. It's got a script that has character arcs and plot points working in flawless harmony, it has top-caliber performances and it has a director with an obvious passion to bring this wonderful world to the silver screen. Every frame emanates a sense of thrilling euphoria and its nigh impossible to net get wrapped up in that absorbing atmosphere of Spider-Man.
Posted by Douglas Laman (NerdInTheBasement) at 4:53 PM