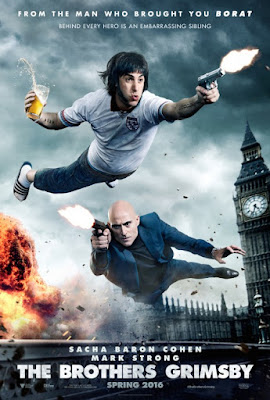 In the decade since the massive box office and critical success of Borat, Sacha Baron Cohen has struggled to replicate the affluence of that 2006 feature. He attempted to bring the mockumentary format back for Bruno in 2009 to far smaller success while his 2012 effort The Dictator went for a conventional narrative structure to no better results. His newest feature film, The Brothers Grimsby, is the first movie for Cohen to incorporate action and to not be directed by Larry Charles, instead going for Transporter 2 and Clash Of The Titans helmer Louie Leterrier. Unfortunately, Grimsby has also been a box office dud and, in my book at least, also fails to restore any luster to Cohen's lackluster post-Borat projects.

Nobby (Sacha Baron Cohen) and Sebastian (Mark Strong) grew up as brothers, with a bond as thick as blood, especially after their parents passed away. However, the two were adopted by different families, separating them for multiple decades. In that time, Nobby grew up to a naive soccer loving fellow living in Grimsby while Sebastian is a high profile spy. When the two reunite, it's under less than perfect circumstances, with Nobby (for reasons too complex to get into her) inadvertently turning Sebastian into a rogue fugitive. The two now have to team up to stop a cataclysmic threat and must also undertake a far more daunting task...rekindling their relationship after so many years apart.

Like the majority of Cohen's cinematic work, there's plenty of ribald material here that's mined for laughs. AIDS, heroin, an elephant orgy, it all comes up as the source for gags. Most of those audacious gags prompted a response from me that was less "shocked" and more along the lines of me checking my watch, only to be reminded that I don't have a watch. Bizarrely, all that gross-out material is coupled with numerous emotional sequences that the movie wants us to take completely seriously. A flashback where the titular brothers are split up is executed entirely straight-faced while the penultimate scene of The Brothers Grimsby has Nobby extolling the virtues of family like it's a bad 80's sitcom.

Extended "hilarious" sequences involving Nobby sucking on a man's testes and sincere pathos do not make for a very successful combination. Even more problematic than the all-over-the-place tone is the editing, which has the film going by at a speed that makes a bullet look poky. Entire segments of the film go by in such a blur that it feels like everyone involved is just trying to get through this as fast as possible, which at least makes the film close out just over the 80-minute mark. However, timing is a key component when it comes to comedy and the bolting style of the movie hinders a number of comedic beats from realizing their full potential. Ditto for the relationship between Nobby and Sebastian, which seems to just flip from being one filled with animosity to a charitable dynamic on a dime.

Truth be told, the only thing that saves this entire film from being a complete trainwreck are our two lead characters. Sacha Baron Cohen inflicts Nobby with an endlessly happy naivety that's extremely one-note but does lead to a number of successful gags. That kind of personality bounces off of Mark Strong well, playing a stern personality that's an obvious yin to Nobby's yang. Their camaraderie gets old by the end of The Brothers Grimsby, but it's, at least, good for a couple of noteworthy jokes. In a comedy this middling, it's practically a blessing to get some jokes that actually work, and yeah, there are enough in here to ensure that The Brothers Grimsby doesn't end up being the worst thing ever. At the same time, that's also the highest piece of praise I can offer this haphazardly made misfire of a film.
Posted by Douglas Laman (NerdInTheBasement) at 2:24 PM