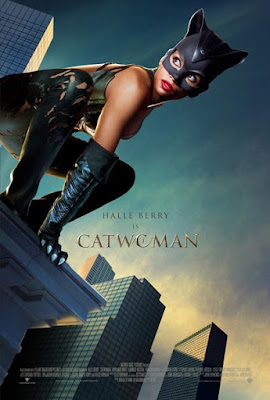 In many superhero origin movies, there's that moment where our protagonist decides to finally fight crime and fulfill their potential as a superhero. Remember when Peter Parker realized he could have stopped the mugger that murdered his Uncle? Or when Tony Stark realized the consequences of his actions of selling weapons? Or when Scott Lang was offered the chance to become a better man by the kindly Hank Pym? All emotionally resonant sequences that emphasize who our lead is and why they're going down the path of superheroics. Catwoman also has a scene like this. After giving herself a major makeover, our hero, Patience Phillips (Halle Berry), hops onto a motorcycle, speeds around her city and then stops at a jewelry store to gaze at a necklace that has caught her fancy.

It just so happens, as she's leering over this necklace she desires, that the place of business is being robbed. So she goes on, hops off the walls and takes down the criminals with vaguely S&M inspired tactics. That's it. Even Hal Jordan in Green Lantern had more motivation to be a superhero for Christs sake! Now, before Patience became essentially a stripper crimefighter, she was merely a designer for a cosmetics company. However, when she stumbles upon some evildoing the company is up to, she's killed via the method of drowning. When her carcass washes up to shore, a bunch of stray cats perform some kind of ritual on her body endowing her with the abilities of a cat.

From there, Patience becomes...Catwoman! A character bizarrely unrelated besides the name "Catwoman" to her DC Comics counterpart (though they do give her the classic comic book motif of having characters first and last names start with the same letter). Phillips is pretty damn uninvolving as a character and her transition from "meek officer worker" to "sexually charged superhero" is even more unengaging on a character level. She lacks a concrete personality in either of her human or superhero forms, instead settling for being an unintentionally humorous stereotype in both of her forms.

I don't know what costume designer thought giving Catwoman this costume was a good idea, but oh my God, what the hell you guys? Yes, the Michelle Pfieffer Catwoman suit was supposed to be "alluring" but this isn't a scantily clad outfit she's donning, it literally looks like something you'd find in the adult film parody of a Catwoman motion picture. It has no use in combat (if anything, the way it doesn't cover up any part of her upper body except for her breasts would make it really easy for bullets to penetrate her) and it's far far far more bamboozling than at all enticing on a visual level.

Really, that level of incompetence found in the costume of our lead hero can be found in every other aspect of this production, especially in the directing. I don't know if I've ever met a human being that loved their romantic partner more than Catwoman director Pitof is so obviously head over heels in love with extreme close-ups and swooping camera pans. Both of those types of shot are used so extensively that I began to develop nausea, though that sickness could also be attributed to me having to endure a screenplay chock-full of great slices of dialogue like "Guess what? It's over-time!". Tennesse Williams never wrote anything half as insightful in his decades of work as that specific action one-liner.

In the decade-plus since its release, Catwoman has garnered a reputation for being among the truly worst things ever to be associated with the term "superhero movie". It's hard not to see why it's received that sort of designation, especially considering how godawful the script (which manages to toss in both an extremely dated"gay best friend" stereotype for Patience and mumbo jumbo about mystical cat powers) is. I've seen contents of a cat's litter box that were more entertaining than this pile of garbage.

Posted by Douglas Laman (NerdInTheBasement) at 10:22 AM