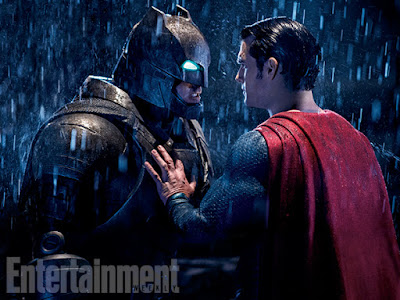 It is done. Batman v. Superman now has the biggest March opening weekend of all-time, the biggest opening weekend for a Batman movie ever and the second biggest debut weekend ever for a Warner Bros. title. How much did this gargantuan tentpole make this weekend? About $170.1 million, the sixth biggest opening weekend in history as well as the largest opening weekend ever for a Warner Bros. motion picture. It also gobbled up an enormous $424.1 million worldwide in its opening weekend, the fourth biggest worldwide opening in history. The DC Extended Universe is finally up and rolling, despite the best efforts from the critics who were all part of a very much real (and not at all something fictitious conjured up by mentally and emotionally disturbed individuals on Reddit) conspiracy against the movie.

This is a strong as hell opening weekend that can be attributed to the media blitz surrounding the movie. When Ben Affleck was cast as Batman in August 2013, everyone went nuts and that level of coverage hasn't ceased in the years since. Four trailers have popped up in the 11 months leading up to the release of Batman v. Superman as well as numerous major publicity turns like an extended comedy bit on the post-Oscars Jimmy Kimmel Live! broadcast. To boot, the ads emphasized the grand scale of the film by showing off a number of new characters in addition to Batman; Wonder Woman, Lex Luthor and Doomsday all had a major presence in the advertisements.

However, there is are some worrisome factors going forward for the film, though, frankly, it's made enough cash overseas in its opening weekend both domestically and internationally to be dubbed a hit already. That being said, this was very frontloaded film, with about 48.2% of its gross coming from its first day of release. Granted, that was to be expected given that its opening day was Good Friday, a day many have off from work, but that's still considerably more frontloaded than the most frontloaded entries in the superhero movie subgenre like The Dark Knight Rises (47.1%), Watchmen (44.4%), Avengers: Age Of Ultron (44%) and Fantastic Four (43.9%).

Combining that with the more middling word-of-mouth the film received (BvS got a B CinemaScore, the same grade given by audiences to the likes of Green Lantern and Catwoman) and it's likely the movie will be greeted with a steep decline next weekend. We shall see in just seven days, though for now, BvS should get to at least $360 million by the time its domestic run is over and well over a billion dollars worldwide. One other fun fact about this movies box office; after just three days, it's already the biggest movie ever for Jesse Eisenberg and only his third live-action film ever to cross $100 million at the domestic box office.

My Big Fat Greek Wedding 2 debuted to the tune of $18.1 million this weekend, a solid gross that's considerably larger than the biggest singular three-day weekend gross the first movie ever saw (for the record, the biggest cume for MBGFW One was $11.1 million in its twentieth weekend of release). That first movie had a way different release pattern, starting out in limited release before going wide. It's fairly obvious that this second Big Fat Greek Wedding won't come anywhere close to the first movies massive $241.4 million domestic gross, but considering the 14-year gap between movies, this is actually a pretty solid showing for this sequel.

Last weekend's two new releases rounded out the top five. Miracles From Heaven lost 36% for a $9.5 million second weekend gross for a 12 day total of $34.1 million, putting it 34% behind Heaven Is For Real at the same point. Meanwhile, the third Divergent movie, Allegiant, had by far the biggest second-weekend drop of the franchise, plummeting 67% for a $9.5 million haul this frame, taking its domestic total to $46.6 million in ten days. That;s 51% below the 10 day gross of Divergent, 45% below the 10 day gross of Insurgent and even just 5% ahead of the 10 day gross of fellow notable Lionsgate/Summit box office misfire Ender's Game. Look for Allegiant to wrap up its meager domestic run with only $65-70 million.

Right outside the top ten was 10 Cloverfield Lane, which dipped 52% in the presence of Batman v. Superman for a third weekend gross of $6 million. This Dan Trachtenberg motion picture has now taken $56 million and will likely end up with a domestic cume just north of $70 million, a great turn for this $15 million budgeted thriller. That long-standing box office champion Deadpool was just behind 10 Cloverfield Lane in seventh place and actually holding well against superhero movie newcomer Batman v. Superman, dipping only 37% for a seventh-weekend take of $5 million. Deadpool has now grossed $349.4 million and will surpass the domestic gross of American Sniper to become the second biggest R-rated film of all-time domestically by next weekend.

Two smaller indie releases rounded out the top ten this weekend with solid hauls, the first being Hello, My Name Is Doris, which took in $1.7 million at only 488 theaters, taking its current domestic total to $3.26 million. Then, in tenth place, one can find Eye In The Sky, which expanded to 123 theaters to the tune of $1 million for a solid per-theater average of $8,140. Eye In The Sky is scheduled to expand into wide release this Friday, April 1, and it wouldn't be shocking to see Hello, My Name Is Doris also expand its theater count at that time. Another indie movie projected to go wide this Friday is I Saw The Light, which debuted this weekend in 5 theaters for only $50,464 for a per-theater average of $10,093.

Overall, the top 12 this weekend was massive, grossing a spectacular $248.7 million, which is up a massive 76% from this same weekend last year and easily the biggest single March weekend gross of all-time. It's also the tenth biggest weekend in history, meaning now four of the currently ten biggest weekends ever occurred in the last 41 weeks. It's also worth noting that, through this past Sunday, 2016 is ahead of every other year on record at the same point by a considerable margin, with $2.69 billion grossed in the first 87 days of the year.
Posted by Douglas Laman (NerdInTheBasement) at 8:29 AM