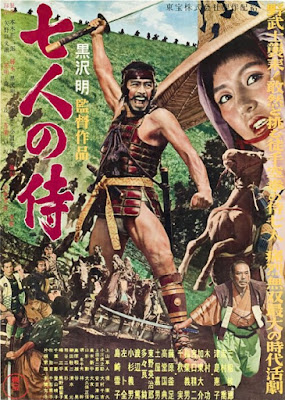 It's a testament to the quality of the 1954 motion picture Seven Samurai that its influence has so permeated American pop culture that we're still feeling it 62 years later. The film has inspired countless feature films over the numerous decades, namely in how it was remade in America into the well-known MGM western The Magnificent Seven (which is receiving a Denzel Washington led remake this year). Even when one separates Seven Samurai from its massive presence in the spectrum of the worldwide pop culture scene, one can easily see why this movies stuck around for so long.

In this Akira Kurosawa film, a village of farmers is coming under attack from ruthless bandits and annihilation seems all but inevitable. A small group of the inhabitants of this residence go off in search of samurai warriors to defend their domain, even though they have no financial way to compensate them (they intend to tide the combatants over with rice and even that goes missing shortly into their journey). Their voyage soon takes them to a ronin named Kambei (Takashi Shimura), who agrees to both aid the villagers in their task and be a master/trainer to a young man named Katsushiro (Isao Kimura).

Over time, Kambei and Katsushiro help the band of villagers acquire the services of five other samurai, with one of the samurai being an individual named Kikuchiyo (Toshiro Mifune), a character who becomes the heart and soul of the entire motion picture. When he first enters the story, he appears as a bumbling drunk, seemingly having all of the combat skills of an inert hippopotamus. Afterwards, he follows the group of six samurai much to their derision and it becomes clear to the audience that Kikuchiyo will be more of a source of effective comedy than anything else in this feature film.

But here's where the true storytelling genius of Seven Samurai is exemplified, as Kikuchiyo soon proves to be far more than what he seems at first glance. Oh he provides plenty of yuks, especially in a sequence where his pride gets the better of him as he attempts to ride a horse. But his backstory is slowly but surely revealed to both the viewer and the other samurai, and it turns out he was an orphaned offspring of villagers just like the ones he's been tasked to protect. The script does a masterful job dispensing this background information in a succinct manner while Toshiro Mifune is similarly in top-notch form ensuring that the more comedic side of this character can co-exist organically with more nuanced aspects of his personality that come forth in the later sequences of Seven Samurai.

Kikuchiyo isn't the only character to garner exceptionally more depth as the story moves along, and that may be the secret to why Seven Samurai works so well. The driving force behind this story is that the titular group of warriors must help protect this group of ragtag villagers and various conflicts and interactions between the downtrodden residents and mercenaries isn't glossed over in a two minute montage. Craft is put into the sundry of character dynamics present in the story, with maybe my favorite being the rapport between Kikychiyo and a constantly sorrowful villager named Yohei (Bokuzen Hidari).

Folks, there's a reason Akira Kurosawa is considered a silver screen legend in the grand scheme of cinema as an artform, and Seven Samurai allows one to see his visual stylings at their apex. There are so many gorgeous shots and pieces of imagery to be found in this motion picture (I particularly like the image of three of the titular samurai walking by the graves of fallen warriors in the last scene of the movie) to keep the One.Perfect.Shot. Twitter feed going for all of eternity. On a similar note, there's also a reason why Seven Samurai continues to resonate as a prominent influence of art in the 21st century. When you make a film this well made and riveting, it's bound to stick around in the pop culture consciousness for awhile.
Posted by Douglas Laman (NerdInTheBasement) at 6:34 PM