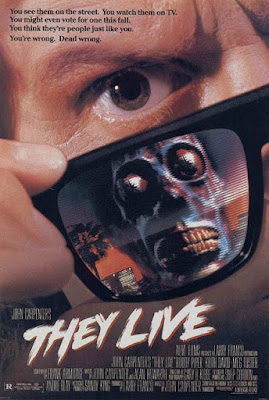 They Live seems like a B-side, if you will, to fellow 1980's sci-fi/action satire RoboCop. Both weave in heavy duty science-fiction elements (robots in RoboCop, aliens in They Live) while diving in head first into satirizing the massive amount of influence big businesses carried then (and, in many cases, still do). They Live doesn't find nearly as much success as an individual movie as RoboCop, but it's still a gonzo trip into an appropriately unsubtle caricature of our world.

The big concept at the center of this film is that our planet is being controlled by aliens who have taken on human forms to conceal their true extra-terrestrial nature. They've utilized everyday entities like advertising, magazines and television to subliminally ensure that the human race concedes to their bidding. One human being, Nada (Roddy Piper), has come into possession of some sunglasses that allows him to see the aliens in their true forms, and is now hellbent on taking them down, no matter the cost.

This wasn't the first piece of media to incorporate the idea that the powerful in our world are far more nefarious than they seem, and it obviously wouldn't be the last. They Live isn't the best use of such an concept I've ever seen, but John Carpenter is certainly a gifted enough filmmaker to make this a plenty engaging enterprise despite its flaws, such as a leading man in Roddy Piper that doesn't quite register as something exceptional. He's not wooden in his acting, he just doesn't have a lot of screen presence and his character (especially once he gains the ability to see the sinister forces at work in our lives) is written in a more unimaginative manner that evokes a generic 80's action hero rather than something more unique.

Yeah, the script (which is written by the movie's director, John Carpenter, under the pseudonym Frank Armitage) may fail to give the movie a truly exceptional protagonist, but in all fairness, this is a screenplay that does a great job doling out the mythology of the universe in an organic manner. There's a lot of information for both the audience and Nada to process and learn once the true nature of his existence is revealed, and thankfully the film rides a fine line between providing just enough exposition to make the fictitious world seem functional while also keeping an air of mystery surrounding the extraterrestrial entities (who, unless I'm mistaken, aren't even given a proper name in the feature itself).

Keith David (returning from Carpenter's other notable 80's sci-fi film, The Thing) also pops up in a major supporting role as Frank, a friend to Nada who ends up becoming his accomplice in his crusade to take down the malevolent aliens. David never gets enough credit for his acting abilities in my book and he displays real chops at playing an everyman caught in the crossfires between normalcy and a far harsher reality. I wish certain parts of They Live (namely the subpar lead character and a mishandled romantic subplot involving a TV station employee named Holly) had that level of quality going on, but hey, there's still plenty of perks to be found here, especially in a nicely handled ending that smarlty refuses to attach a concrete conclusion to this story.

Posted by Douglas Laman (NerdInTheBasement) at 8:40 AM