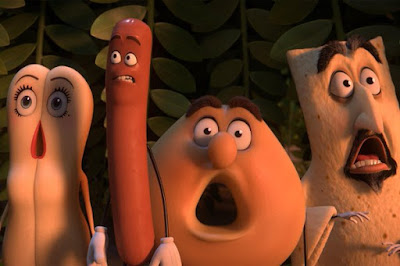 American animation has been strictly in the family-friendly zone for decades now, with forays into more adult-skewing animated fare being limited to the works of Ralph Bashki and the South Park movie. If Sausage Party, a computer-animated film about grocery food (produced by Megan Ellison, the producer behind Her, Foxcatcher and Zero Dark Thirty), takes off, perhaps that'll change, especially given how my generation is fully accustomed to the concept of animation being not just for children thanks to the ubiquity of programs like Family Guy, South Park & Rick & Morty.

Seth Rogen and pals debuted a work-in-progress version of Sausage Party last night at SXSW, where the reception to the film seemed to be an even mixture of "WTF" and gushing positivity. Check out the first Red-Band trailer for it below.
I, uh, I don't know what I just watched. All I know is it was bizarre and kind of awesome. Twisting the customary animated family movie tactic of anthropomorphizing everyday objects on its head with gruesome and religious-tinged results? Yeah, ya get my interest with that pitch, no question. Rogen's been on a roll lately with some super funny movies (his directorial debut with Evan Goldberg, This Is The End, is one of the funniest American comedies of the last few years), and combining that with my status as a major animation buff, Sausage Party always had my curiosity. But damn, now I reeeeally wanna see if they can sustain this stuff for a feature length movie (apparently, Sausage Party is only 83 minutes long with credits, so at least they're not trying to stretch it past the two hour mark). We shall al find out if Sausage Party is delicious or past its expiration date come August 12th.
Posted by Douglas Laman (NerdInTheBasement) at 10:57 AM