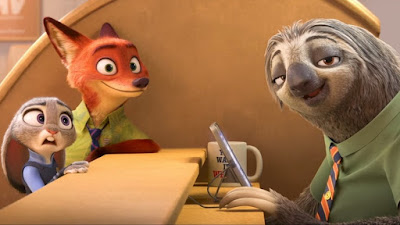 Zootopia continued to rule at the box office, dipping only 33% for the weekend for a $50 million haul in its second frame, taking its 10 day domestic total to a great $142.6 million. With no new major family movies entering the marketplace for a good long while, this likely won't be the last weekend for Zootopia to experience a solid weekend to weekend dip. To boot, the film is also killing it overseas, specifically in China, a country where American animation can sometimes flounder (Inside Out only grossed $15.3 million there last summer for instance).

However, Zootopia is just acing it in China, gathering up the biggest single day for an animated movie ever in the country this past Saturday. It's already crossed $100 million in China and will very likely crack $150 million there by the end of its run. Here domestically, Judy Hopps and Nick Wilde should have no problem crossing $200 million and may even get to $250 million when all is said and done.

In second place was 10 Cloverfield Lane, which performed solidly with a $25.2 million opening weekend. That's 37% below the bow of its spiritual predecessor, Cloverfield, though considering 10 Cloverfield Lane had half the budget of that January 2008 release such a dip feels excusable. After this solid debut the Paramount marketing team should take a bow for creating a tight and eye-catching advertising campaign that took off like a rocket just two months ago with a singularly memorable trailer and ads that promised something intense and unique.

Cloverfield plummeted after its opening weekend though it had a holiday weekend (Martin Luther King Jr. Day) boosting its grosses that obviously won't apply to 10 Cloverfield Lane though this one will have to compete with Batman v. Superman in two weeks. Also worth noting; after only three days, this is also already the seventh biggest movie of all-time for actor Mary Elizabeth Winstead.

Deadpool just won't go down, huh? In third place in his fifth weekend. Deadpool just continued to slay the competition, grossing another $10.8 million, a 35% decline from last weekend. Deadpool has now grossed $328 million and will surpass the domestic cume of Guardians Of The Galaxy by next weekend. Speaking of R-rated action films, last weekend's newbie, London Has Fallen, declined 51% for a $10.6 million gross, taking its domestic take to $38.8 million.

Debuting just outside the top 5 was The Perfect Match, a new rom-com that bowed in just 925 locations to a decent $4.1 million. That's far below the $7.4 million opening of director Billie Woodruff's last film, Addiction, but a solid bow nonetheless given its lack of major star power. Right behind The Perfect Match was another newcomer, the Christian movie The Young Messiah. Despite receiving better than average reviews for an entry into this subgenre, this one failed to ascend to box-office heaven, grossing a measly $3.4 million. In a crowded Christian movie marketplace (Miracles From Heaven and God's Not Dead 2 also arrive in the next three weeks), this one failed to stand out thanks to a derivative marketing campaign that failed to sell why it was important to center an entire movie around this period in the life of Jesus Christ.

But hey, at least The Young Messiah can comfort itself by being reminded that at least it didn't perform as badly as The Brothers Grimsby, which opened to only $3.1 million over its entire opening weekend. That's the second-worst debut this year so far for a wide release motion picture (it's only behind the dismal bow for Jane Got A Gun) and by far the worst opening ever for Sacha Baron Cohen. The last two films from Cohen really failed to gain much traction with moviegoers, but Grimsby didn't help itself with a muddled marketing campaign that eschewed showing off scenes from the movie in its TV ads in favor of audiences at a taping for Jimmy Kimmel Live! reacting to the raunchy shenanigans.

Solely promising filthy antics ain't enough, though, and anytime the characters or story were glimpsed at in the marketing, it all looked derivative of recent features like Spy and Cars 2. As crazy as this may sound, it's unlikely this one sticks around awhile at the box office and I'd be shocked if it got above $7 million in its domestic run. Against a $35 million budget, things certainly aren't looking good for The Brothers Grimsby. One other knock against Grimsby; its per theater average in its opening weekend was somehow lower than the per theater average for the 13 week old Star Wars: The Force Awakens.

In the domain of limited releases, the newest film from Gavin Hood, Eye In The Sky, debuted to good numbers, specifically $117,000 from 5 locations for a per theater average of $23,410. Those are far from record-breaking numbers, but they, coupled with its strong reviews, should be enough to warrant an expansion into more theaters. Distributor Bleecker Street is planning to bring the film into wide release on April 1. The Sally Field vehicle Hello, My Name Is Doris also debuted this weekend, grossing $85,240 at 4 theaters for a per theater average of $21,310. Not bad at all performance right there and I wouldn't be shocked to see that film also expand its theater count considerably in the weeks to come.

The Top 12 this weekend grossed $120 million, an above average gross for this frame compared to weekends past, though it was done a tiny 1% from this same weekend last year when Cinderella debuted and became the queen of the box office.
Posted by Douglas Laman (NerdInTheBasement) at 10:06 AM