Over A Decade Before Zootopia, Disney Animation Tried To A Create A World Of Animals In Chicken Little 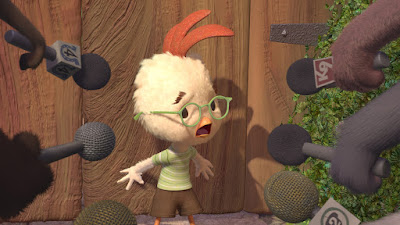 Ah, Chicken Little. As a proud Disney Animation aficionado, I can honestly say that, in the spectrum of the studios 54 (soon to be 55 with the release of this Friday's motion picture Zootopia) movies, Chicken Little easily ranks near the bottom in terms of quality. Since it's November 2005 release, the movie has basically vanished from the face of the Earth, scrubbed from Disney merchandising and swept under the rug. You won't find the likes of Runt Of The Litter as a Disney Infinity figure, and even its online fanbase is basically nonexistent. While the likes of far less financially successful films like Treasure Planet and The Emperor's New Groove continue to find fans, Chicken Little has been sent out to pasture, so to speak.


Having the film occupy such a place in pop culture feels ironic considering the amount of press that greeted Chicken Little upon its original theatrical release, though it should be noted that much of that chatter was negative in nature. Ya see, Chicken Little was the first fully computer-animated feature for the studio (Dinosaur in 2000 had live-action backgrounds with a CGI cast of characters), and the heads of Disney at the time (namely Michael Eisner) saw the future of animated filmmaking as solely comprising of computer-animation, with hand-drawn animation being the way of the past.

This rubbed many individuals the wrong way, including a 9-year-old version of yours truly, who didn't like to see an art form that had served the studio so well for nearly 80 years being tossed away. Of course, two months after the release of Chicken Little, Disney bought PIXAR and had the head honchos of out that oufit, John Lasseter and Ed Catmull, come in and take over Walt Disney Animation Studios. Hand-drawn animation was brought back for two more ventures (the underrated duo The Princess And The Frog and Winnie The Pooh), and in the end, computer animation did become the de facto way of storytelling at the Mouse House. But endeavors under the stewardship of Lasseter and Catmull like Tangled, Frozen, Wreck-It Ralph and Big Hero 6 proved to be infinitely more rewarding than Chicken Little, the movie that was supposed to start a revolution and was now the outcast of the studios output.

Taken aside from its fascinating place in the studios history, how does Chicken Little fare as a movie all these years later? Mostly not very well. This is far from being a family movie disaster like, say, Doogal (goddamn it, that movie still gives me nightmares a decade later), but it's a movie so desperate to appease everyone that it ends up lacking its own distinct identity. It wants to have all of the zany pop culture references that were dominating the animated family movie landscape post-Shrek, but it also wants to pull at your heartstrings like the best of the past features from the studio.

There's a way to combine tender pathos with irreverence (just look at the first Shrek), but this ain't it, mainly because the characters aren't built up enough to warrant one getting emotionally invested in their plight. Frankly, most of them are just vehicles to deliver unfunny non-sequiturs (a massive pig named Runt Of The Littler has an obsession with the works of the Bee Gee's, Gloria Gaynor and Barbara Streisand for instance) and never really find a way to fit into the story naturally. The celebrity-packed voice cast also proves to be a hindrance, with only Garry Marshall and Don Knotts finding success in their parts. Zach Braff is particularly one-note to the point of being grating as our hero, Chicken Little.

It's particularly sad that this film comes up short because it's the third feature-length film credit for Mark Dinal, the director of The Emperor's New Groove. That's a Disney film that never gets enough love in my book, but all of the energy, clear-cut storytelling and unique humor of that effort has vanished here in exchange for a nonsensical plot (aliens factor into the plot in the third act, and their extremely aggressive methods for their very passive reason for being here don't make much sense at all) and gags that don't work in the slightest. To be fair to Dinal though, this was a production plagued with problems, to the point where his original wish to have Chicken Little be a woman (voiced by Holly Hunter) was nixed by Michael Eisner himself. I have a hunch he's just as displeased with the final product as I am.

Examining it fully, there's a weird dichotomy at work with Chicken Little, a film whose placement in the vast history of the studio that made it is riveting, but as for the movie itself, it's just kind of a forgettable footnote in an age where Walt Disney Animation Studios was struggling to adapt to a new phase of American animation.
Posted by Douglas Laman (NerdInTheBasement) at 10:34 AM