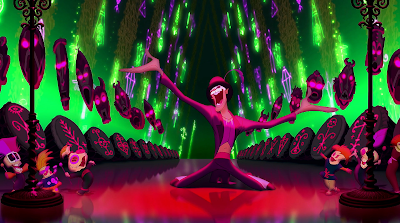 It's hard to resist the various musical numbers found in a number of the 55 films in the Disney Animation canon, but in my book there's a couple of these tunes that could definitely stand to be more well-known. Thus, I've compiled a piece to examine five songs from classic Disney features that really do deserve more recognition for their accomplishments in numerous areas. For full disclosure, the only criteria to be eligible for this list is that the song had to be from the Disney Animation canon (which excludes films like Enchanted) and could not be nominated for a Best Original Song Oscar.

Now, let's get this started, shall we?

When Will My Life Begin? (From Tangled)
Let's get this integral question out of the way....does Tangled get enough love? No, no it does not. And its music (brought to life by Alan Menken and Glenn Slater) is especially underrated, namely that opening tune When Will My Life Begin? which immediately conveys the humdrum nature of Rapunzel's life to the audience in a bouncy little ditty. This is the kind of tune that falls under the categorization of "I Want" songs that numerous classic Disney films have utilized (Part Of Your World and Belle are other notable examples of "I Want" songs). But this may be the most illuminating of these "I Want" Disney tunes in terms of characterization (though, for the record, Belle is a close second in that department), as seeing Rapunzel go through the motions of an average day in this confined environment shed light on her wide array of interests (did you know she can play guitar AND do ventriloquism???) as well as reinforce the level of stagnation that has consumed her life.

Mandy Moore's vocals also carry a large amount of responsibility for making sure this song works so well. Her voice sounds dutiful though carrying a touch of wistfulness, for the majority of the piece, but it's when she gets to sing about "the lights" that only appear on her birthday that she truly excels as a vocalist. I love how there's a clear sense of awe in her voice as she waxes poetic about how she may have finally come of age to go out and discover what's out there in the real world. You immediately understand what kind of life she's living now, the mental toll such an existence is taking on her and how tantalizing the outside world is to her psyche in just under 250 seconds. That's some quality song work in my book folks and one of the many top notch aspects of Tangled that deserves more recognition.
Out There (From The Hunchback Of Notre Dame)
The Hunchback Of Notre Dame was a departure for Disney Animation in a number of ways; its source material was not a beloved fairy tale but rather a 19th century novel by acclaimed French novelist Victor Hugo while its story was the most explicitly religious tale ever commissioned by the animation studio.Those darker underpinnings are on full display in this musical number, which, like our previously highlighted tune, also falls under the classification of an "I Want" song. Here, Quasimodo (Tom Hulce), who lives in confinement in the Notre Dame cathedral, romps around his domain singing about how envious he is of the individuals who get to live normal lives in the French city below.

The interesting thing about this musical number is that it does not solely contain Quasimodo laying out his utmost desire in song form. It actually begins with a musical exchange between the titular hunchback and his adopted father of sorts, Judge Claude Frollo (Tony Jay). Frollo is a menacing antagonist in all the right ways and the way he lathers on insults towards Quasimodo in this song, attempting to shatter the boys self-confidence, while also trying to come across as only a caring father, is masterfully executed both by the lyrics (which smartly have Quasimodo and Frollo's vocals intersect a few times) and by Tony Jay's phenomenal vocal performance. This brutal reminder of the sort of casual cruelty Quasimodo endures on a daily basis only makes his more euphoric desire to leave the cathedral that occurs in the later portion of this memorable tune all the more joyful to experience.
I Won't Say I'm In Love (From Hercules)
Yes, this editorial is dealing with underrated Disney songs, but allow me to touch on another facet of Disney animation; underrated characters, a group Meg from Hercules most certainly belongs to. She's far more fascinating than the more bland protagonist the film is named after and it's a genuine stroke of storytelling genius to make her a normal person caught up in all of this world of Greek gods and fantastical entities. She makes for an engaging contrast to the world around her and that sense of realism that makes this character so memorable comes up to the forefront in the musical number I Won't Say I'm In Love.

Instead of falling head over heels for wonder boy (AKA Hercules) after spending a most enchanted evening with the man, Meg finds herself resistant to the all-too-familiar emotions she's experiencing. There is no sugarcoating to be found from Meg as she describes resistance to fall in love again after her past bad experiences with the concept of romance and it's nice to see a conventional Disney musical number juxtaposed with more realistic emotions like trepidation and cynicism. Meg had already left a notable impression in her screentime prior to this tune, but I Won't Say I'm In Love only solidified her place as a memorable character in the pantheon of notable Disney animation figures.
Be Prepared (From The Lion King)
What would a Disney antagonist be without a memorable song to accompany their maniacal plans? For one of the most financially successful features in the entire Disney canon, such a tune comes in to the form of Be Prepared, which has the evil feline, Scar, laying out his plans to murder his brother and take over the Pridelands. The slowly escalating nature of the song (culminating in a horde of hyenas chanting their allegiance to Scar on massive rock structures) is pulled off with finesse and Jeremy Irons/Jim Cummings (the two actors share playing Scar on this track) deliver the lyrics with appropriately sinister bravado.
Friends On The Other Side (From The Princess And The Frog)
Here's another underrated bad guy song, one from a movie that serves as one of the last hurrahs of the hand-drawn animation medium in the 21st century. The Princess And The Frog has a large amount of charms to its name, but chief among them is antagonist Dr. Facilier (Keith David). His smooth and flexible movements work well with his charismatic personality and are brought to vivid life under the stewardship of supervising animator Bruce W. Smith. His various physical movements are a great example of what hand-drawn animation can bring to a characters personality on a visual level, and Dr. Facilier's showstopper musical number Friends On The Other Side also gives hand-dranw animaiton a chance to shine.

Like Be Prepared, this is another tune that has a sense of escalation to it, with Facilier going from showing new clients Prince Naveen and the Prince's valet Lawrence some "parlor tricks" to using his voodoo magic to turn Naveen into a frog in the span of one song. The lyrics, penned by Randy Newman, do an excellent job of explaining the character motivations of Naveen and Lawrence in a natural manner, nciely setting up why these two would make a potentially precarious deal with a voodoo doctor. For his part, Keith Davis is perfect in his voice performance as Facilier, playing the smooth-talking side of the character at the start of the song in a convincing manner before transitioning into the far more vicious part of the figures personality without missing a beat. Combining that vocal performance with the strong lyrics and music as well as the boldly colored and visually extravagant animation make the climax of the musical number a thing to behold.
Posted by Douglas Laman (NerdInTheBasement) at 10:59 AM