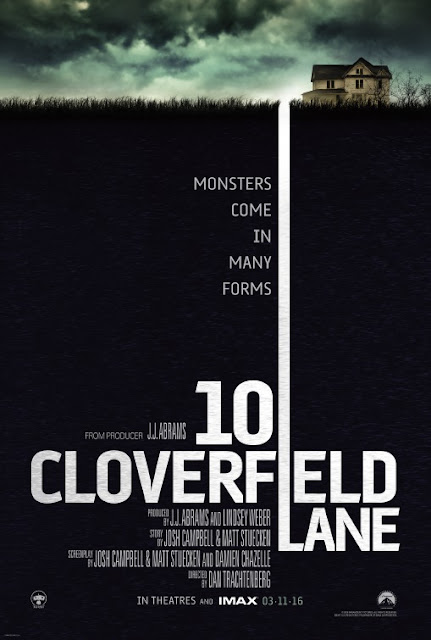 "Monsters Come In Many Forms", so says the poster for 10 Cloverfield Lane, a not so subtle nod to the film's spiritual predecessor Cloverfield. No Kaiju or even direct connections to that 2008 Matt Reeves production can be found here, but a foreboding atmosphere can be found in this new movie that's just as terrifying as any big city-destroying monster. The basic premise of 10 Cloverfield Lane emerges from one simple thought; what if you were trapped in a doomsday bunker with an untrustworthy and heretofore unknown individual?

The "you" in this equation is Michelle (Mary Elizabeth Winstead), a young woman who awakens from a car crash in an underground environment stockpiled with food, entertainment and all sorts of various essentialities needed to survive the apocalyptic scenario that has befallen the world and made everything outside of this bunker uninhabitable. Her only two companions in this tight space are the friendly Emmett (John Gallagher Jr.) and the unhinged Howard (John Goodman) who feels like the kind of paranoia obsessed fellow who should be prancing around at all times in a tinfoil hat.

Like I said, Michelle has had no prior contact with either individual prior to this doomsday scenario, so a ubiquitous sense of uncertainty hangs over every scene in the film which is only heightened by the blatantly unglued personality demonstrated by Howard. Mary Elizabeth Winstead works as a wonderful audience surrogate through her experiences in this environment in her exceptional performance, intertwining the vulnerabilities of Michelle with her firm resolve to survive in an enthralling fashion. That more vulnerable part of her personality is where this character (both in terms of Winstead's performance the script) really shines, as she feels truly like a normal person caught up in a situation way beyond her grasp.

Playing a character that alternates between feeling like a captor and a savior, John Goodman excels at being an unusual individual whose true allegiances always seem just outside of the understanding of both Michelle and the audience. Don't take that as a complaint though, it's obviously an intentional move on the movies part to keep the aforementioned enigma-esque vibe of the entire production alive and well. It's also well worth noting that Goodman plays up Howard quite well in moments both intense and humorous (despite living in a post-apocalyptic world, he still insists Emmett and Michelle use coasters for their glasses on the dinner table).

These early months of 2016 have given us quite a few first-time directors (namely Tim Miller and Robert Eggers) who have shown some noteworthy talent in their debut forays into feature filmmaking, and now Dan Trachtenberg can add himself to such a list. This guy really excels establishing himself as a unique directorial voice with his work here while also not overshadowing the motion picture in the process. Notice how well he handles the scene where Michelle meets Howard for the first time. We only see bits and pieces of Howard at first, just his hand, then just his foot, then his hip. Taking a cue from the shark in Jaws or the monster in Cloverfield allows for a suspense soaked build-up to occur during the characters introduction and that's the kind of theatricality and thought that goes into 10 Cloverfield Lane and pushes it into the realm of prodigious cinema.

I'll eschew diving into any other specific aspects of the production solely to retain a sense of mystery that's instrumental in why this thriller works so freaking well. Of course, that's not the only reason why 10 Cloverfield Lane is such a terrific feature, there's plenty of other elements present here for one to get wrapped up in. One other aspect of the motion picture I will lather some praise on is the pacing of the script, there isn't an ounce of fat to be found on this bad boy. Once the film starts, it's always building up characters, delivering thrills, many times accomplishing both of those tasks at the very same time. It's just a great experience to watch that kind of smart writing unfold on-screen. In conclusion, 10 Cloverfield Lane is almost as awesome as this Twitter exchange between Mary Elizabeth Winstead and film critic/notorious sexist Jeff Wells: 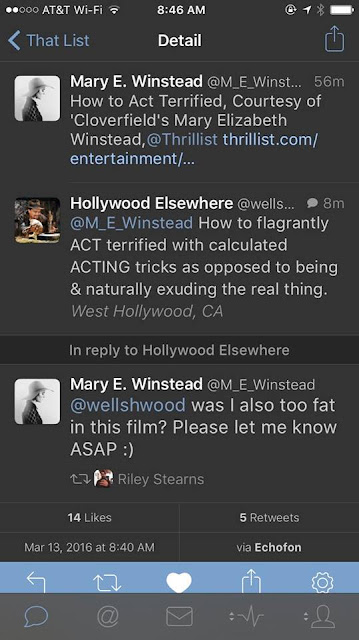