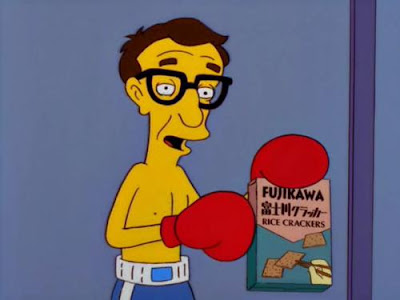 The Cannes Film Festival is a little over a month away and while which films are specifically during the high-profile event is still a hotly debated topic, we do now know which motion picture will be opening the prestigious occasion, and it's a director whose works have been a frequent participant at Cannes. The one and only Woody Allen will debut his next film, Cafe Society, at the festival as the opening film of the 2015 Cannes Film Festival on May 11th.


Unlike a number of recent Allen films (many of which have been set in a variety of European locales), new plot details for Cafe Society very much set the story of this film in America, specifically Hollywood in the 1930's. Jesse Eisenberg and Kristen Stewart will reunite for their third film with this newest endeavor, following their previous big-screen collaborations in the underrated indie gem Adventureland and last year's slight but sporadically fun American Ultra. Allen has got himself a murder's row of good actors to back up these two young leads, with Blake Lively, Parker Posey, Corey Stoll and Steve Carell rounding out the ensemble cast.

While Cafe Society will debut at Cannes in May, there's no word yet on when the film will debut in America, though Amazon Studios will be handling domestic distribution and will likely release it in the summer timeframe that recent hit films from Woody Allen like Midnight In Paris and Blue Jasmine have flourished in. As a film critic, I'm hoping Cafe Society, as a film, is much more like those two (especially Midnight In Paris, easily one of my favorite movies of 2011) than other more subpar contemporary Allen efforts like Magic In The Moonlight.
Posted by Douglas Laman (NerdInTheBasement) at 10:05 AM