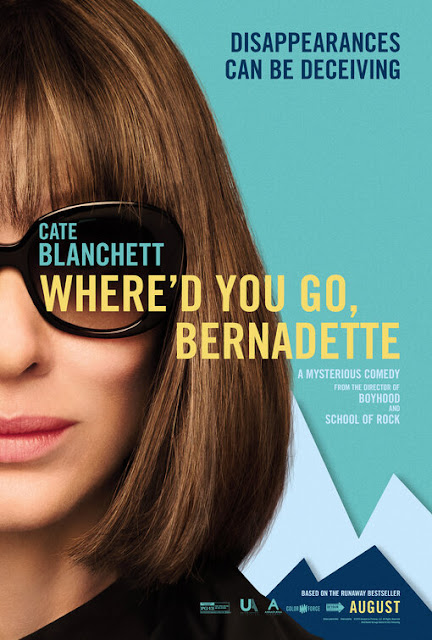 After more than a decade doing independently financed arthouse fare, director Richard Linklater, one of the best directors currently working today, uses a film adaptation of the Maria Semple-penned book Where'd You Go, Bernadette as his return to more broadly appealing commercial fare, a domain he hasn't traipsed into since that Bad News Bears remake in 2005 that history has left to be forgotten. Linklater has been on an incredible hot streak in the 2010s with films like Bernie, Before Midnight and Boyhood, which makes it all the more profoundly disappointing how underwhelming his final feature of the decade ends up being. Linklater's well-known for making quiet films but they've never been as lacking in a pulse like Where'd You Go, Bernadette.


Bernadette Fox (Cate Blanchett) is an architect as well as a mother to teenager Bee (Emma Nelson) and wife to her Microsoft employed husband Elgin Branch (Billy Crudup). Her current life is fraught with frustrations for Bernadette, whether it's in her anxiety related to an impending Antarctica trip she's going on with her family or the conflicts with other Moms at her daughter's school or how she spends her days taking care of mundane issues at her house rather than pursuing the creative spirit that drove her architect career. There's so much trouble building up inside Bernadette Fox that it's only a matter of time before she takes drastic action, which takes the form of her vanishing from her families lives.

Of all darn movies, the painless but tedious Where'd You Go, Bernadette suffers from a similar issue that plagued blockbusters like Man of Steel, Thor: The Dark World or even my beloved John Carter. Specifically, it's a problem of clumsily stopping your story dead in its tracks to relay expository information that the audience is already aware of in an unimaginative way. The screenplay, credited to a whole slew of writers including Linklater and Semple herself, awkwardly puts the plot on pause on multiple occasions to have Bernadette and later Bee consume a tediously made documentary concerning the backstory of the character of Bernadette Fox. Aside from brief appearances from Steve Zahn and Mindy Kaling (the latter in voice-over work narrating the documentary), there isn't much accomplished through these boatloads of exposition. The titular lead characters stifled nature and her influential nature is already made plenty clear prior to this, like in a scene where Bernadette is stopped by an overly passionate student whose been heavily influenced by Bernadette's work.

This piece of the script for Where'd You Go, Bernadette is more interested in robotically relaying character backstory than actually getting the viewer involved with Bernadette as a human being, a reflection of a major problem the whole movie suffers from. There's little in the way of discernable humanity in the story, whcih is especially shocking given that Richard Linklater, the king of wringing humanity out of even the most mundane of on-screen scenarios, is at the helm of this project. Despite working from an intriguing and relatable plot concerning a suburban woman contemplating how to make her life exciting again, the characters in Bernadette rarely come off as human beings, they're just mouthpieces for humdrum jokes and overly obvious explanations of their personal motivations.

The only reprieve from the lack of humanity comes in one sweet scene where Bernadette and her neighbor Audrey (Kristen Wiig) humorously talk about the prospect of trading their respective lives. Just watching both actors trade comedic observations on their lives and finding common ground over such observations turns out to be plenty to deliver some convincing humanity, it's a perfect example of "less is more". Otherwise, Where'd You Go, Bernadette comes off a startlingly artificial, whether it's in the flat cinematography that makes every overly polished locale look like a set borrowed from a Disney Channel Original Movie or in the mostly emotionally uninvolving characters. Elgin is especially a problematic figure in the story since he has little in the way of discernible personality for actor Billy Crudup to latch onto.

The character of Bee fares better simply because the loving mother/daughter relationship she shares with Bernadette feels like one of the few novel elements of the motion picture but even she succumbs to the scripts struggle with channel authentic human beings since she spends much of the third act just spouting motivational quotes and powerful declarations. And then there's Cate Blanchett, who fares the best in the cast because she is, after all, Cate Blanchett, the star of Carol! In the tragically sparse moments where this movie allows Blanchett to come alive, like when Bernadette is responding to skeptical pharmacist workers or expressing joy about progress on a big project of hers, she excels, but too often, the movie doesn't give her much to work with. Blanchett can only push this boulder so far up a big hill all on her own! Where'd You Go, Bernadette never uses Cate Blanchett to anywhere near her full potential and that's to the movie's detriment, as is the overall lack of imagination or humanity in the newest project from director Richard Linklater. Forget about Bernadette, where exactly did all the life and creativity go from Where'd You Go, Bernadette?
Posted by Douglas Laman (NerdInTheBasement) at 8:00 PM