In Laman's Terms: Post-World War II Cinema And the Power of Filmmaking as a Tool of Healing 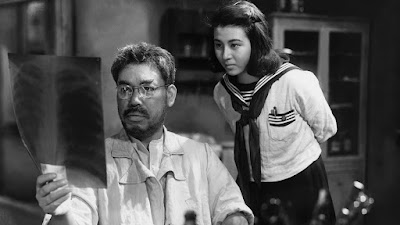 When you get a scrape on your knee, you can pour some disinfectant on that sucker and cover it with a band-aid. That process can sting a bit depending on how bad the scrape is, but there's at least a set process for how to deal with that wound. But emotional wounds, there's no instruction manual for how to grapple with those. Everybody goes about confronting those in different ways and it can be tricky to figure out just how to handle them. Do we open ourselves up to other people? Do we keep everything bottled up? Those kinds of questions were contemplated by many when dealing with the end of World War II. The large-scale battle may be over but the more intimate process of grappling with the emotional wounds of this battle were just beginning for a whole assortment of individuals ranging from soldiers returning home to Holocaust survivors to Japanese citizens.


One way people can deal with their emotional trauma is by turning to artistic mediums like filmmaking as an outlet for their perspective and anguish. Cinema had been a prominent fixture in World War II, whether it was propaganda films made by Leni Riefenstahl or the front line features helmed by the American filmmakers chronicled in Five Came Back, so it was perhaps inevitable that cinema would be used to contemplate what people would be doing in a post-World War II world. Such an idea served as the crux for William Wyler's The Best Years of Our Lives, a 1946 Best Picture winner following a trio of American soldiers returning home to their families after serving in World War II. Each of them, particularly Homer Parrish (Harold Russell), who lost both his hands in the war, finds their own individual challenges in coming back to civilian life.

The Best Years of Our Lives is an imperfect examination of the experiences of its lead characters, manly thanks to those pesky Haye Codes restrictions that plagued so much of American cinema in this era. Al Stephenson (Frederic March), for instance, is shown to have a drinking problem attributable to him coping with his time in the service, but the storyline ends up petering out, presumably because the Hayes Code wouldn't allow the feature to explore this storyline in as dark and morally complex of a manner befitting the topic of alcoholism. That having been said, it does have plenty of sequences that do succeed in properly exploring what goes through the heads of its lead characters and that's especially true in regards to Homer Parrish.

A scene where Parrish opens up to his lover about how difficult it is for him to engage in the simple process of going to bed has a brutal rawness to it that just emanates realism. Both the character and the film itself are directly confronting the notion that nothing can ever be the same in the wake of World War II, the after-effects of this worldwide conflict will be felt whether we like it or not. It's a daunting idea, but as a film like Ugetsu showed, ignoring the harshness of reality can lead only to hardship. The scene ends with Parrish and his female partner finally cementing their love for one another, a symbol of how the uncomfortable process of confronting brutal reality can end up leading to not all your problems being resolved but at least some sort of emotional healing between loved ones.

This sequence in The Best Years of Our Lives demonstrates both the importance of gazing at reality in an unflinching manner and that there are rarely tidy resolutions when it comes to the complex process of grappling with emotional trauma. Both of those traits, particularly the former, are evident in the extensive 1976 Claude Lanzmann documentary Shoah which dedicates 566 minutes to interviewing people involved in the Holocaust (including a former SS officer) and traveling to locations that previously housed concentration camps. Decades after the horrors of the Holocaust transpired, Lanzmann's film collects as much testimony about this genocide as possible to remind viewers about what happened here and the importance of never letting it happen again.

The Best Years of Our Lives is a movie about coping with a post-World War II through emotional bonds with other people. Shoah, by contrast, is dealing with atrocities so horrific that the lingering emotional trauma for survivors can't be resolved through a singular sentimental movie sequence. Smartly, the movie doesn't even attempt to posit itself as a solution to that trauma. Rather, it shows that a way to cope with this genocide occuring is to chronicle it, place a spotlight on the people who made it possible and create a work of art that can serve as a warning for future generations. This is the way Shoah uses the power of cinema an an artform to create its own sense of "healing" in a post-World War II world.

And then there's Japanese cinema. World War II was always lingering overhead of late 1940s and 1950s cinema made in this country. Films like Tokyo Story would have characters offhandedly referencing the Nagasaki bombing while the original Godzilla was all about The Atomic Age. Akira Kurosawa's 1948 directorial effort Drunken Angel, concerning a doctor, Sanada, (Takashi Shimura) befriending a troubled criminal (Toshiro Mifune), was no exception. The films cast of morally ambiguous criminals and medical professionals set against a backdrop of delipidated buildings and poisonous bogs comes off as a microcosm of the morally haywire state of the planet in the age of World War II. In this era of atomic bombs and The Holocaust, Shimura's doctor tries his best to cling to his sense of morals and help Mifune's character however he can.

These hopes result in tragedy as Mifune's character ends up perishing, leaving Sanada in such a bleak stupor. The final scene of Drunken Angel is an outstanding piece of work that sees Sanada becoming a manifestation of writers Akira Kurosawa and Keinosuke Uekusa most pessimistic perspectives on the world and the nature of people. "Once a beast, always a beast! You can never change anyone" Sanada intones. You totally understand how he could feel this way after what happened to Mifune's character as well as how somebody could develop this perception in the wake of people perpetrating the countless horrors of World War II. But then, somebody new enters the scene to serve as a manifestation of hopefulness for the future.

It's a young female patient Sanada treated earlier in the film. "Doctor! You owe me a sweet!" she says as she proudly shows him a diploma she has received. Suddenly, Sanada and the viewer is reminded that there is hope for the future. That hope does not come at the expense of just forgetting the horrors of the past but rather seeing potential in the future. Drunken Angel delivers one of the all-time great movie endings by starkly depicting the most morose possible viewpoint on the world and then sneaking in a trace of hope for the future. It's a sequence employing a complex mixture of contrasting emotions, one of the numerous traits seen in post-World War II cinema like Drunken Angel that's so strikingly reminiscent of the similarly complex nature of how real human beings cope with emotional pain.
Posted by Douglas Laman (NerdInTheBasement) at 9:00 AM