The Manchurian Candidate Is The Kindest, Bravest, Warmest, Most Wonderful Movie I've Ever Known In My Life 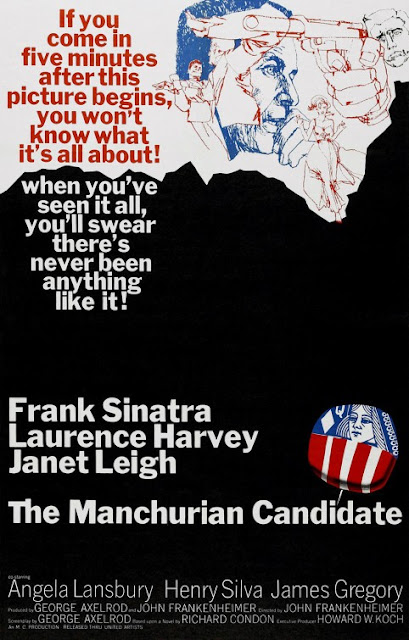 SPOILERS FOR THE MANCHURIAN CANDIDATE AHEAD

Returning home from War is always a difficult process and that couldn't be truer for Korean War veterans Raymond Shaw (Laurence Harvey) and Captain Bennett Marco (Frank Sinatra). Shaw at least has returned home a hero and with a plush job at a high-profile newspaper to help make his adjustment back to civilian life reasonably easy. Meanwhile, Marco and the other members of the platoon he belonged to begin to have the strangest dreams, ones in which they're all lined up in front a gathering of Communist leaders in order to show off how effectively American soldiers can be brainwashed. In order to demonstrate how deep this brainwashing goes, Shaw kills two of his own men without hesitation as an obedient soldier of enemy forces.


It's a gruesome dream and one that begins to reveal itself to be reality itself as Shaw begins to commit murders without even realizing it. America's biggest war hero is an unwitting murderous weapon. The recurring "dream" sequences where we see Shaw's powers as a brainwashed soldier demonstrated make it clear just how destructive he can be as well as just how clever the overall filmmaking of The Manchurian Candidate is. In these sequences, it's made clear by Dr. Yen Lo (Khigh Dhiegh in a delightful supporting role) that the American soldiers gathered for this presentation see only a gathering of friendly American gardeners in a greenhouse rather than an assortment of Communist figures in a war room.

Editor Ferris Webster seamlessly cuts back and forth between the perspectives of this scene in a quick manner. Instead of just settling on one perspective for a prolonged period of time, dialogue exchanges can take place between a female gardener and a Communist leader. In an excellent visual touch to emphasize the disorienting nature of this situation, sometimes differing environments and characters even blur together like brief moments where Dr. Yen Lo is seen giving a speech in the greenhouse. These recurring segments juggle disparate perspectives beautifully with all kinds of creative visual flourishes and a propulsively engrossing thrilling story which makes it emblamatic of the overall feature!

The Manchurian Candidate is one of those movies where everybody assembled for their jobs is perfect for the roles they've been assigned to. Legendary director John Frankenheimer, for instance, lends a chilling quality to this exciting thriller, Shaw truly comes across as a formidable killing machine in his time on-screen. This is particularly evident in how Frankenheimer executes a critical sequence where Shaw takes out his Senator neighbor and his daughter who happens to be Shaw's wife. It's a gruesome scene executed with a small number of cuts between shots and a sense of frankness to it, there's no slow-motion or other visual touches to add a sense of grandiose drama to Shaw's actions. Frankenheimer's restrained direction simply shows the slayings as ruthless and terrifying.

Playing the role of Raymond Shaw is Laurence Harvey whose absolutely exceptional in this particular role. Harvey carries a soft monotone voice and a refined disposition in his performance that sells the idea of Shaw being the kind of squeaky-clean individual who'd become a poster boy for American military excellence. However, once Shaw begins to execute people, Harvey twists those very same traits around and makes them effective tools of communicating how this character is merely a puppet for other forces to use to carry out dark deeds. In these moments, Hervey ensures that there is nothing behind Shaw's eyes beyond bloodlust and the orders of his superiors and it enhances the already eerie nature of the most violent scenes of The Manchurian Candidate.

Playing opposite Shaw is Frank Sinatra, a person whose iconic celebrity status would seemingly be distracting in a restrained political thriller. Luckily, Sinatra works just fine in the role of Bennett Marco and it's commendable how well he makes the character work on its own terms rather than just playing basically himself. Of couse, the biggest standout in the supporting cast is Angela Lansbury as a character that eventually turns out to be our main antagonist. In the Angela Lansbury performances that served as my introduction to this legendary performer, Lansbury typically exudes a trusty sweetness that runs totally opposite to her exceedingly cold-hearted role here in The Manchurian Candidate.

It's an absolute riot to watch Lansbury sink her teeth into the part of Shaw's mother, especially since, like Laurence Harvey, she's able to create a distinct personality that works on multiple levels. At first, she's a hoot as simply a devious behind-the-scenes mastermind of American political chaos. Lansbury delivers every passive-aggressive curt remark with such bite you want to recoil back in horror. But once it's revealed this character is actually working for the same enemy forces that brainwashed Shaw, Lansbury's malice-drenched performance is applied to a whole new level of maliciousness. She handles the part with incredible success and aids heavily in informing the pervasively riveting nature of The Manchurian Candidate.
Posted by Douglas Laman (NerdInTheBasement) at 2:18 PM