Believe It or Not, The Man Who Killed Hitler and Then Bigfoot Is A Contemplative Film 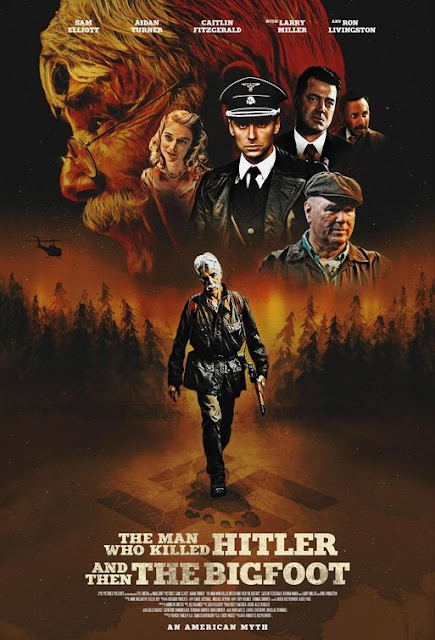 With a title like The Man Who Killed Hitler and Then Bigfoot, you'd reasonably expect this feature film from writer/director Robert D. Krzykowski to be a schlockfest that Cannon Films could have released had it come out in the 1980s. To be sure, there are moments in here that do evoke such films, such as the opening title screen that seems to have been ripped straight out of a Grindhouse motion picture. Even more prominent in how its influenced by those types of films is the whip-fast editing and frantic camerawork used when the titular protagonist, Calvin Barr (Sam Elliot), looks over a wide assortment of weapons to pick out what he'll use to fight the legendary Bigfoot.


But those moments are brief anomalies in what's otherwise a very serious drama reflecting on an elderly man looking back on his life with immense amounts of regrets. In other words, The Man Who Killed Hitler and Then Bigfoot is channeling more of the ambiance of Ernest Hemingway's The Old Man and the Sea than the trashy vibe of a Troma movie. The premise of The Man Who Killed Hitler and Then Bigfoot specifically concerns World War II veteran Calvin Barr sitting out his days in his house just engaging in routine matters. A haircut here, walking the dog there, drinks at a local bar. Nothing too special, nothing too showy.

But what nobody knows is that Calvin Barr is the man actually responsible for killing Adolf Hitler. This monstrous human being did not kill himself, rather, Barr put a bullet in his head. Such a feat has made him a legend among the few American government employees who know of his accomplishment and they come to his doorstep when it turns out that Bigfoot is not only real, but also carrying a disease that could threaten the human race. Along the way, we get a number of flashbacks to Barr's days prior to World War II (the younger version of Calvin Barr is played by Aidan Turner) that are particularly focused on his interactions with the love of his life, Maxine (Caitlin FitzGerald).

As a whole movie, The Man Who Killed Hitler and Then Bigfoot doesn't fully pull off its intended tonal feat of meshing ludicrous plot material with somber introspection. But it does manage to have those two disparate elements live in harmony more often than not and much of that comes down to Sam Elliot's lead performance. Thanks to films like The Hero or A Star is Born, Elliot's no stranger to performing in movies about elderly men carrying complex feelings about their extensive lives and he usually knows those performances out of the park. Elliot's one-of-a-kind voice that suggests a lifetime of experience and his skills as a physical performer are adept at conveying regret in a poignant manner, he's the kind of actor who can make backing out of a driveway something that puts tears in your eyes.

Here in The Man Who Killed Hitler and Then Bigfoot, Elliot best captures the films intended tone of somber reflection, especially in a scene where he monologues about how his supposedly incredible feat of killing Hitler didn't matter because the hate that man instilled in people lived on long after he died. Prior to this scene, Elliot has portrayed Barr predominately in a quiet manner, he's a guy who stifles everything inside, but here, he finally gets the chance to speak about how he truly feels about his greatest accomplishment in life and Elliot captures it with such emotionally potent frustration. It's a sensation Elliot carries on even during the scenes where his character becomes an action hero once again as he hunts down Bigfoot in the wilderness.

Believe it or not, the Bigfoot sequences aren't the major problem The Man Who Killed Hitler and Then Bigfoot faces in pulling off its intended tone. Actually, the biggest issue is a more down-to-Earth portion of the production, the various flashback sequences with a younger Calvin. Aidan Turner's performance as the young version of this character nicely avoids just being a Sam Elliot impression and instead chooses to create his own standalone person with the role and he has fine chemistry with Caitlin FitzGerald. However, both performers are saddled with some of the most tin-eared dialogue of the whole production. Elliot's performance in the modern-day sequences tends to reinforce the lackluster nature of the dialogue in these flashbacks by capturing the poignant melancholy this dialogue is aiming for in a far more subtle and effective manner.

Also hindering the flashback sequences is that a number of them, like one dealing with Aidan getting a shave from a potentially helpful Russian, tend to overstay their welcome. Whittling down these flashbacks and just leaning more on Elliot's soulful performance to communicate Calvin Barr's past would have really helped The Man Who Killed Hitler and Then Bigfoot flow better as a production. Even in its final flawed form, though, writer/director Robert D. Krzykowski's ambition does hit a number of its intended contemplative targets while still delivering a movie where Sam Elliot goes toe-to-toe with Bigfoot, which is certainly not nothing.
Posted by Douglas Laman (NerdInTheBasement) at 12:22 PM