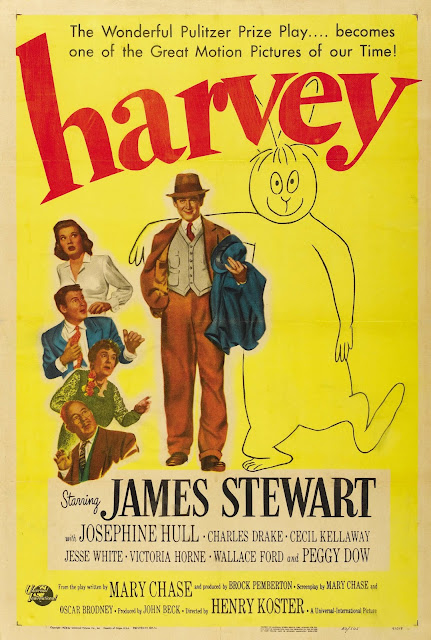 MASSIVE SPOILERS ABOUT HARVEY AHEAD

Everybody should have themselves a best friend, why should Elwood P. Dowd (Jimmy Stewart) be any different? The kindly Elwood spends most of his days hanging out at bars with his buddy Harvey and it's a friendship Elwood's sister, Veta (Josephine Hull), absolutely cannot stand. That sounds cruel, but keep in mind, Harvey is a six-foot-three-inches tall rabbit nobody but Elwood can see. Now one might understand why Veta is a bit puzzled by this friendship which she plans to fix once and for all by sending Elwood to a nearby sanitorium. Such a seemingly simple mission ends up going nowhere near according to plan thanks to all kinds of mishaps, including Veta being the one stuck in the looney bin instead of Elwood.

OK, so all that basic plot stuff about Harvey is pretty well-known at this point, I certainly knew most of that prior to watching this movie. Harvey gets referenced all the time in movies like Who Framed Roger Rabbit? or TV shows like The Simpsons. Such a distinct premise makes it an easy go-to reference when some piece of pop culture wants to convey the idea of imaginary friends. The idea of Jimmy Stewart trading dialogue with an imaginary rabbit is not a surprising sight, but what totally took me by surprise while watching Harvey was that the rabbit itself is not a figment of the lead character's imagination. My jaw was practically on the floor upon realizing that this 1950 Henry Koster directorial effort occupies a more fantastical style of storytelling.

For most of the movie, we're supposed to assume Harvey is indeed just something Elwood is making up but then Elwood mentions that Harvey is actually a Pooka, a mystical creature associated with Celtic lore. When an employee at the looney bin he's being dropped off at goes to look up the definition of Pooka, he's greeted with a sentence in the text directly addressing him by name! This is where explicitly fantastic material begins to enter the story that cements that this rabbit is an actual creature rather than a figment of a deranged mind. Subsequent moments like doors opening and closing on their own and the head of the sanitorium being able to see and communicate with Harvey, further cement that Harvey's existence is not remotely ambiguous, there's a mystical rabbit wandering around!

Also taking me by surprise with this first-time viewing of Harvey was how it's more of a wacky comedy than I expected. I don't know what kind of tone I was thinking this film carried but it was certainly something more somber than the frequently farcical nature of this production. Though it's not the tone I expected, Mary Chase and Oscar Brodney's screenplay adaptation of Chase's stage play is an extremely humorous work that gets a lot of comedic mileage out of people, particularly Veta and the employees at the looney bin Elwood is supposed to stay at, scrambling around thanks to misinformation all while Elwood just saunters along with a skip in his step right next to his best  friend.

Though Stewart's playing the character that everyone thinks is nuts for talking to a gigantic rabbit, the actor proves to be a kindly eye in the hurricane of chaos happening around him with his portrayal of Elwood as a gentle and affable soul to all who cross his path. Sometimes his depiction of this particular personality makes for a humorous sight when juxtaposed against the more cynical characters he shares the screen with. Other times, however, Stewart's execution of Elwood turns out to be perfect for delivering serious extended monologues regarding the character's kindness-fixated outlook on the world. Stewart had a gift for making these kinds of everyman characters so effortlessly endearing, he could convincingly sell you that a guy had a heart as pure as driven snow without breaking a sweat.

Such a gift is put to great use in Jimmy Stewarts' lead performance in Harvey while the rest of the cast also gets to show off their talents in playing characters predominately focused on staying one step ahead of Elwood. Jesse White is an especially amusing presence as an easily wound up orderly at the sanitorium while Cecil Kellaway as Dr. William Chumley is equally convincing as both the strict ruler of a sanitorium and as someone who eventually comes to realize that Harvey is, in fact, a real creature. These actors are all working under the direction of Henry Koster whose best visual trait in the direction of Harvey is framing a number of shots to account for the presence of the invisible titular character. You gotta account for Harvey, after all, contrary to what I believed for so many years, he is the furthest thing from imaginary!
Posted by Douglas Laman (NerdInTheBasement) at 11:35 AM