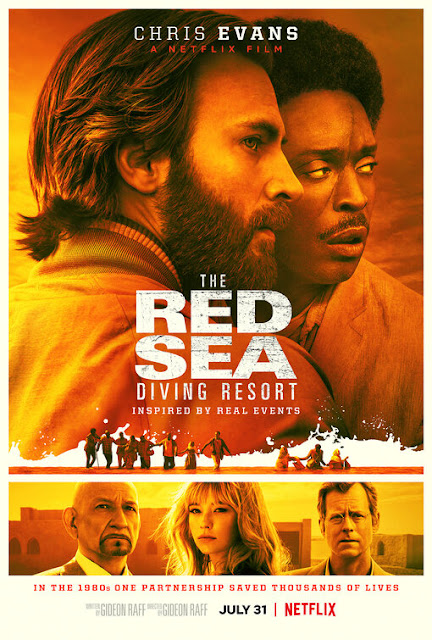 Remember the movie Million Dollar Arm? It was a May 2014 inspirational sports movie from Disney about three young male cricket players hailing from India who are recruited to be baseball players in America. They now have to adjust to an unfamiliar culture and the pressures placed on them to succeed in this specific world of sports. Despite having some fascinating challenges to overcome, they are not the lead characters of Million Dollar Arm. The lead character is Jon Hamm as the guy who recruits the trio of cricket players to come to America. His main struggle is figuring out how to score a date with his next-door neighbor Lake Bell. It's clear which characters have the more interesting story in Million Dollar Arm, but Hollywood has made it clear time and time again that the character with the white skin is always the one that gets to headline the story no matter how boring their tale is.


I was reminded of Million Dollar Arm again while watching The Red Sea Diving Resort, the newest motion picture that Netflix has dumped onto their streaming service with nary a bit of promotion (do you think leading man Chris Evans was even aware it just dropped?). The story involves Jewish-Ethiopian Kebede Bimro (Michael K. Williams) and his efforts to smuggle fellow Jewish-Ethiopians out of the hostile country of Sudan to Juraselum. It's a dangerous mission that puts Bimro's life on the line constantly since he's now an enemy to everyone in the Sudan government, which would be fascinating fodder for a feature-length film. But Bimro, somehow, is not our lead character.

Our lead characters are actually reckless secret agent Ari Levinson (Chris Evans) and four other Mossad agents who establish a hotel in Sudan called The Red Sea Diving Resort to serve as a cover for helping Bimro smuggle refugees out of Sudan. Bimro's entire perspective is shoved to the margins and never explored unless it's time for his perseverance to serve as a source of inspiration for the white protagonists. Instead, writer/director Gideon Raff concocts a baffling premise focused on Ari Levinson and company that wants the next Argo but in terms of modern-day political thrillers, it's more like last years The Front Runner in that it's boring and poorly written.

Chief among Red Sea Diving Resort's biggest problems on a screenwriting level is the character of Ari Levinson himself. The awkward ham-fisted dialogue that has every character in this movie constantly stating their current disposition makes it clear that everyone around Ari, especially his work ally Sammy (Alessandro Nivola, who just knocked it out of the park in The Art of Self-Defense), thinks he's a reckless rule-breaker with no consideration for others, he's like Mossad's own Maverick from Top Gun. But in his on-screen behavior, Levinson never acts like a loose cannon who gets results, he just comes across as a Dudley Do-Right type figure.

Red Sea Diving Resort keeps trying to force a square peg into a circular hole by constantly insisting the blank slate of a character Levinson is actually some out-of-control rebel. Even more problematic is the weird tonal shifts throughout the project that are jarring rather than interesting. While much of Red Sea Diving Resort carries a grim tone akin to a Paul Greengrass movie, there are a number of awkward attempts at light-hearted storytelling that primarily come from the movie leaning into the plot point of these Mossad agents actually having to run the titular location as an actual hotel that can entertain tourists. This leads to a baffling montage sequence cutting between Levinson and company saving refugees while also doing hotel-based activities like teaching yoga, all set to Hungry Like The Wolf (a song that didn't even exist during the 1979-1981 time period that this movie takes place in).

Such a wacky montage undercuts the numerous other sequences that try to paint this story in a more serious light, though, admittedly, those sequences were already struggling even without being juxtaposed against lighthearted montages. There's a nefarious Sudanese colonel played by Chris Chalk intended to drum up peril for the lead characters, but despite Chalk trying his best in the role, the character is written like a villain from a G.I. Joe cartoon, he doesn't fit as the for in a realistic political thriller. With such poorly written villains and heroes, The Red Sea Diving Resort is already a one-star stay even before getting into how it takes a cue from Million Dollar Arm in shoving its most interesting characters to the background.
Posted by Douglas Laman (NerdInTheBasement) at 1:08 PM