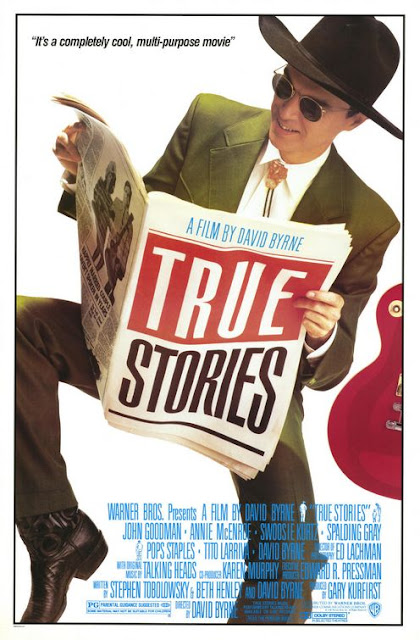 I've managed to review a bunch of low-key movies lately but none of them are as laidback as David Byrne's True Stories. The lone feature film directorial effort from Byrne, who is most famous for being a founding member of Talking Heads, explores the lives of the inhabitants of a small Texas town by the name of Virgil with all the urgency of a tranquil Sunday stroll. Such a style of pacing is a perfect fit for Byrne, who, in the role of The Narrator, wants the viewer to have time to soak in all the finer details of this town and its inhabitants. This characters fascination with Virgil, Texas results in a delightfully unique entry in the canon of Texas cinema.

The most prominent of the people that The Narrator introduces us to is Louis Fyne (John Goodman), an employee who spends his day working for a technology giant and yearning for love. He's not the only memorable figure The Narrator introduces us to. There's also eccentric wealthy recluse Miss Rollings (Swoosie Kurtz), an unnamed lady (Jo Harvey Allen) whose constantly spouting off lies about her own personal life and Ramon (Tito Larriva), among many others. Each of these people has their own lives and storylines to explore that tend to cross over with one another. It's a small town, after all, everybody's bound to know one another.

True Stories, brought to life through a script penned by Byrne, Beth Henley and Stephen Tobolowsky, is a movie revered by many people, it's the kind of film that crops up into a lot of Top 10 Favorite Films lists. For me, I didn't find it to be quite that good, less because the movies "actually the worst" and just because the muted style of humor didn't always resonate with me personally. Everything in the realm of film opinion is subjective but that's especially true of comedy. What makes one person crack up can leave another person cold. Plenty of jokes in True Stories tickled my funny bone to no end but there were also a number of gags here that simply didn't get much of a reaction, for good or for ill out of me.

Certain pieces of humor were just subdued that they just passed me right by without leaving much in the way of an impression. Perhaps a rewatch will help me to appreciate the gags that didn't work for me on this initial viewing. Hopefully, such a viewing also makes me even more enamored with the gags I currently like because True Stories does deliver a hefty amount of extremely humorous gags. Many of its most successful jokes come courtesy of the cast, including Byrne as the monotone narrator. He's so good in his comedic delivery of the characters random casual observations about the Texas landscape around him and his engaging performance bursting with restrained but no less passionate fascination with Virgil, Texas helps to inform the consistently amiable vibe of True Stories.

But the MVP of the cast may just be John Goodman in one of his earliest film roles. Watching both True Stories, where Goodman portrays a loveable lug with a heart of gold, and the first episode of The Righteous Gemstones, where Goodman portrays the quietly malicious elder statesman of a megachurch empire, for the first time in the span of a week, puts the performer's versatility on full display. He's equally convincing in roles that couldn't be more different from one another and these aren't even the only two roles he can inhabit with such believability. In the part of Louis Fyne in True Stories, Goodman is so heartwarming with his wholesome pursuit of romantic affection, he's the perfect sun for much of the stories plot to orbit around.

Though he's great in the entire movie, Goodman's best scene in True Stories has to be in the sequence where Fyne, in the middle of a date that's going awry, realizes that he likes sad songs and explores the reasoning for that interest of his. Goodman's depiction of Fyne here and throughout the rest of the feature is guaranteed to make your heart melt. The character of Louis Fyne is just oozing with humanity and the way True Stories treats him as human being rather than a caricature may be why True Stories works as a movie. David Byrne isn't making a movie to exclusively mock Texas, there's a genuine heartfelt fascination with the culture and people of this state informing the creative spirit of True Stories.
Posted by Douglas Laman (NerdInTheBasement) at 12:14 PM