Share Is An Appropriately Hard Watch From Writer/Director Pippa Bianco 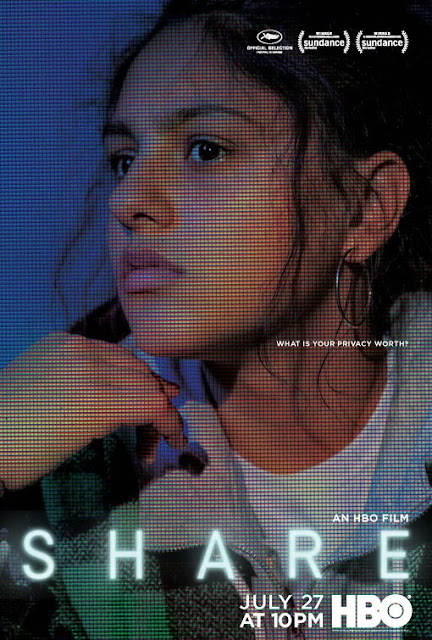 
Mandy Lundy (Rhianne Barreto) is just your average High Schooler. She likes to go to parties, she spends some time with her family, she plays on the High School basketball team, pretty normal stuff. But her life gets upended when she's sent a video of her passed out at a party surrounded by guys, many of them her own friends, mocking and assaulting her. Unable to remember the events of that night, this video is the only piece Mandy has of the mysterious puzzle that is that fateful evening. At first, she tries to keep it under wraps and barely even responds to it, but soon her parents get wind of it and that's when her already disrupted life gets altered even more drastically.

Writer/director Pippa Bianco expands on her short film of the same name for her feature film Share, which tackles a story very much rooted in the modern world as the video of Mandy gets spread across cell phones and social media. One of the ways Bianco approaches this plot is to place a primary emphasis on Mandy being a vessel to explore the various complex experiences of grappling with sexual assault. Now, Mandy gets character traits beyond just how she reacts to that fateful night she can't remember, but Bianco's goal for this production is clearly about exploring how Mandy responds to all the ripple effects of that night rather than having her go through a traditional tidy three-act character arc.

This allows Mandy to have an intentionally vaguely-defined nature that allows her to be a Rorschach Test, of sorts, for prospective viewers who have been through a sexual assault experience, they'll be able to see themselves within this protagonist. Plus, this focus on just exploring Mandy's experiences in the wake of being sexually assaulted ends up unearthing plenty of humanity in the protagonist of Share, so it's not like exclusively exploring this part of Mandy is eschewing the chance to know her as a human being. Share's script uses this character to fascinatingly explore all the ways, both big and small, Mandy's life begins to unravel in the wake of this video surfacing. Pippa Bianco's screenplay makes the new status quo of Mandy's life appropriately hard to watch, especially in the most seemingly casual of dialogue exchanges, like when Mandy inadvertently runs into her best friend and one of the guys who participated in that video at a 7-11 right after Mandy's informed the authorities about what's happened to her.

In this exchange and throughout the rest of the film, Bianco incorporates an unpolished nature to the interactions that subtly reinforces how everybody, especially Mandy, is now stuck in uncharted waters. Mandy's bestest lifelong friends don't have prepared elaborate inspirational speeches to give her, instead, they fumble around for words and aren't sure of what to say to Mandy. This unpolished approach is especially effective when it's applied to the lead character of Share. Both Bianco's script and Rhianne Barreto's lead performance depict Mandy being in a quiet and aching state of uncertainty over what to do, she's never 110% confident on the decisions she's making in the wake of this video surfacing.

Share normalizes the idea of survivors of sexual assault being simply vulnerable human beings capable of not having all the answers. Similarly, realistic nuance is found in the interactions between Mandy and her parents, played by Poorna Jagannathan and J.C. Mackenzie. The element of realistic uncertainty is just one of the many ways Bianco's script explores the aftereffects of Mandy's sexual assault experience. This leads to a feature that certainly can't be critiqued for not being in-depth, though some of these major developments in Mandy's life did need more room to breathe. Certain parts of the film do feel like they rush by in the blink of an eye much to the detriment of the character of Mandy. More often than not, though, Share does delve into the nitty-gritty of the perspective of its lead character to harrowing results.
Posted by Douglas Laman (NerdInTheBasement) at 10:52 AM