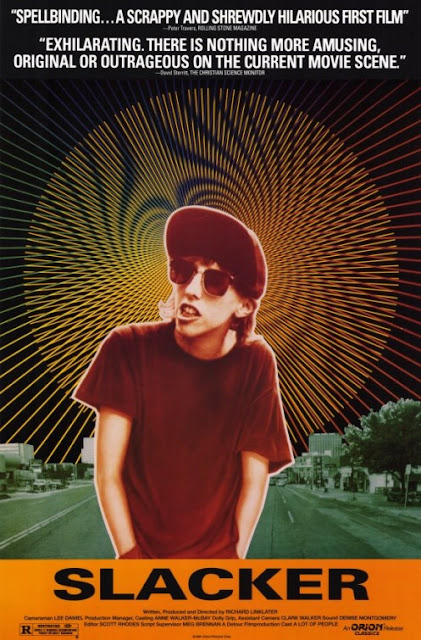 Having already written an extensive piece about Slacker for The Spool, I've already said plenty about this Richard Linklater directorial debut. But though it may be as casual as a gentle breeze floating through the air, Slacker offers up so much to viewers that there's still plenty to talk about in regards to this motion picture. Said motion picture follows the lives of a whole assortment of Austin, Texas citizens which feels in line with how writer/director Richard Linklater has frequently found plenty to be enamored with in the casual lives of everyday people. Unlike the majority of his films concentrating on that subject matter, though, Slacker doesn't have a protagonist to serve as a recurring fixed point for the audience to return to.


Instead, Linklater only focuses on a person for a handful of minutes. Even the very first individual in the story, played by Linklater, himself, vanishes after the first five minutes of Slacker. The camera in Slacker is constantly gliding from one life to the next in a fashion that's both agile and effective. Linklater's works rarely get their due for their quietly impressive pieces of camerawork and such camerawork appears once again in Slacker, most notably in an opening sequence that uses an extended single-take shot to follow numerous different peoples reactions to the sight of a woman who has fallen down in the middle of the road.

Through this carefully filmed sequence, we get to meet an array of clearly defined personalities (a jogger, a business card wealing guy in a car, etc.) all in the span of a single shot. It's a brilliantly executed scene on so many levels but especially on a visual level that exemplifies how Slacker uses its camerawork to explore so many different people while still maintaining the crucial loosey-goosey hangout vibe that defines Slacker. After all, would you expect a movie titled Slacker to have an ambiance defined by anything else beyond chillaxed mellowness? This attitude is maintained in the masterful camerawork throughout the whole feature even while Linklater and cinematographer Lee Daniel manage to still impress with their visual chops in how they use camera movement to organically segway from one character to the next.

Camerawork isn't Slacker's only visual attribute that impresses. The way it captures its characters in more worn-down parts of Austin reinforces the realistic sensibility of the production. Instead of using world-famous Texas landmarks or stereotypically Texas locales like ranches as the backdrop for Slacker, the movie opts for more unique locations for its characters to inhabit, ones that typically have all kinds of evident wear-and-tear on them. Just as the various characters Slacker briefly focuses on feel authentic to people you'd meet in the real world, so too do the graffiti-laden walls of the Austin, TX buildings the characters walk by feel like they came straight out of reality.

There's an enjoyable lack of polish found in both the characters and environments in Slacker that ensure the film isn't an artificial recreation of Texas on some soundstage, Linklater's thoughtfully placed camera is capturing a world whose tangible flaws make it clearly recognizable as authentic. Such authenticity would also be found in abundance in future Linklater efforts like Boyhood and the Before movies and we all owe it to Slacker for paving the way for what was to come in Linklater's directorial career. When you make a film as discernably real as Richard Linklater's inaugural motion picture Slacker, that's how you establish yourself as a filmmaker worth keeping an eye on.
Posted by Douglas Laman (NerdInTheBasement) at 5:18 PM