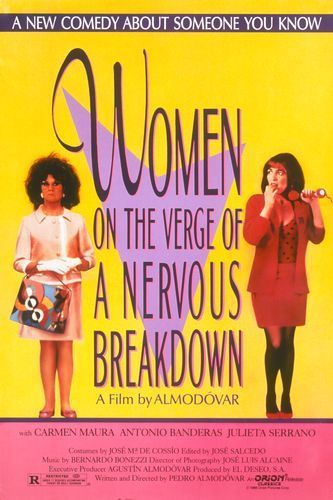 And in the newest edition of Iconic Filmmakers Douglas Laman Has Somehow Never Watched Before Now, let's turn to Pedro Almodovar. One of the most iconic Spanish filmmakers of all-time, Almodovar has had a steady string of successes as a director for nearly four decades now across a multitude of genres and early acclaim for his newest movie, Pain and Glory, indicates his successful creative streak is in no danger of ending anytime soon. However, his 1988 motion picture Women on the Verge of a Nervous Breakdown was the movie that brought him to a whole new level of worldwide prominence as a filmmaker and in retrospect, it's neat to see that this feature was able to resonate so deeply with worldwide audiences. Not just because it's a good movie (which it is, for the record) but also because it's such a unique creation, it's not a conventional feature by any stretch of the imagination and to see audiences respond to it with such positivity is wonderful to see.


The most prominent of the women referenced in the title of Women on the Verge of a Nervous Breakdown is Pepe Marcos (Candela Maura), a woman who works as an actor on television and as a dub voice-over performer. What exactly has gotten her so blue that she's about to have a nervous breakdown? Well, her boyfriend, Ivan (Fernando Guillen), has just broken up with her. This romantic betrayal causes Pepe to be gripped by emotional turmoil and she responds, in kind, by going on a rampage in her apartment that includes setting a small fire on her bed. Her day is already gripped with chaos when her friend Candela (Maria Barranco), as well as Ivan's son from another relationship Carlos (Antonio Banderas), arrive at Pepe's doorstep.

Just their presence alone is enough to make Pepe more frazzled but it turns out Candela is carrying some pretty shocking news. Candela has just found out that an ex-lover of hers is connected to a terrorist cell that has plans to kidnap a flight headed to Stockholm. A plot that starts out as simply being about a woman coping with heartbreak that turns into an elaborate premise involving thwarting a terrorist cell, a gun-toting lady and some spiked gazpacho? Women on the Verge of a Breakdown clearly owes more than a trace of its identity to classic Screwball Comedies, a genre of the 1930s and 1940s that many modern-day movies try to homage to varying degrees of success. Screwball Comedies are a lot like juggling, it may look easy from afar but pulling it off well takes a lot more skill you'd expect.

Write/director Pedro Almodovar manages to accomplish a modern-day entry into this genre by throwing realism into the end, this is a film that wears its melodramatic tendencies on its sleeve. Characters express their emotions in big bold ways, like setting a bed on fire, dumping pills into a jug of Gazpacho or holding everyone in a room at gunpoint. Though the experiences of Pepe Marcos and company can echo real-life emotions, their responses to those emotions are as intentionally distanced from reality as can be. There are no half-measures when it comes to embracing over-the-top material in Women on the Verge of a Breakdown and this allows its story to organically inhabit the similarly stylized sensibilities of a Screwball Comedy.

The visual style of the production nicely reinforces the heightened nature of the humor and characters, including the brightly-colored apartment Pepe Marcos calls home that has an intentional sense of artificiality to it in its appearance and structure that allows it to properly function as a place for wacky comedy rather than as a believable place to call home. Another similar visual trait is Almodovar's recurring tendency to place the camera in a position that makes small household objects like a phone immensely large in size. This carefully executed visual motif not only creates some distinctly memorable shots but it reinforces how everything in this story, whether it's the emotions of heartbreak felt by Pepe or a ringing phone she needs to answer, is played up with a sense of massive scale.

Clearly, both the writing and visuals of Women on the Verge of a Breakdown help accentuate its unique aesthetic merging classic Screwball Comedy and melodrama storytelling tendencies with its own idiosyncratic identity and the same can be said for the talented group of actors who totally throw themselves into this unorthodox production. This is especially true of Candela Maura who just oozes boldness in her lead performance as Pepe Marcos. She's endlessly engaging with her on-screen personality and the way she effortlessly rolls with whatever new piece of chaos Almodovar throws at Pepe and the viewer is critical to getting the audience to accept the endless amount of enjoyably over-the-top places Women on the Verge of a Breakdown travels to.
Posted by Douglas Laman (NerdInTheBasement) at 10:01 AM