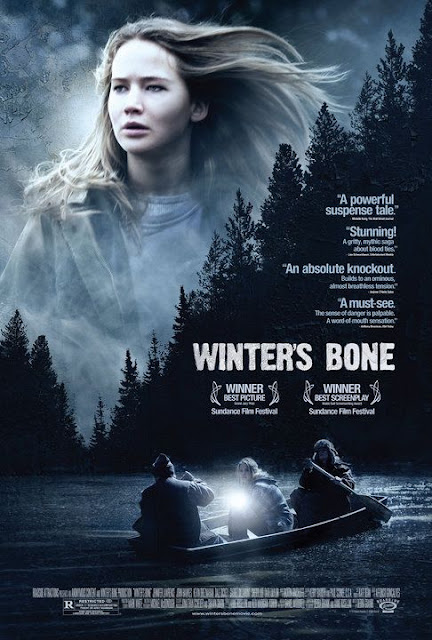 Let's go back in time to 2010. It's the start of another decade. The iPad is the newest gizmo from the mind of apple. Kate Gosselin is trying to make Kate Plus Eight a thing. The House That Built Me is dominating the Billboard Country Music charts. And in June 2010, Winter's Bone got released to widespread acclaim and in the process, launched the career of one Jennifer Lawrence. Only the fourth movie she ever appeared in, Winter's Bone immediately propelled Lawrence onto the pop culture radar and her place on that radar would be cemented in the years to come with major hits like The Hunger Games and Silver Linings Playbook.


But it was in Winter's Bone that Lawrence first emerged as a talent worth keeping an eye on in what may still be her finest work as a performer. Working with a script penned by Debra Granik and Anne Rosellini and under the direction of Granik, Lawrence stars as Ree Dolly, a seventeen-year-old residing in Missouri with her two younger siblings and her mentally ill mother. One day, she's informed that her distant father needs to meet a court date or else the state will repossess the house Dolly and her family reside in. Staring down the barrel of homelessness, Dolly begins a quest to track down what exactly happened to her father, one that involves her seeking answers from neighbors and relatives that would rather Dolly not go snooping around for the truth.

Much like this year's excellent Little Woods, Winter's Bone brilliantly transfers the mood and certain elements of a classic film noir to a flyover country setting. In the case of Winter's Bone, this means we get a story about a singular determined individual (Dolly Ree) trying to track down answers to a mystery in a setting where everyone, criminals or cops, are cast in shades of moral grey. Such a story takes place in a run-down part of the Ozarks in Missouri that's realized with astonishing levels of tactility. Both Debra Granik's directing and Michael McDonough's cinematography make the world Ree Dolly inhabits so visually tactile that you can practically taste the frigid winter air or feel the peeled off paint on the side of a barn.

Their skills in terms of visual storytelling create such a haunting quality to the crumbling farmyards Dolly navigates, they come across as mere whispers of what once used to be a much louder and vibrant terrain. In the middle of such evocative imagery is the character of Ree Dolly who is brought to life with all kinds of tenacity courtesy of Jennifer Lawrence. Everyone around Dolly wants her to just stop looking for answers and go back to her own life but Lawrence makes it apparent from the start that Ree Dolly is a survivalist. No matter how much the odds are stacked against her, she's gonna stand up to the challenges in front of her with all kinds of gumption.

Lawrence realizes that part of Dolly's personality so vividly that it makes a crucial sequence showing Dolly trying to sign up for military service all the more emotionally powerful because of it relying on Lawrence portraying Dolly being open and vulnerable. She can't afford to do that out there as she tries to keep a roof over her sibling's heads, but here, talking to this recruitment officer, she opens up about her age, her uncertainty over plans for the future and how she doesn't totally understand what she's getting herself into with military service. In this scene, Lawrence outstandingly renders in such quiet terms Ree Dolly being so open about her lack of options in her current financial state (her primary reason for joining the service is for a hefty paycheck).

Also in the cast are always reliable character actors John Hawkes and Dale Dickey, both of whom deliver some strong work in critical supporting roles that end up going in mighty unexpected directions in regards to their eventual dynamic with Dolly Ree. Much like with the actors in Chloe Zhao's Songs My Brothers Taught Me, I love how Debra Granik allows actors like Hawkes, Dickey and other members of the supporting cast to actually look like people you'd really encounter in Missouri or in any small town. The reliance on realism in the casting is one of many ways Winter's Bone ensures that the experiences of Dolly Ree practically ache with authenticity, which only makes her story in this feature film all the more engrossing to watch.
Posted by Douglas Laman (NerdInTheBasement) at 2:31 PM